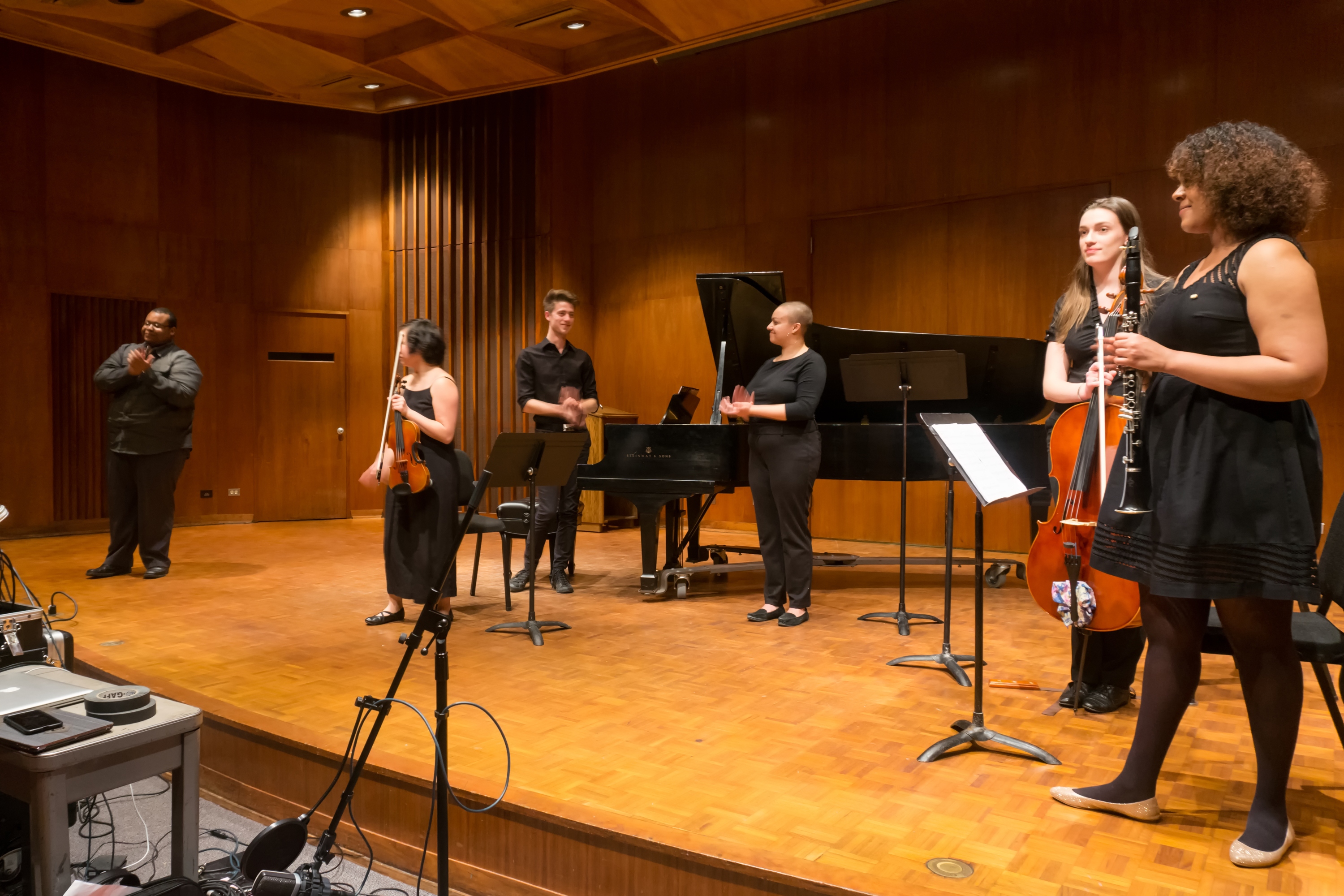 It is always a moving experience going to a concert with little to no idea about what it will be like beforehand and leaving fulfilled —ruminating on sounds, their inspirations and what they consequently inspire. This past Sunday, I had this privilege when hearing a wide variety of works from composer and Lecturer of Music Evan Williams ‘11. Throughout all of his pieces, I was not only taken aback by the deep exploration of sound, but also how it affected me physically—be it through how I perceived it and how it affected my ears, or through the visceral, concrete feelings that occurred within me.

The opener, a piece played by Williams on trombone—his instrument when he was an undergrad at Lawrence—with electronics, was dedicated to Associate Professor of Music Nick Keelan, Williams’ teacher. The piece set the tone for the rest of the concert, Williams’ playing and composing using electronics to interact with soundscapes and gestures and to create a sonorous blend of acoustic and synthetic sounds, all the while being fully organic. “Amber Waves” allowed Williams to transform Harper Hall into an actively resonant space, deep trombone frequencies coated in reverb, accentuated by hypnotic overtones both manipulated and not. The piece also relied on moments of reflection in which Williams would put down his horn, bow his head and listen to the rich world of tones.

If there was one piece that really showcased Williams’ distinct voice in writing for acoustic instruments and electronics interacting live, “if/else” was it. The five-movement work featured a myriad of ways in which electronics and flute could weave in and out of one another, some sounds produced still sounding like a flute, and others completely warped, chopped and screwed to create wild, blistering textures that bubbled under and over its sometimes harsh, sometimes subdued foil. The most exciting part about this piece was that so much of it was completely random, the program deciding what to do based on the flute, isolated from any infusion of past experience or emotion. While based in coding logic, the music generated seemed to defy just that, offering an experience that constantly surprised me and got me thinking about the complexity of sounds that can occur within a matter of seconds.

This recitation of Edgar Allan Poe’s poem of the same name had Williams performing again, this time in spoken-word accompanied (and sometimes drowned out) by heavy electronics and field recordings of various bells. Despite having bells and voice move throughout via quadraphonic speakers, the atmosphere evolved subtly, interacting with the live reading smoothly. The music heightened the somber, unsettling feeling emanating from the words, solidifying Poe’s art and taking it to new places.

The first composition in the recital without the presence of electronics, this solo for alto saxophone still maintained Williams’ knack for investigating the crevasses between sounds and using them in musical ways. The piece was strenuous and filled to the brim, and it was an unexpected but exhilarating programming choice to wedge it between the spacey eeriness of “The Bells” and the simmering power of “Utterings.” This piece worked well in its place, throwing the audience for a loop and giving the program a spike right in the its middle.

This work of fixed media for quadraphonic speakers was one of the more concrete yet elusive pieces I have heard—both in the concert and in general; “concrete” because I so intensely heard and felt the sounds all around me, often instigating strong visuals behind closed eyes and “elusive” because I am having trouble recalling what I heard and saw, and how exactly it made me feel. However, my awareness of the sensations I experienced while in the moment are as strong as ever, their lingering effects are something I value more than remembering the specific sensations themselves.

A world premiere closed the concert on a heavy note, rooted in history just as much as it is in the present. Sixth-year Keira Jett commissioned the work, which consisted of four poems—all by African American women involved in the Abolitionist Movement—set to music by Williams that she chose. Jett, a mezzo-soprano, was accompanied by clarinet, violin, cello and piano; this composition was one where Williams had written more vertically, using harmonies and experimenting with the way certain voices sounded together, all bending and evolving to meet each other on a common ground. While the preceding five compositions provoked thought about sound, “A Mother’s Love” also provoked thought about the past, present and future worlds, hopefully leaving everyone in the audience with something to take home. But since nearly all art is giving, I can only hope that the listeners on Sunday night gave, or will give, back.

Performers in Evan Williams’ recital stand onstage in Harper Hall. Photo by Taylor Blackson. It is always a moving experience going to a concert with little to no idea about what it will be like beforehand and leaving fulfilled —ruminating on sounds, their inspirations and what they consequently inspire. This past Sunday, I had this…