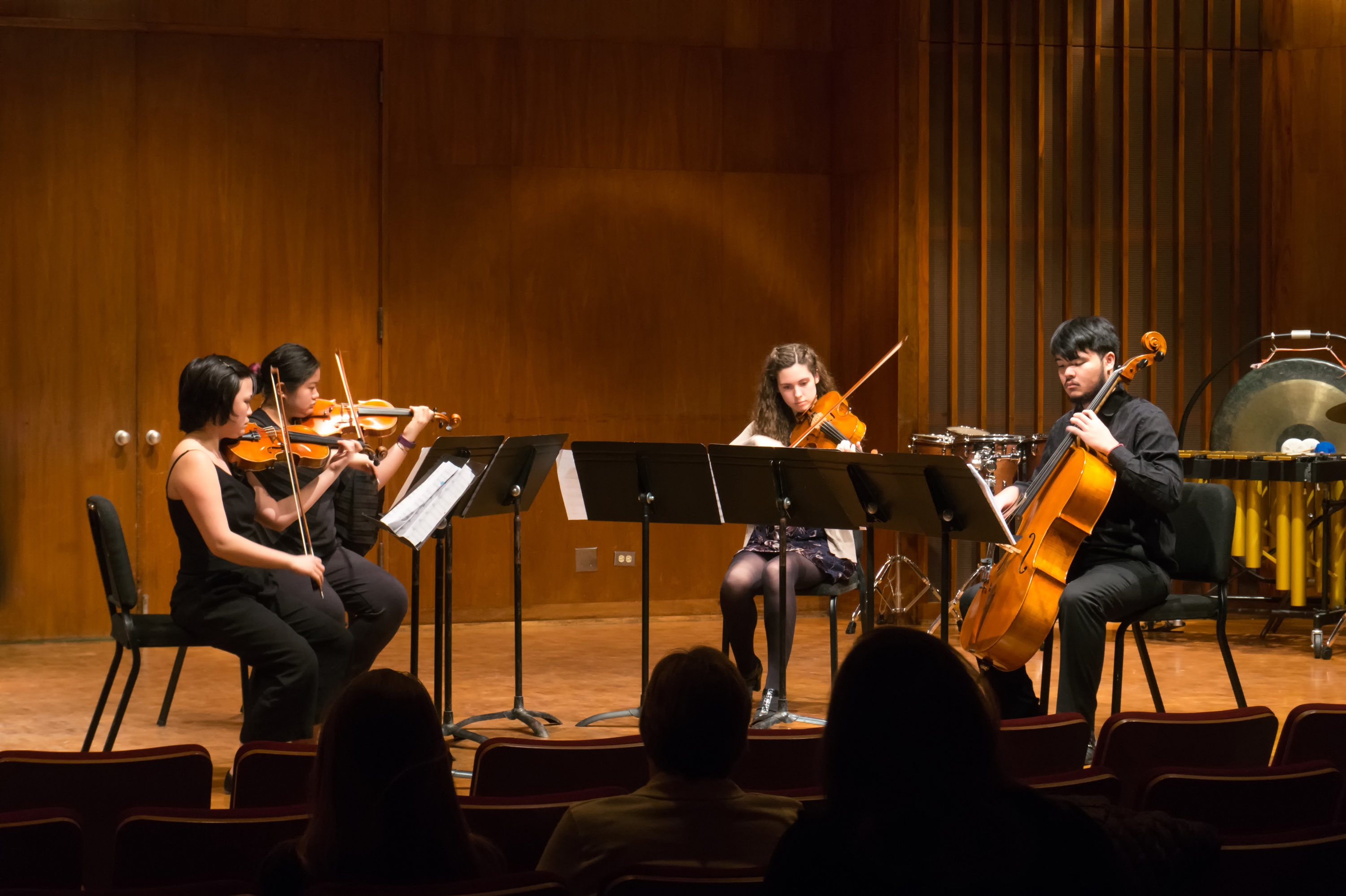 Student perform pieces composed by their peers in Harper Hall.

On Sunday, Feb. 25, students and faculty from Lawrence’s composition studio showed off six new works—four of which were premieres—at the Winter Composition Studio Recital. The composers enlisted over thirty student musicians to perform.

At Lawrence, composition majors are expected to write one piece each term under supervision of a composition faculty member. They compose music for all different kinds of instruments, voices and technologies, experimenting with different sounds and forms. After a piece is complete, they may choose to submit it to the faculty for consideration for the once-per-term Composition Studio Recital.

In this recital, there were several programmatic text settings. The first piece on program was an art song based on Arthur Gorges’ poem “Yourself the Sun” by junior David Fisher. It featured sophomore mezzo-soprano Bea McManus, who sang with a wavering sadness perfectly befitting of lines like “My thoughts in you, though yours elsewhere do rest.”

Next was a piece by Associate Professor of Music Asha Srinivasan called “The Poet’s Dream,” sung by members of the Lawrence University choirs. It is based on a poem of the same name by Percy Bysshe Shelley and is designed to emulate “some of the prominent consonant sounds and breathing sounds heard when reading the poem.” The students reportedly offered to perform the piece for the Composition Studio Recital because they so enjoyed performing it in the choir concert last week.

There were two string quartets on the program, one by Fisher and one by Freshman David Yudis. A composer and cellist, Yudis has already had two pieces performed at Lawrence. This piece, called “Unpredictability,” tells the story of a character struggling with isolation. Over five movements, each instrument musically portrays different aspects of the character’s battle for acceptance. In Fisher’s piece, “Petrified, Splintered,” each instrument carries a fragmented melody at a different speed; several times, they synced up for a special moment.

Senior singer Kiera Jett commissioned “A Mother’s Love,” by Lecturer of Music Evan Williams, as a part of her Senior Experience. Williams’ piece for mixed quintet is a four-movement setting of poems by African American writers which describe the horrific effects of slavery on families. Jett sang the emotionally gripping poems over different accompaniment patterns and gestures that reflected the pacing of the text.

The most striking composition was “Ripples in Infinity” by senior Daniel Whitworth. Written for a mixed ensemble of flute, clarinet, violin, cello, piano and percussion, it moves between an impressive variety of scenes and moods. A conductor kept the ensemble moving together through difficult changes of harmony and meter. Whitworth found interesting combinations of sounds by pairing instruments according to their sonic characteristics—sometimes in unison, sometimes in contrast.

The enthusiasm of other students is vital to the development of these composers, who are all at different points in their musical careers. The hardworking performers and eager audience members on Sunday helped them realize their musical visions. Coming to studio recitals is a great way to show interest and support new music, so make sure to come to the next one in the spring.

Student perform pieces composed by their peers in Harper Hall. Photo by Taylor Blackson On Sunday, Feb. 25, students and faculty from Lawrence’s composition studio showed off six new works—four of which were premieres—at the Winter Composition Studio Recital. The composers enlisted over thirty student musicians to perform. At Lawrence, composition majors are expected to…