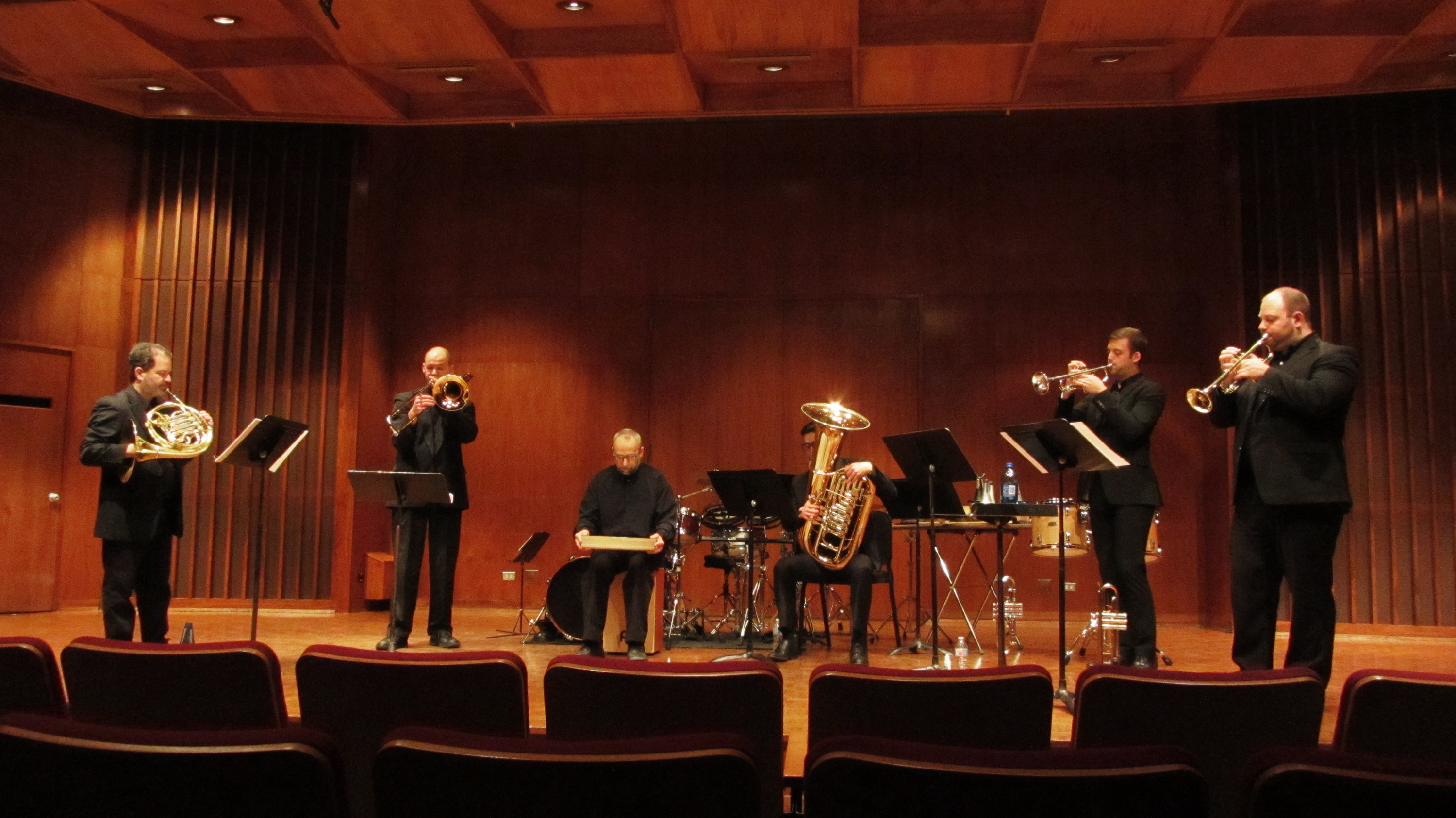 In my time at Lawrence as a trumpet major, I’ve seen a plethora of brass concerts. Some of these were by guests and others by our esteemed faculty, in addition to student recitals which are put on throughout the year. The most common style of brass group that I’ve heard play is the quintet. I’ve heard many quintets in my time at Lawrence, and the Wisconsin Brass Quintet would be at the top of my list as the most unique. In reality, this quintet is actually a sextet, as they are now performing shows with a percussionist, Anthony DiSanza. The Wisconsin Brass are also one of the chamber groups in residence at the University of Wisconsin-Madison.

To open the show, DiSanza sat on top of a cajón with a drum in his hand, performing a captivating drum solo as a start to the concert. The members of the group then walked onstage and were introduced by trombonist Mark Hetzler. They opened with a piece entitled “Allegretto Pizzicato” by Béla Bartók. With the added percussion, this piece was swift and light, bolstered by the technique of the musicians onstage. After a quick introduction, the group jumped right into “Meditango” by Astor Piazolla. This piece particularly featured DiSanza, but I also noticed the technique of the trumpet players, Alex Noppe and Matthew Onstad. Piazolla’s new tango style worked well with the quintet sound, though in the past I hadn’t heard solely brass play the works of Piazolla.

The next piece was composed by a friend to the band, Robert Maggio. I found this piece interesting because it tried to apply Morricone type textures to a quintet. DiSanza, playing a drum set, particularly stood out on this one; this made the range of sound feel like a mini big band. The five movements of this piece made it a little long, and in particular the middle movements had a slow tempo. French horn player Daniel Grabois, when introducing the piece, told us how it was inspired by an interview with the director of a famous Western. After this piece finished, there was a quick intermission and then a piece composed by Grabois entitled “Migration.” This piece was played well; however, it was at this point that I noticed the band’s style remained the same for most of the concert: loud brass hits bolstered by percussion, high trumpet and quick blasts of trombone.

After “Migration,” the group introduced a piece composed by prisoner of war Olivier Messiaen. Originally a quartet composition, it was arranged for the group by Hetzler. This piece, from “Quartet from the End of Time,” was filled with loud fanfares and apocalyptic overtones; it contained heavy brass unisons throughout. It was cool and somewhat exciting, except for the fact that it was in the same style as before. The rest of the program was not as memorable, though just as well-executed. Another Piazzolla tango was a nice addition and the group played pieces by both Chick Corea and Charles Mingus to close the concert. The biggest problem I had was the lack of a variety. With a few exceptions, it was mostly heavy brass music, which is good, but not great. However, the quintet is a young group and I predict that they will make big strides in the world of modern quintet.

Quintet pictured on stage. Photo by Nidi Garcia In my time at Lawrence as a trumpet major, I’ve seen a plethora of brass concerts. Some of these were by guests and others by our esteemed faculty, in addition to student recitals which are put on throughout the year. The most common style of brass group…