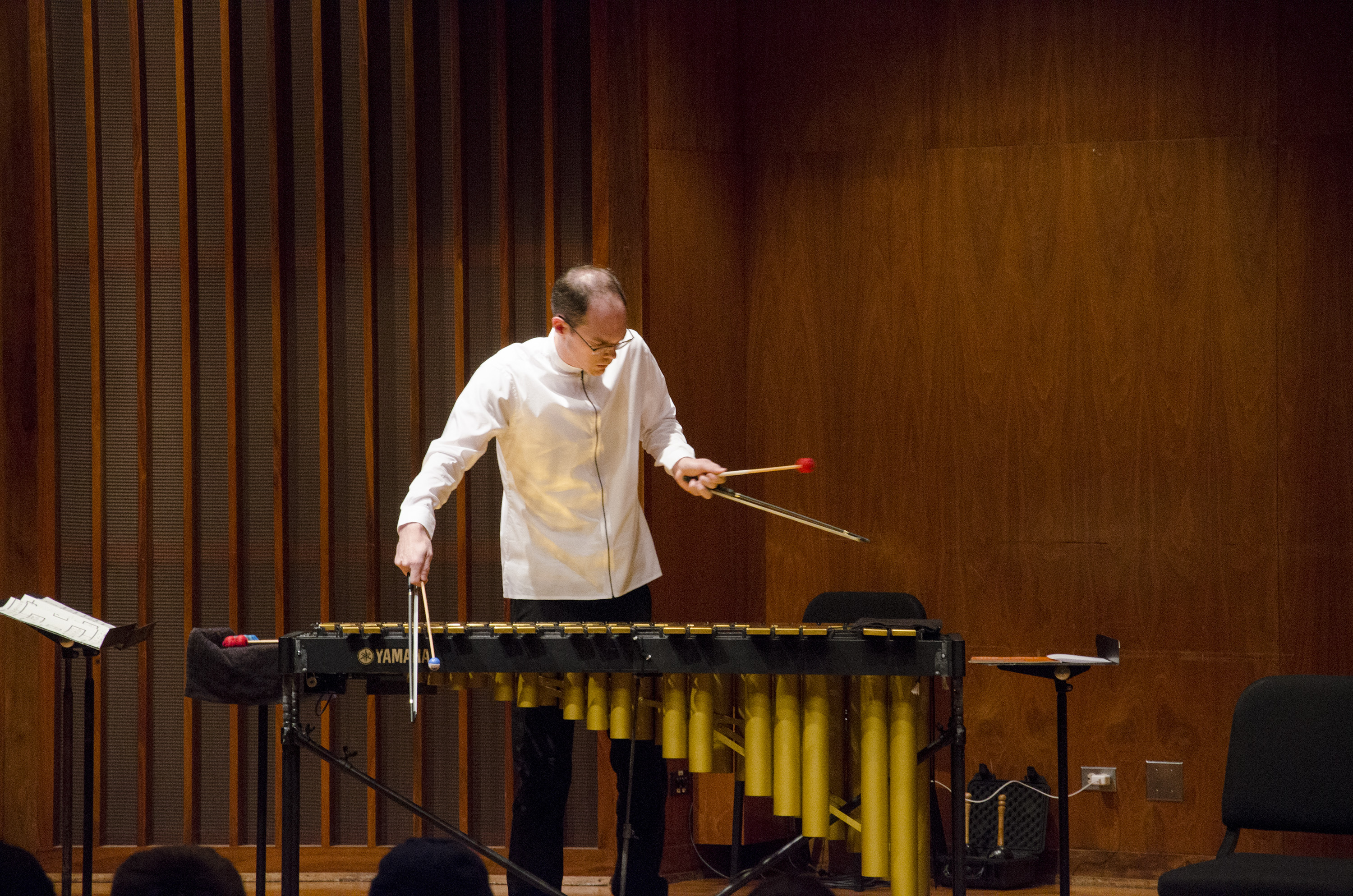 Percussionist Mike Truesdell ’07 made a return to his alma mater this past Friday with a performance that was succinctly and sensitively programmed, while also displaying his broad ranges of technique, approach and artistry. While most of the audience was made up of current percussion students—and there were certainly moments of idiosyncrasy that appealed to percussionists more—Truesdell played music that went beyond typical wow-factors and virtuosity rooted in the instruments. There was a depth to how he recreated the pieces and this was reflected in his programming as well.

The concert opened with Ben Wahlund’s “Hard-Boiled Capitalism and the Day Mr. Friedman Noticed Google is a Verb.” It was the youngest piece on the program which was, overall, a very young program due to the nature of solo percussion compositions, but refreshing nonetheless. “Hard-Boiled” was the concert opener which began with a loud intensity before dropping down to a barely audible vibraphone surrounded by currents of silence that flowed with a similar intensity despite their dynamics. It was an ample opener, already showing off the restraint so prevalent in both the writing and in Truesdell’s playing.

Cool, fluttering figures on the marimba trickled into the next part of the performance, a lengthier section composed of the first two movements from Jacob Druckman’s “Reflections on the Nature of Water,” bookending “Mourning Dove Sonnet,” a popular piece in the repertoire of many vibraphonists by Christopher Deane. Together, the pieces created a beautiful world of water and doves, interacting through time. While high marimba tones simulated different water sounds, bowed and bent vibes replicated the call of a dove. Making musical gestures from nature sounds—especially water and birds—can be overdone and cliché. However, in the context of these pieces, built not around these sounds but with them, they avoided these connotations, instead offering a fresh look at how the composer heard them and was able to interpret them into something else. Truesdell approached these sounds with that same reverence, but he also approached them clinically, carefully moving the mallets and bows with calculated freeness. Having previously heard Deane’s work at a student recital, I was looking forward to hearing it again, and in this new backdrop of the concert and the pieces surrounding it, “Mourning Dove Sonnet” gained more meaning and a playfulness that drew me into a different space.

Just these two pieces and two movements would have been enough to make this concert a memorable one, but then he performed “Aphasia,” obliterating most other expectations and preconceived notions. A theatrical piece that is solely musique concrète with a type of invented sign language that corresponds to the specific sounds, the work by Mark Applebaum challenges the role of the musician in music-making while also, undoubtedly, instilling awe in those who have the privilege to experience a live performance of it. Truesdell performed the piece flawlessly, and with this piece in particular, performed with unnoticeable mistakes or none at all, it throws the audience into the unpredictable world it creates. Because of how synced the movements are with the sounds, the slightest flub could take one out of that world, as the musician’s actions have great effect on the music that is produced. What was coming out of the speakers was fixed, but Truesdell was nowhere near that, a malleable point that produced musical movements through conviction, talent and what I can assume was hours upon hours of untraditional practicing.

Other pieces on the program were an electronic piece with live maracas, another work by Applebaum that followed “Aphasia” but was immensely different and a short excerpt from a lute suite by Bach arranged for marimba that closed the concert. Each built off of Truesdell’s apparent fascinations that he dealt with in the rest of the performance: stage presence, pockets of silence in conversation with music, the predictable versus the unpredictable and programming as an art. Ending the concert with Bach was a strange move, and even seeing it on the printed program did not wipe away my immediate surprise hearing it. Nevertheless, with the other intentional programming decisions—splitting up two movements and putting in a piece to stitch together a lengthier work, having two contrasting works by the same composer, etc.—the Bach was a bow at the end, a tongue-in-cheek choice, but a pleasant one too. The entire performance took many turns, guiding the audience through highlights from the short yet rich tradition of solo percussion. I—along with the other non-percussionists probably—appreciated that, but beyond the educative aspect it was a deeply inspiring look at what can be done with the nuances in music, movement and programming.