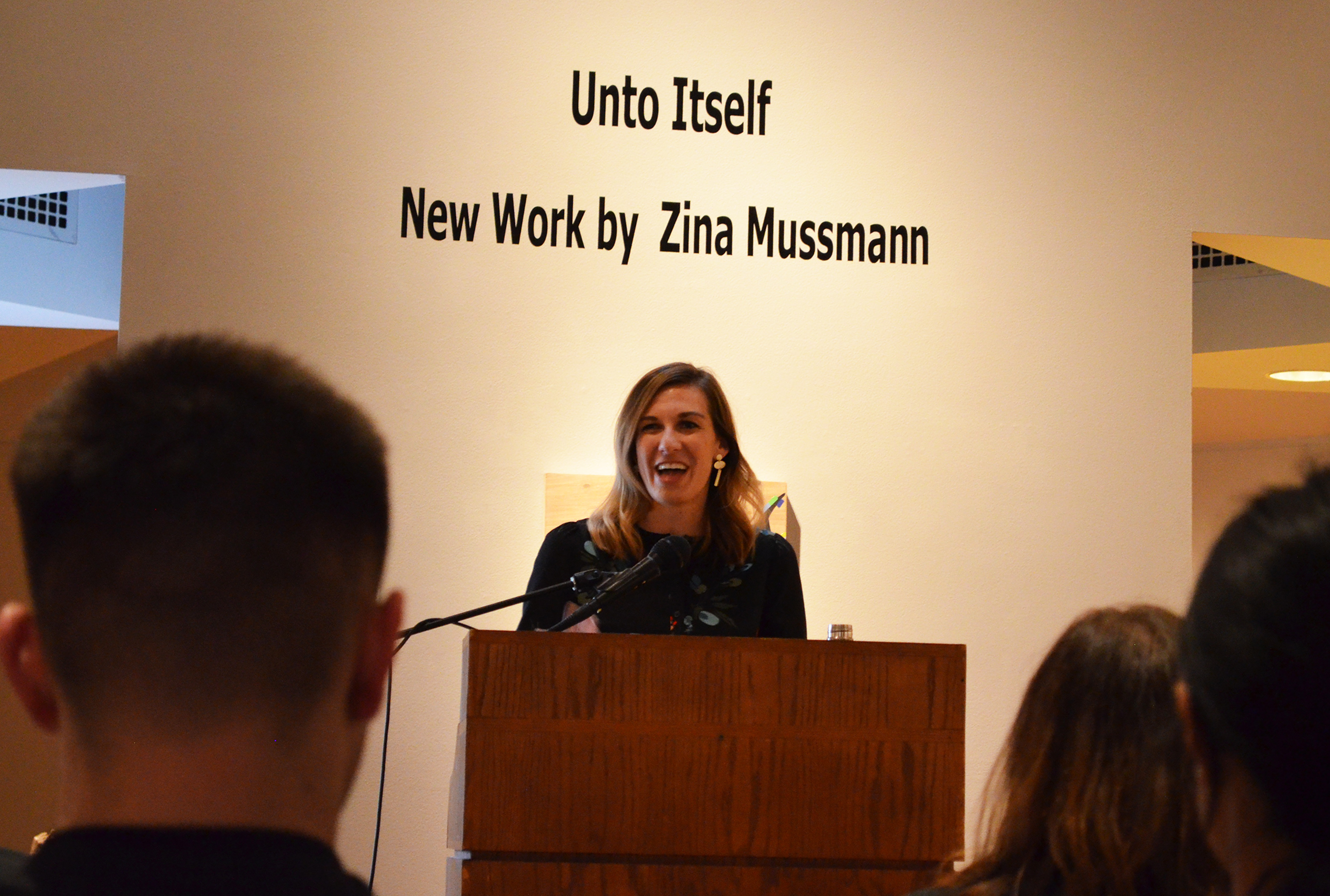 On Monday, April 30, Lawrence welcomed poet Anne Barngrover for a reading from her most recent collection of poetry, entitled “Brazen Creature.” The event, which was sponsored by the Mia Paul Poetry Fund, took place in the Wriston Art Gallery. The art hanging on the walls provided the perfect backdrop for Barngrover’s presentation as she read in front of a sizeable audience.

Barngrover began the reading with a personal anecdote from her time studying abroad in Bath, England. She lived in an old house with seven other girls while studying abroad and during that time all of the other girls began to report unexplainable sounds and sightings of an apparition. Anne was frustrated that the specter never appeared to her and this disappointment at the lack of supernatural surprise in her life formed the basis for her poem.

She explained that much of her poetry is inspired by her own reflections on memories and past experiences. This became even more apparent as she continued to read; many poems seemed like evocations of Barngrover’s own internal monologue, skillfully capturing the trepidation and ambiguity that many of us feel as we reflect upon our experiences and try to make sense of them.

Another poem was a sort of ironic serenade to the brown recluse spiders that Barngrover has frequently lived amongst. She pondered how to appreciate the tiny creatures in spite of their deadly, poisonous bite and related this to the larger question of how we cope with danger and uncertainty in our own lives. Like all of the poems she read, it was full of clever metaphors, poignant rhetorical questions and a certain effortless eloquence that is characteristic of all those who have practiced their craft for many years.

Her last poem was composed entirely of questions. It dealt with a vow that she had previously made to her future self, and it reflected on the value of making and keeping promises, whether to herself or others. I felt that it was a fitting conclusion that cohered with many of the other themes of the poems – namely those of memories, self-reflection, hauntings, personal transitions and relationships. I was left with the impression that I knew Anne on a personal level by the end of the reading, simply due to how personally expressive her poems are.

Barngrover concluded the event with a question-and-answer session and a book signing. She was asked about her creative process, her methods for dealing with a lack of inspiration and how her experiences teaching have affected her as a poet. She responded thoughtfully before thanking all those in attendance. Since I had not been to a literary reading in a long time, this event was refreshing, and I thoroughly enjoyed the artistry and poetry of Anne Barngrover.

Anne Barngrover gives poetry reading in Wriston. Photo by Julia Balestri. On Monday, April 30, Lawrence welcomed poet Anne Barngrover for a reading from her most recent collection of poetry, entitled “Brazen Creature.” The event, which was sponsored by the Mia Paul Poetry Fund, took place in the Wriston Art Gallery. The art hanging on…