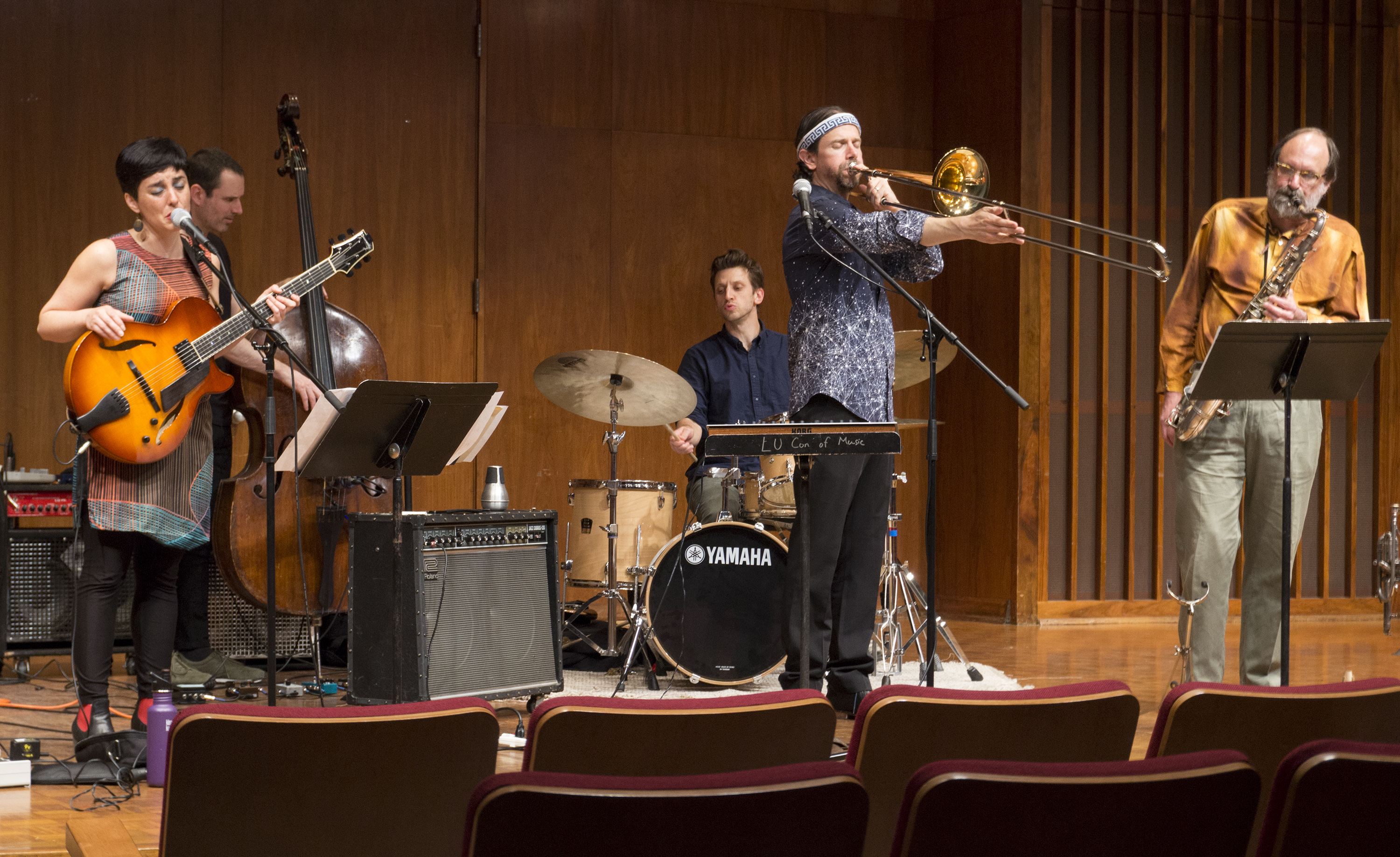 My freshman year, as a music student, I learned a very important thing about going to concerts: you always want to attend the jazz faculty concerts. Lawrence’s jazz faculty concerts are always something to look forward to. Last Wednesday, I had the pleasure of attending the latest concert, featuring guest trumpeter Rex Richardson. Richardson is currently the trumpet professor at Virginia Commonwealth University, though he plays as a guest artist with orchestras and big bands all around the world. His list of collaborations is also extensive: legends such as Ray Charles, Aretha Franklin, Chris Potter, Arturo Sandoval, as well as touring in Joe Henderson’s quintet. Just from reading the biography, I had high expectations for this concert.

The concert started off with a tune written by current Associate Professor of Music John Daniel, entitled “Knock on Woody.” The piece was written as a tribute to one of Richardson and Daniel’s heroes, the great trumpeter Woody Shaw. The piece featured Daniel on flugelhorn, Richardson on trumpet and a solo by Steve Peplin, who teaches jazz guitar at Lawrence. After the fast opener, the concert continued with an original composition by Richardson, a ballad entitled “Lefty in the Clover.” Dedicated to his wife’s ferret and a famous trumpeter who passed away on the same day, the piece captured those mournful feelings. Completely uncommon in the jazz world, Richardson soloed on the piccolo trumpet in one of the following songs.

Another piece was a Thelonious Monk tune, “Monk’s Dream.” This piece was possibly my favorite because it really featured the jazz faculty. The head of the song was played by the horns while Lecturer of Music Bill Carrothers played wild piano lines behind the melody. Peplin played an extremely rhythmic solo, starting off simple and then working in more and more complex lines. At this point in the concert, the lineup shifted again to play a Woody Shaw composition called “Beyond All Limits,” already indicating another fast and virtuosic tune. The melody was played in unison by several of the musicians. Most impressively, unison sounded extremely tight together, once again indicating the performers’ skill. After “Beyond All Limits,” Richardson announced the last piece, another John Daniel composition, “While the Cat’s Away,” written as his tribute to Thelonious Monk. The entire faculty came up for this one, and each of them took a solo. The tune was a fun and funky romp that was a solid way to close the concert.

Overall, I thought this was another solid performance by our outstanding jazz faculty. This concert was different from typical performances, as the personnel shifted more than any jazz concert I’ve seen at Lawrence. The performers shifted on and off the stage so that every single piece had a slightly different lineup. The other difference, which is common with guest artists, was the focus on playing technically challenging solos. Richardson’s solos for each contrasting type of tune sounded the same. For instance, his flugelhorn sound was quite similar on both of the ballads, and his piccolo and Bb trumpet solos had a focus on playing high and fast. Don’t get me wrong, it was still a great concert. The jazz faculty concerts are always well worth going to see.