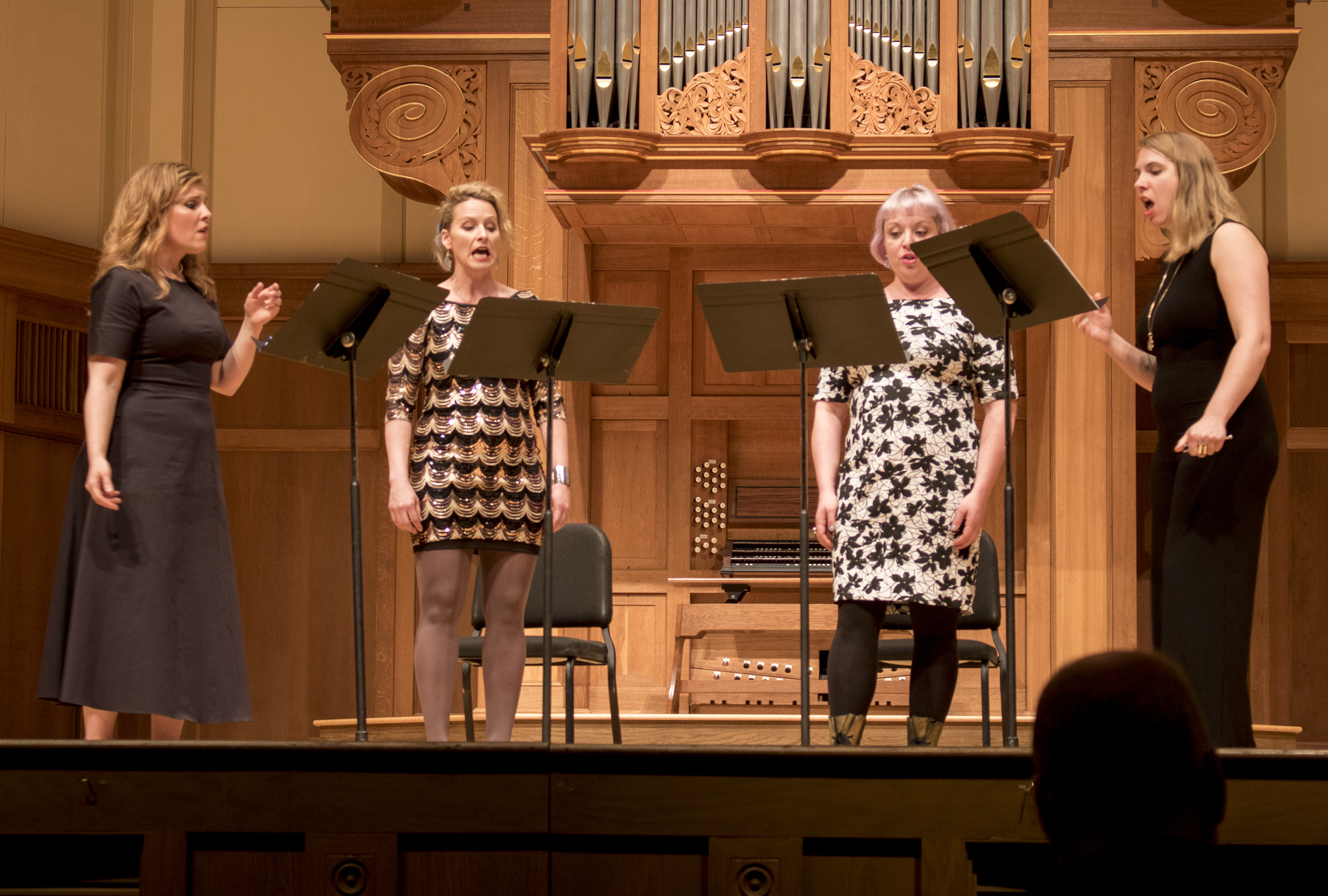 On the stage of Memorial Chapel, the concert began as Pearse and DeBoer Bartlett entered quietly through the side doors. They began to sing from opposite sides of the stage. Each woman’s voice seemed to echo and complement the other to create an interesting counterpoint. Their voices gradually became louder and more forceful as they both stepped slowly toward the front of the stage. The two contrasting lines began to blend as the piece reached its climax.

After the remaining group members joined them on stage, Quince greeted the audience, explaining that Gilda Lyons, the composer of the first piece, was inspired by watching women in Nicaragua repair fishing nets on the beach using needles made from fish bone. This vision of mending and weaving together led to a musical composition that attempted to evoke the same image with two human voices. Each other piece came with a similarly unique backstory, which helped me engage more fully with the music.

Their next selection entitled “The Four Winds,” explored the tendency to organize our internal and external world into quaternities, such as North, South, East and West. I enjoyed an unexpected harmonica interlude as well as the companion illustrations that were included in the program notes. Another piece, “Three Erasures,” featured lyrics from a series of erasure poetry created by erasing large sections of articles from “Teen Vogue” magazine. According to the composer, Cara Haxo, the poetry “depicts a woman’s struggle with body image within a society that places too much emphasis on physical appearance.”

Each member of the Quince ensemble is a classically trained vocalist; they all have advanced musical degrees. This was very evident in their performance – Quince was almost perfectly in tune and in time. Although I’m no judge of singing ability, I thought they sounded beautiful. Most of their selections were experimental, eschewing the traditional rules that most vocal music follows. Only their final piece resembled a traditional song. It was entitled “Prisoner of Conscience,” and it gave a similar impression to a spiritual hymn. The text centered on the theme of the responsibility to oppose tyranny and oppression, and the program notes hinted at a relevance to some recent political events.

“Prisoner of Conscience” was moving and soulful and was a fitting conclusion to a concert that ventured into the horizon of possibilities for vocal ensemble music, often making subtle remarks about society along the way. Quince received a standing ovation, a sure indication that the rest of the audience also appreciated the outstanding singing of each member as well as the fascinating and meaningful new music that they shared.