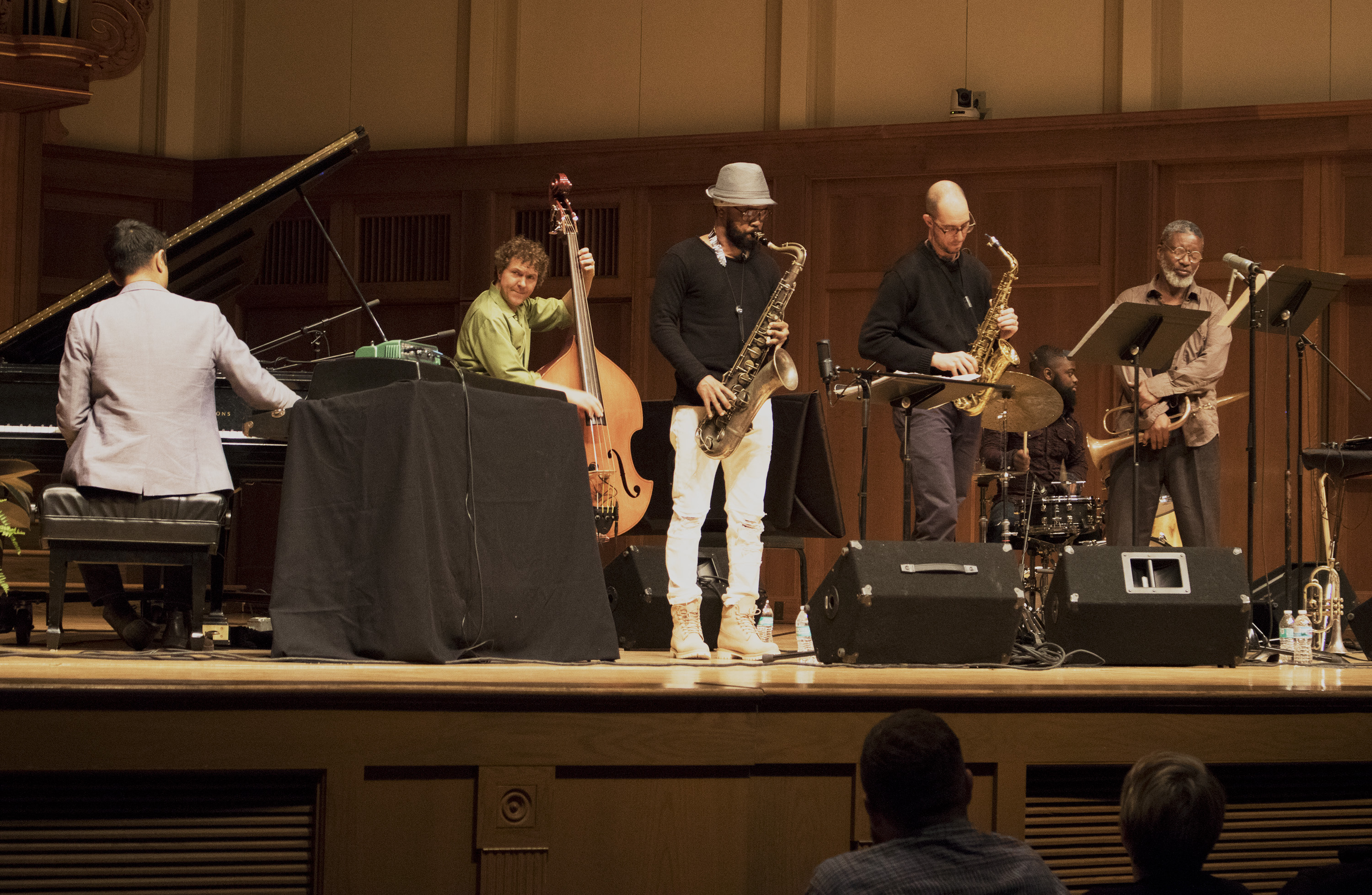 Vijay Iyer Sextet pictured on stage in the Chapel.
Picture by Nidi Garcia.

Sometimes concerts fail to live up to the hype, even when the hype is appropriately built by many great records and even a previously seen live show. That was my experience seeing Vijay Iyer and his sextet perform in Lawrence Memorial Chapel this past Friday.

Before you read on, I urge you to read this review I wrote of a past Iyer performance that I loved: downbeat.com/news/detail/iyer-sorey-crump-rekindle-bonds-at-chicagos-constellation. This trio show was enjoyable and intense, and I was looking forward to seeing how the pianist and composer fit into a larger ensemble under his direction. Unfortunately, the sextet concert fell short for me; it was an overbearing collage with little listening and little space. That said, I am listening to the group’s album, “Far From Over,” while I write this. This album has the same personnel, except for the exchange of drummer Marcus Gilmore, who played live, for Tyshawn Sorey, who is on the record. In the studio, I hear much more nuanced playing and listening from the group, further prompting me to dig into why the concert frustrated me.

Too often, expectations can play into how one hears something, and in the case of Iyer, I had already heard a lot – several albums and the aforementioned trio show. All these molded my thoughts stepping into the Chapel. Even when the expectations were not in the forefront of mind, they lurked in the subconscious and influenced my thoughts. I expected the performance would be closer to the standards of what I had already heard.

What really left me perturbed though, was the lack of listening and space that permeated nearly the whole performance. There were countless, long stretches of time where all six musicians played at once, creating a dense, muddy barrage that even invoked anxiety at points. There are certainly times when everyone playing can be extremely effective, and Iyer, bassist Stephan Crump and Sorey did exactly that before, but this recent performance was overbearing. There is plenty of space on the record, but live, each musician played constantly, stepping on each other’s toes and talking over each other in an unmusical manner. There is a way to collectively improvise and overlap ideas in a powerful, positive way, but the sextet did not do so at Lawrence. This was surprising, having heard some of these players do that in multiple settings before.

Many audience members will be quick to blame these problems and the sound on the Chapel’s acoustics. There is no avoiding the too-reverberant and overwhelming effect for ensembles that aren’t orchestras or choirs, but the challenge of playing to an extremely acoustical space should not be one that is taken lightly or worse, ignored. The group had sound-checked, and they could have adapted their playing to better fit the Chapel. If anything, the resonance the hall provides should have prompted more moments of listening to ideas. Iyer – and assumingly the sextet as well – have performed in many different spaces; part of hearing an improvisatory group live is experiencing how they create their music in that moment and location. One can easily hear how they sound in the studio, but live performance is where different personalities come out. Oftentimes, those personalities must be even more sensitive in listening. I wish I could have experienced the more focused conversations that I heard on “Far From Over” and in past performances translated to their Lawrence concert, but I did not.

All this said and done, it is possible this concert was a fluke – an outlier of a concert on their tour of this music. I am no stranger to having external and internal forces be detrimental to my performances, and the chance of that happening never goes away, even for some of the best artists. I want to be empathetic to this sextet, because I have heard what they are capable of. The point of this review is not to bash them – I can only hope it serves as a document that this group and other artists can look at and learn from.