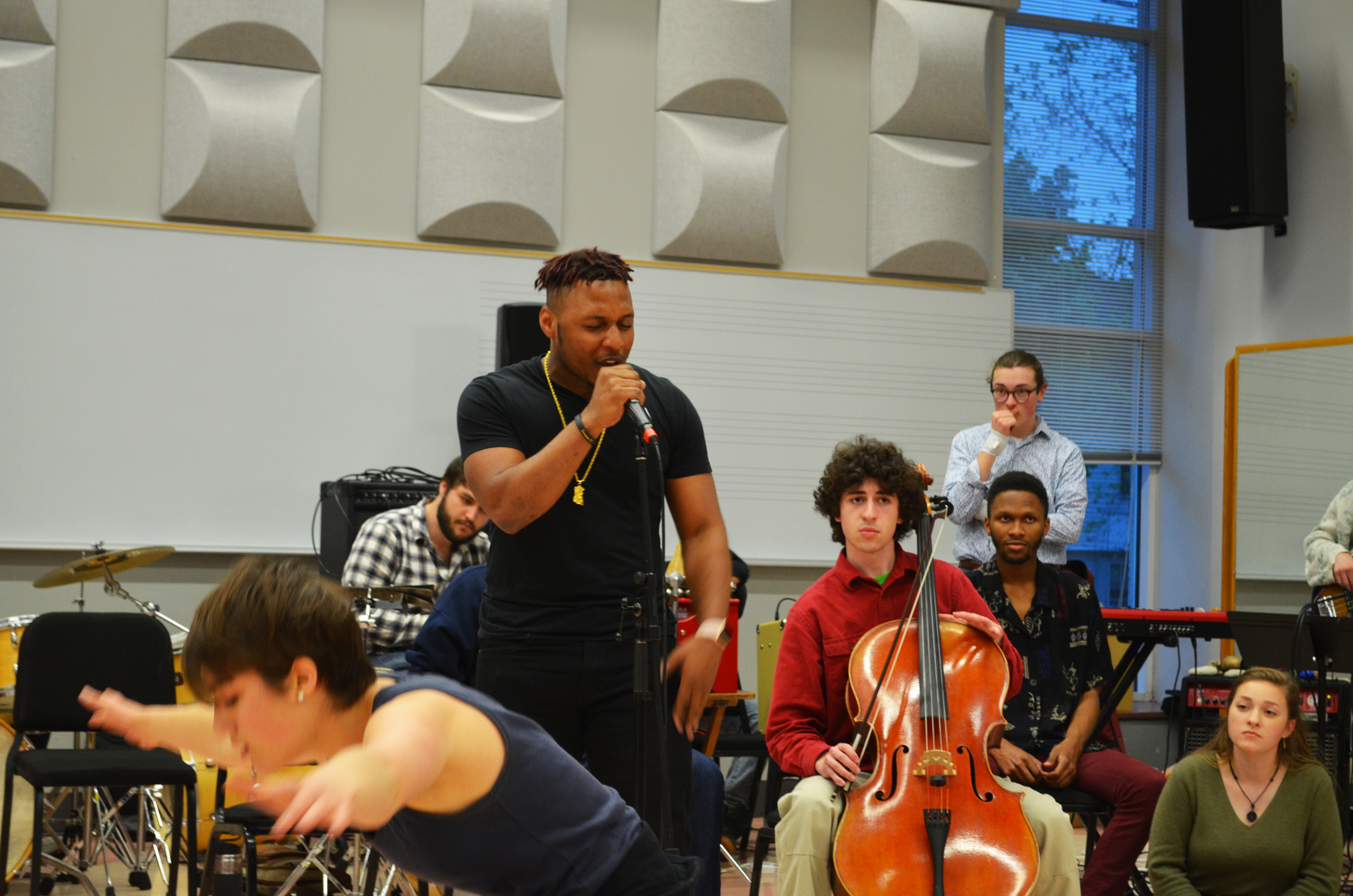 IGLU and Sol Studios collaborate during an end of the year performance.
Photo by Julia Balestri.

On Monday, May 21, the Improvisation Group of Lawrence University (IGLU) had their final performance of the year. The group collaborated with SOL Studios, performing improvised hip-hop and dance. Before the show began, IGLU Director and Instructor of Music Matt Turner got up to say that he had always wanted to do a hip-hop show with IGLU. 2004 was the last time IGLU had a rapper in the group, but upon hearing sophomore Daniel Green and other members of SOL Studios, he planned a term project focused on hip-hop improvisation.

The performers were itching with excitement before the show began – lightly humming, playing with instruments or tapping their feet. The prelude started with junior Joe Dennis and sophomore Wasonu Allen at the microphone and freshman Isabella Andries on piano. Two dancers took the stage, slowly moving with the mellow piano in the background. Dennis continued to hum, while Allen told the audience, “If you close your eyes, you can see your dreams right in front of you.” Dennis suddenly began to beatbox, changing the performance’s tempo entirely.

After the prelude’s end, the ranging talent of IGLU and SOL studios was exhibited through varying string, wind and percussion instruments taking control, along with rap vocals that all worked cohesively together. One section that stood out to me was when junior Jacques Fehr began to rap. The seriousness in his voice relayed a message, even in the brief and simple lyric, “Why lie?” Green rapped along with Fehr, saying, “Love and no hate,” into a telephone filtering his voice. There was a brief moment of awkwardness when Fehr asked, “Does someone want to put a beat on?” while the music was fading, but afterwards, the show became more upbeat.

This intensified yet smooth speed, accompanied with senior Bernard Lilly and Green’s change in roles of vocals, piano or percussion, led to the performance’s climax. Junior Alex Quinn got up to the microphone and began to perform a poem . Quinn grabbed the audience’s attention with a fiery piece about sexual assault on campus, consent and how women are afraid of being killed by men for rejecting them – relating to the newfound motive for the Santa Fe high school shooting. At the poem’s tense end, all was quiet, and Quinn stated, “I don’t know how else to make you listen.” I was left with chills as the music began to gradually build up.

The performance came to a close with every vocalist in IGLU and SOL Studios repeatedly singing, “Please come and find your voice,” which I found to be a nice correlation to Quinn’s preceding piece . Eventually, the majority of the audience got up to dance with IGLU in excitement. Everyone was happy in this moment, and it was gratifying to witness a scene of such harmony within the music scene at Lawrence.

IGLU and Sol Studios collaborate during an end of the year performance. Photo by Julia Balestri. On Monday, May 21, the Improvisation Group of Lawrence University (IGLU) had their final performance of the year. The group collaborated with SOL Studios, performing improvised hip-hop and dance. Before the show began, IGLU Director and Instructor of Music…