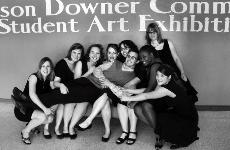 Jason Downer Commons opened its doors to students for the first time in nearly a year last Thursday, only this time the focus inside was art, not food. April 28 marked the grand opening of the Jason Downer Commons Student Art Exhibition.
The gallery’s opening was catered by Bon Appétit and featured music from Lawrence’s women’s a cappella group Conchordance. The gallery features artwork across varying media made exclusively by Lawrence students.
The exhibition is contained within the former Appleton and Butte des Morts rooms, more commonly known as A Room and B Room. The Appleton room features mainly sculptures and larger works, while the bulk of the paintings, drawings and sketches reside within the Butte de Morts room. GLOW’s “NOH8” campaign photos adorn the back hallway between the two rooms.
The event was the culmination of three weeks of preparation led by J.R. Vanko, a freshman studio art student. The gallery project is run entirely by student volunteers, and the costs of converting the space were covered by the Class of 1965 Grant along with support from the Alyssa Paul Maria fund. The students found faculty advisors to support the project, brought the building up to code, and collected artwork in preparation of the gallery’s opening.
According to Vanko, “The [students’] goal is to fit as much artwork in as possible through the end of the term and make Downer a space for students to use and enjoy.”
Vanko also stressed that his team made an effort to accept every piece of artwork submitted for the exhibition and noted that only a handful of pieces were not chosen for the opening.
The exhibition will host another show near the end of May, giving more students the chance to display their artwork on campus. Although the exhibition will not be a permanent fixture on campus as he had hoped, Vanko is pleased overall with the reception his idea received from the administration.
“So many people say the president isn’t here for students, isn’t approachable, but this is proof that if you have a legitimate idea, she is open to hear it,” said Vanko.
The Jason Downer Commons Student Art Exhibition is open to the public on Wednesday and Thursday evenings from 4:30 to 8:30 p.m. 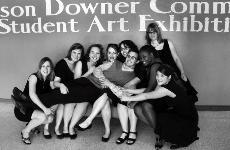