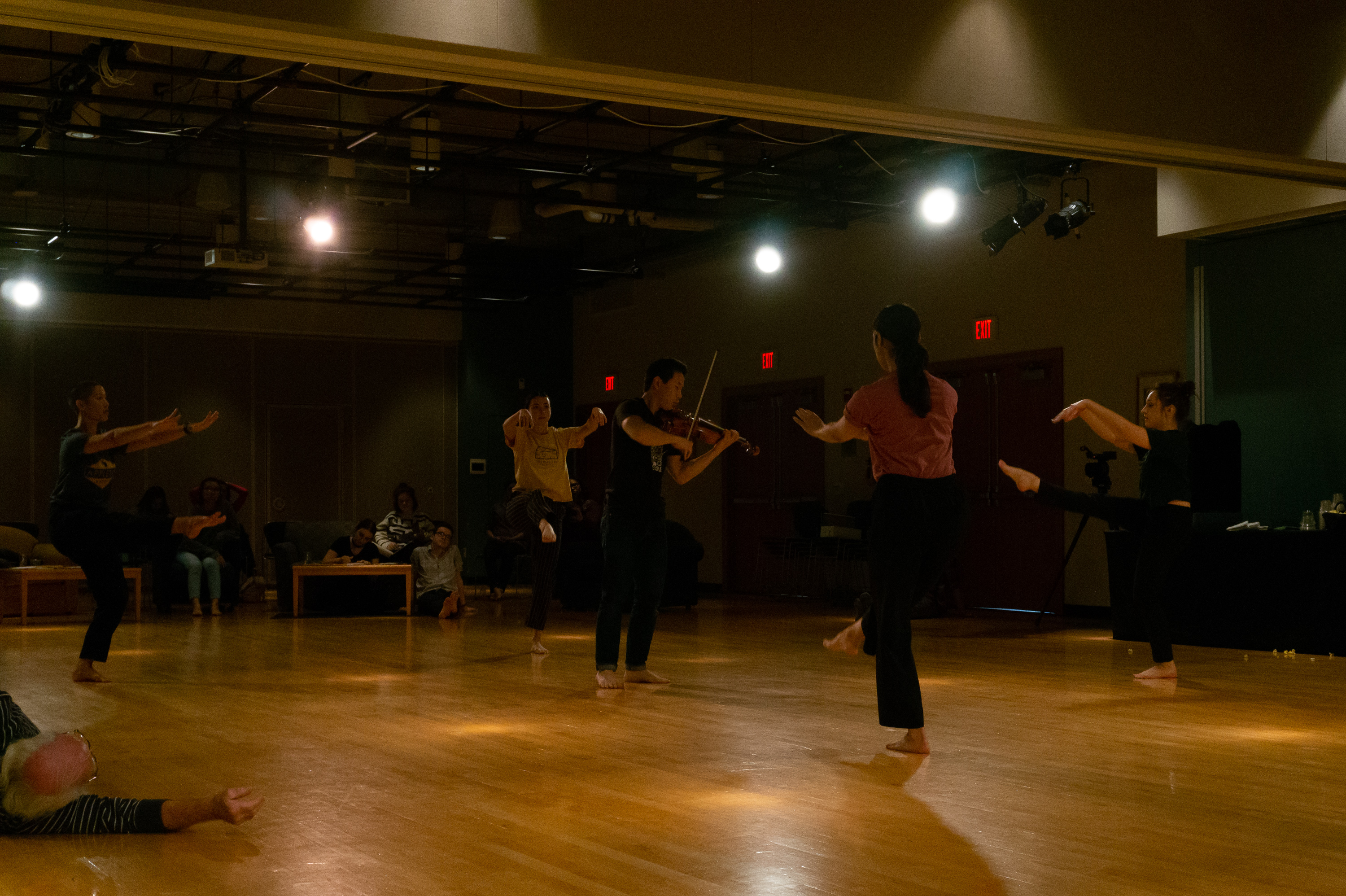 On this rainy Monday night, Esch-Studio did not appear to be set up for a dance performance. Couches and armchairs encircled the room; on the edge of the room a few instruments and microphones were strewn on a small rug.

“Homespun (please take off your shoes)” began with a violin solo, which was quickly joined by dancers. They paired off, pushed and pulled at one another, lifted and separated. The violinist began to loop the melody, and the dancers continued to meet each other and peel off until they were all still.

“My name is Indah Walsh,” said the performer in her welcome, “and this is my first time in Wisconsin, so naturally…” and she gestured to her t-shirt, which said “APPLETON” in large print. The other members of the company had similar shirts. “Does anyone speak another language, other than English?” Indah continued. She surveyed the room — a few Spanish speakers and a few Chinese speakers, among others. She asked for a volunteer to translate her welcome and chose an eight-year-old girl to translate to Spanish. “Good evening, and welcome,” she began, and passed the mic. “Buenas noches… and bienvenidos.”

The performance had three distinct parts: first a game of personal questions, which invited the audience and performers alike to share parts of their childhood and hopes for the future, asking questions like, “what did you get in the most trouble for when you were younger?” and “where do you most want to travel in the world?” Each answer was met with a confirmation by the asker — “that is correct” and applause from the rest of the group. The game was introduced by a performer named Xiao who had played violin at the beginning. He explained the rules in both English and Chinese, using his hands and environmental cues when his meaning was not entirely clear. The confusion incited by his speech made the audience pay closer attention and focus. After a few rounds, the audience began to find the rhythm of the game, and after a few more rounds two of the dancers began to take over. They volunteered and answered more and more quickly until their questions, answers and affirmations began to run into each other. The dancers circled each other and ran into one another until they were interrupted by another performer named Erica, ready to lead the next piece.

Erica introduced herself and explained that she spoke “English and Spanglish.” She, again in two languages, began to lead a warm up, that looked a lot like a Zumba exercise. “Uno dos tres quatro, cinco six seve- I’m sorry I can’t count that high!” She laughed.

The final piece of the performance was a composition by Indah’s brother Isaac. Indah explained that during his senior thesis performance, she was inspired to create a performance space where the audience could interact however they chose. She encouraged those assembled to allow what we saw and heard to influence our decisions. As Isaac began his performance, the audience took various positions around the room — spreading out on chairs, lying flat on their backs, drawing at the provided tables, stretching, watching, playing, following each other, eating popcorn, walking around, documenting and watching…

Xiao again took his place on violin and began to play a callback to the introduction. The dancers joined him one by one until they were all spinning around each other and interacting. As they did this, the audience quietly began to make their way back to their seats… all but one- a little boy who was about three years old. He watched the dancers, fascinated, and did his best to imitate their movements- spinning, falling, arms outstretched and finally, applauding with the rest of us.