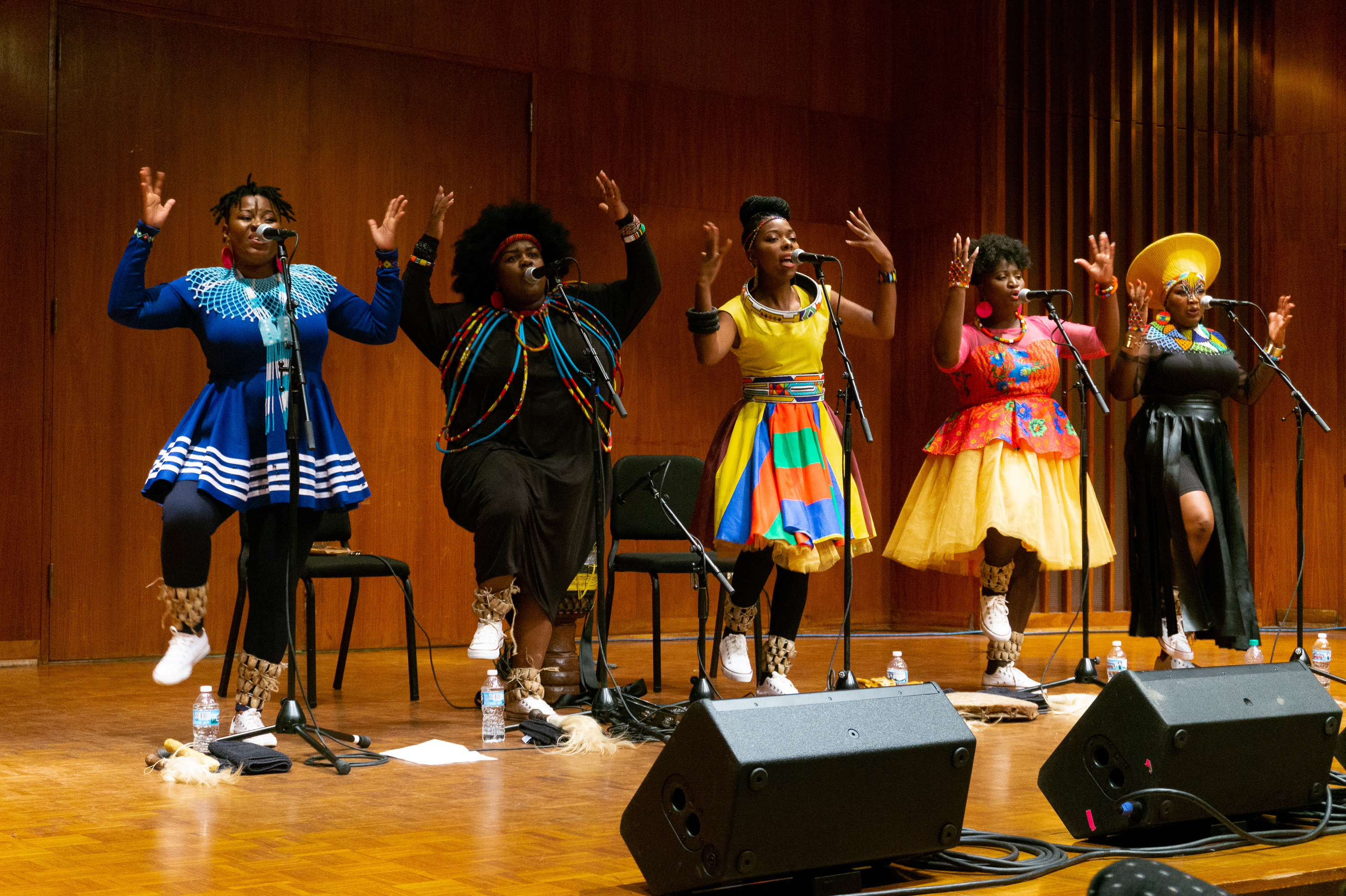 Harper Hall was packed with fans, community members and first year music majors on Monday night; they were all excited to see Nobuntu, an Mbube group from Zimbabwe. Mbube is a genre of music sung a cappella, known for its harmonies in rhythmic unison. Traditionally, it is a male-dominated genre. Not only was Nobuntu the first all-female group in Zimbabwe, they were the first in the world. As the lights dimmed, five women took their places on the stage to much applause. They were brightly dressed in yellows, pinks, blues and greens. They wore either full skirts or straight dresses as well as large earrings, white sneakers and shakers on their ankles.

The group began with two songs in Ndebele, one about asking for courage from the Almighty, and the other a song of praise. Both pieces involved one of the group members playing a drum and dancing at her mic. The performers used dance as another medium with which to convey their message. Though it is likely that only a few audience members spoke Ndebele, the group’s meaning could not be clearer as they stomped, pointed and raised their arms in celebration.

“Good evening,” welcomed Heather Dube, and the audience returned her welcome. She paused and made a face — “C’mon!” she exclaimed. “You can do better!” This playful energy ran throughout their interactions with the audience the entire night — they made us feel at ease and as if we were all friends. They introduced themselves, told us about their 16 hour flight to the states, explained that they were on the second state of a 16 state tour and “still fresh.” “Tomorrow we are changing time zones,” said mbira player Zanele Manhenga, “and this never happens in Zimbabwe — it feels like time travel to us.”

Their songs ranged in meaning and depth. Dube introduced a song called “Cry Song” by talking about the pervasiveness of abuse where they’re from. “Back home, one in 10 women experience abuse…back home, if a marriage isn’t nice, if a man isn’t nice, mothers will say ‘he will change, one day.’” She said that “Cry Song” is the conversation between a mother and daughter where the mother does not “tolerate this nonsense” and tells her daughter to come home. She encouraged the audience to be an ear for anyone who needs help. They performed an “Mbube-ized” version of Amazing Grace. On their most recent album (“our new baby,” as Manhenga called it) they hoped to pay homage to the genre and emphasize their roots. They covered a song called “The Black President” by Brenda Fassie about Nelson Mandela and the lessons of peace and forgiveness that can be learned from him. They lead the audience through a call and response song in Ndebele and closed the night with a warrior dance song called Impi, where each member of the group performed a dance solo. Throughout the night, each performance added to the picture of their identity as a group: proud to be the first female group, thrilled to be on tour, glad to talk about their roots and where they are from and so incredibly in love with music.

The Lawrentian would like to thank the audience member who gave her ticket to this reporter when she forgot to pick one up. Much appreciated!