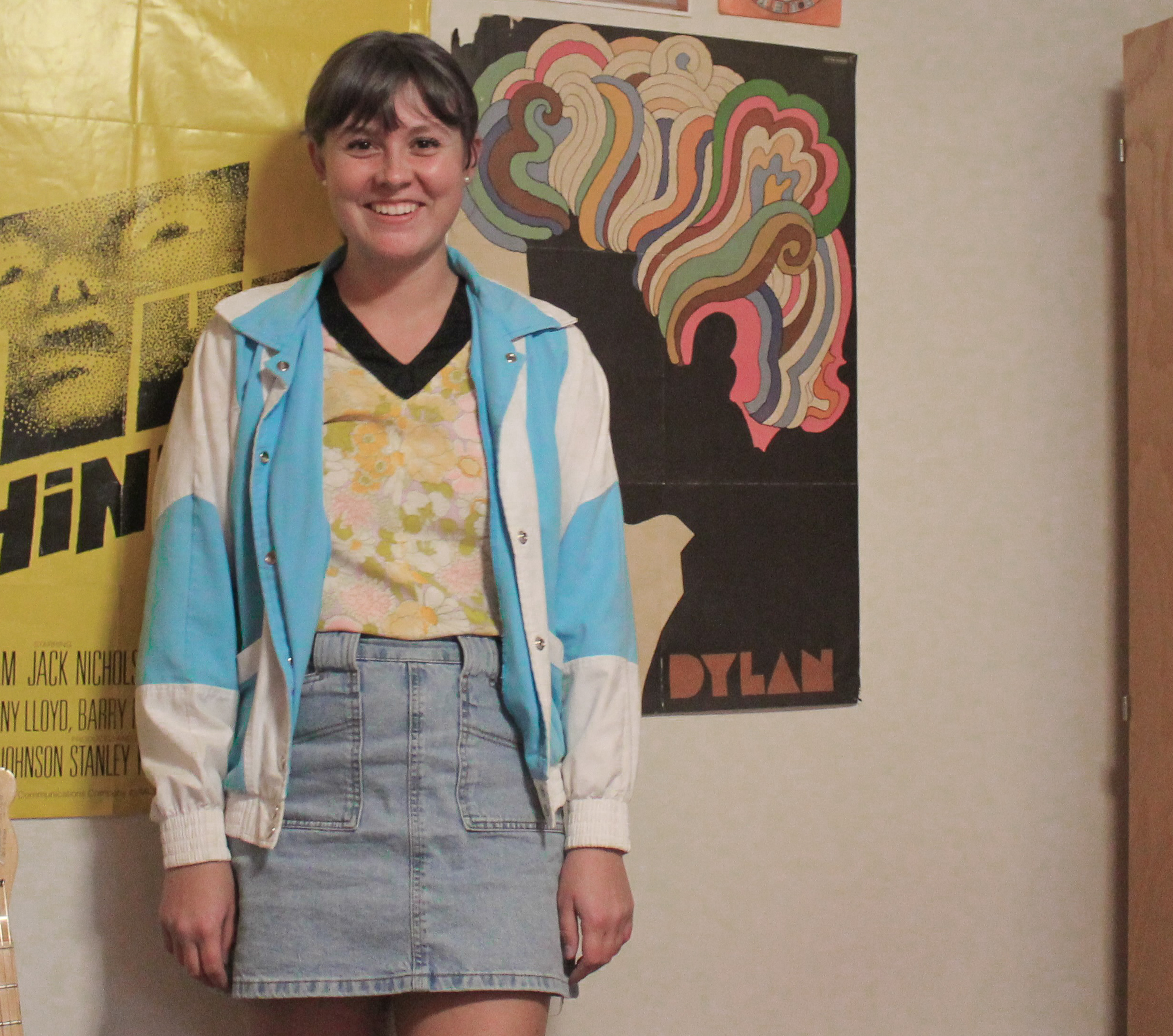 Bridget Bartal with some of her posters.

Junior English major and Spanish minor Bridget Bartal is a reputable reference for vintage style and Russian literature. She is a serial fixator who has collected an onslaught of specific passions. She seems to have an infinite breath of enthusiasm and joy for these various passions, whether it’s for her love of raw denim to The Who. All in all, Bartal loves to love what she loves, and she’s not about to stop.

“I really do only wear vintage clothing,” Bartal first stated about her own personal style. “I jump weirdly between 70s and 90s and with no in-between. Most days I’m just in a good pair of jeans and a t-shirt. It’s just about having a few good pairs of pants. Usually what I wear is so simple, but I’ll then I’ll add a good pair of earrings and it’s a cool outfit. So, I’d say it’s retro.”

Bartal’s love of vintage isn’t just a sartorial pursuit, but one that permeates all the space around her. Bartal explained this as she stated, “I like reclaiming old things. Most of the stuff in this room is probably just stuff that sat around for a really long time in family member’s basements without people using them and I made them a part of my life again. There’s a story to it all too which I like. You wonder ‘Who wore this before me, who is this girl?’ I think I just really like the sense of reusing.”

Bartal’s mission to reuse and reclaim is in part influenced by her relationship with her grandparents. As Bartal showed me a tiny sepia-toned photo of her grandparents from their wedding, she stated, “I would call myself an old soul. I have all these pictures on the wall from my 35 mm camera and a lot of stuff around here is from my grandparents’ basement. My grandpa passed this summer and my grandma passed two years ago. They lived five minutes away from me my whole life so having a few sweaters that were my grandma’s is sort of nice. I was so close to them, it’s important.”

Bartal’s grandparents aren’t the only people who inspire her love of vintage. Her father and uncle also contributed in this effort. In fact, Bartal’s first vintage piece was originally her father’s. She stated, “I get a lot of vintage pieces through familial default. My dad gave me his old shirt of The Who. My dad was like, ‘Why do want to wear this, there are so many holes in it!’ And I was like, ‘Do you know how much this is worth! The Who is one of those bands that I got really passionate about and has been my favorite band for the last four or five years. I’ve learned so much about them.”

In addition to The Who, you can often find Bartal talking about, or vying to talk about, none other than Dostoevsky, another specific passion of Bartal. Bartal explained the origin of this passion as she stated, “I didn’t know who Dostoevsky was until I did a long novel class freshmen year and we read ‘The Brothers Karamazov’ and I could not put it down. It is still my favorite book, so basically the summer after freshmen year I read a lot of Dostoevsky. And then I got a chance to do an independent study with a professor from Russia this term and she could talk about Dostoevsky for hours so it’s a dream and I’ve just been putting a lot of time into it.”

When Bartal’s not reading more about Dostoevsky or Freud (a very liberal-artsy activity, she claims), she is often thinking more about fashion. Bartal stated, “I’ve gotten pretty good at identifying when a certain piece of clothing was made, I like to know when things were popular. I basically do research on fashion. I didn’t always dress this way, either. I would look at pictures of people in the crowd of different rock concerts and feel like I could never dress like that or look like that and then probably the first year here I just realized I could if I wanted to.”

Music is a major part of Bartal’s life, from her clothes to her records. Just this summer, Bartal started playing a guitar she was given that used to be her aforementioned uncle’s. Since picking up the instrument, Bartal has managed to start her own band, The Guano Girls, and they are already playing gigs. Bartal’s interest in the instrument was once again spurred by a family member. She stated, “I started playing while my grandpa was dying. I was just going back and forth between visiting my grandpa and playing guitar. It was therapeutic, it really was the best timing. And now I’m just in the midst of all these opportunities with the band and these gigs, it’s all just happened, I wasn’t really prepared for it.”

Since starting the band. Bartal has encountered new questions about the way style and music interact, especially as a woman. Bartal stated, “As a woman musician I’ve been thinking about feeling a pressure to look like a ‘hot woman.’ Especially in a rock band. That pressure starts to take away from the music for me personally; it becomes an objectifying process. All of us in the band were thinking about what we wanted to wear, and I did really care about that, but I mean what we wear isn’t the most important thing. I ended up wearing my favorite overalls, which is something I’d normally wear, but I added red lipstick, which is something I wouldn’t normally wear.”

While Bartal has absolutely loved getting to make music with other women, the experience has opened up new questions for Bartal that she’s still sorting through. Bartal stated, “We want to recognize that there aren’t many bands of woman on campus. But there’s this weird balance between calling ourselves The Guano Girls, but not wanting to feel limited by the ‘Girls’ part. There’s also this balance between wanting to look really good but not wanting people to think you’ve tried too hard. I feel like we put that on women a lot.  Sometimes when I put on makeup, it feels like too much. Especially at Lawrence where it feels like women don’t wear much makeup. On the days I do, I feel really done-up which almost makes me feel insecure. So, I try just going day by day. If I want to look a certain way one day, then that’s just what I do.”

If you’d like to see Bartal perform with The Guano Girls, you can check them out next on October 19 when they open for the band Bully at The Draw. If you’d like, ask Bartal about 90s denim or Dostoevsky or about navigating the balance between wearing what you want but not feeling like you’re trying too hard. Bartal will have enthusiasm and joy to offer you, as she has for all the things she loves.