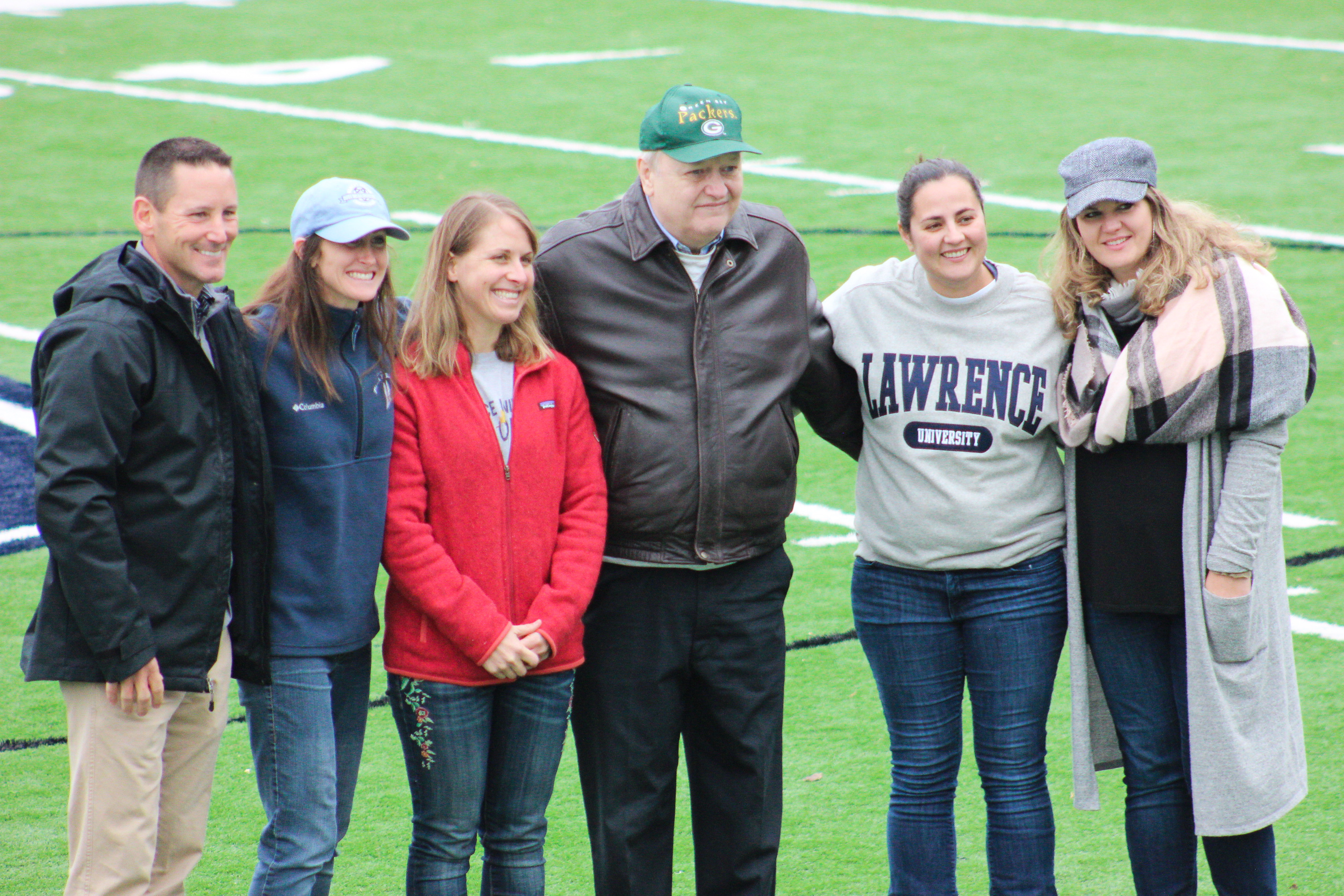 Several members of the Lawrence Athletics Hall of Fame Class of 2018 and their families were recognized at halftime of the Lawrence v. Chicago football game on Saturday, Oct. 6.

Blue and White Weekend was a smashing hit! Starting with a Hall of Fame dinner Friday night, October 5, and finishing with social gatherings throughout Saturday night and Sunday morning, many alumni have shown their faces back on the Lawrence Campus.

Pictures flooded social media claiming how wonderful it was to see old classmates, teammates, coaches and professors alike. Big smiling faces, throwback moments, laughing like never before all circulated through the whole weekend, illuminating it with joy and indescribable connection.

Friday night, seven former student-athletes were inducted into the Hall of Fame. Coaches, family, team members and current players all gathered in the Warch Campus Center to listen to all of their accomplishments with attentive and proud ears. Current athletes listened with dreams of accomplishing as much as these decorated athletes, continuing to learn and network from those who have come before them. A wonderful night of recognition and reminiscing served as a perfect transition into the following day.

The softball and volleyball programs both conducted an alumnae game day for their respective sports. Softball has their game set up where the alumnae play against the current players. Parents come out and have a tailgate of sorts prior to the games, allowing for the program to solidify as a family from parents down to players and across to the former athletes.

Alumnae from last year to all the way back to ten plus years ago got together on the softball field to play a sport that is close to their hearts. Amanda “Jazz” Jaskowski, who holds multiple school records, came back for the first time in three years to play with her fellow alumnae. She visited the week prior at a practice and expressed how excited she was after introducing herself to the newcomers. In a way, you could say she was jazzed about it.

The game itself was hard fought, but the alumnae took the win in the end, having snuck the winning run in the inning that the game was called. The older Vikes definitely brought their conference appearing A-game, but that only lead to more avid conversation post-game. The best part of having a program resemble a family is the care and thorough networking that comes out of it.

On top of that game, the softball family got together with Emma Faye, their adopted teammate from Friends of Jaclyn, and her eighth “ampaversary”, a fun day in which they celebrated the eighth year since Faye amputated her leg (which is now called Stumpy). Friends of Jaclyn is an organization that aims to improve the quality of life for children with cancer. One ways they do this is matching these kids up with teams to give them a bigger support group outside of their families. Faye has been in the softball family for almost 10 years now, and repeatedly cheered for both sides during the alumnae game. As an essential part of the family, having Faye there made the day that much more special for everyone involved.

The volleyball program, however, have a different way of involving their alumnae. The alumnae are invited back on the Blue and White weekend to play a game against each other, and then get to watch the current team play a regular season game. “Being a member of the volleyball program, we had the opportunity to play in an all alumni match Saturday morning before the volleyball game against Monnmouth. It was such a cool thing to be a part of. We played volleyball alumnae who graduated when I was born! They had some awesome stories about when they were students and it was a joy to sit down and chat with them,” said recent grad Arianna Cohen. While the alum volleyball game was a total hit, Cohen also noted, “As a recent grad, it was really fun to return to Lawrence and spend time with my classmates as well as other alumni. I reconnected with friends who used to play basketball, baseball, softball, as well as friends who I knew from classes. Simultaneous to the volleyball game, there was a football game happening at the Banta Bowl against the University of Chicago. At halftime, the newly inducted Hall of Famers are invited onto the field while the veteran announcer speaks to their success as a Lawrence athlete to the crowd-filled stands – and yes, the stands were filled. A widely-successful tailgate prior to this game brought many people from the campus and community to the Bowl to watch the 2018 Vikings take on the Maroons. While the game did not result in a win for Lawrence, the energy and pride in the school was vibrant and carried into the night.

Many alumni went out to dinner with old friends and family, basking in their old college glory days. Alumni from ages 22 and up all returned to this place to pay their respects, relive some of their own college experiences, reconnect with peers, coaches and all those falling in-between. We all decided on Lawrence for a reason, and this past weekend allowed us to celebrate it properly.

We are Vikings for life.