What can the past reveal about today? 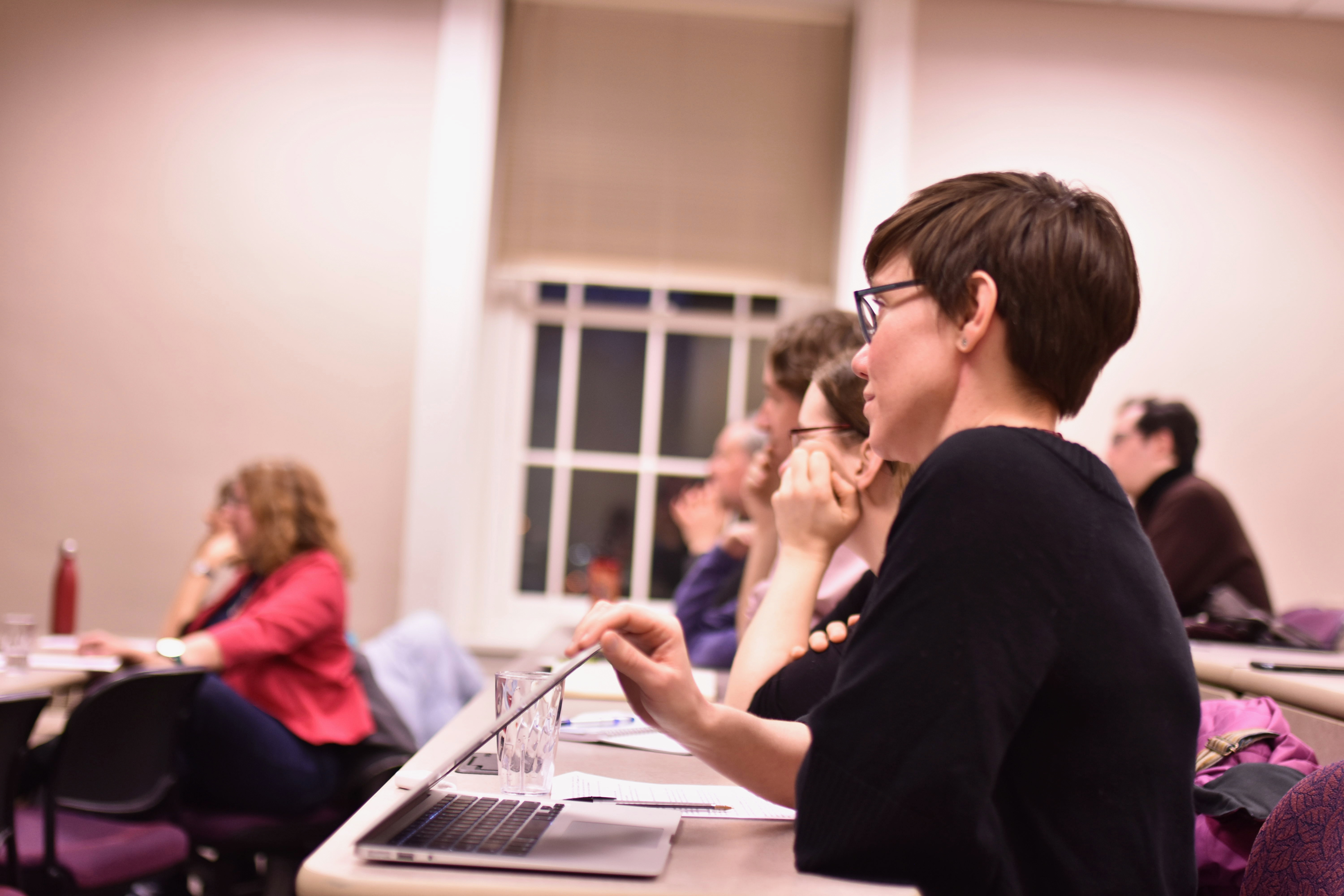 On Jan. 22, eight faculty members gave a lineup of presentations entitled “XIXing 2019: What can the past reveal about today?” The event was part of an ongoing Main Hall forum series, and each presenter gave a rundown of historical events in a year ending in ‘19. They were also asked to connect what they said to the present day to put current events into context. After all, history repeats itself.

Professor of Classics Adriana Brook lectured on Athens the year 419 BCE. “Around this time, Athens had been experimenting with more extreme forms of democracy,” she said. “Most government positions were handed out basically at random.” One such official who was actually elected was Pericles. Pericles had been elected to the position of general numerous times and was very popular. Upon his death in a plague, a new era of demagogues was ushered in, shaking up the groundwork of democracy in Athens.

Brook gave an important example: during the Peloponnesian War, the city-state of Mytilene attempted to revolt against Athens. Athens made plans to kill and enslave Mytilene’s citizens but quickly realized the brutality of the decision and halted the operation in favor of only punishing those directly involved in the rebellion. Connecting events like this to today, Brook said, “People are starting to wonder if democracy really is our best out. For example, can’t Britain just change its mind on Brexit? Does the electoral college really work? I think that the Athenians would advise us that we shouldn’t do away with democracy but work to reform it.”

Moving forward to 19 BCE, Professor of Classics Randall McNeill talked about Augustus in ancient Rome. “After a period of civil war, Augustus was negotiating with the Roman state to see what his role would be,” McNeill said. “Since the current model of the republic had been failing, he had the option of declaring himself emperor.” Augustus decided not to do this, however, out of fear of being assassinated like Julius Caesar. Instead, he decided to take control of the republic behind the scenes. The façade of the republic was maintained to the public, but its real mechanism was Augustus. One thing he orchestrated from here was a “fake news” campaign. “Once the civil war was over, the Romans thought it was time to go back to doing what they did best: war with other people,” McNeill said. The Roman people had been expecting a war with Parthia, but Augustus decided to keep the fragile peace. He negotiated with Parthian leaders and ended up distributing coins with iconography of military victory: a Parthian kneeling in defeat. McNeill said, “Roman citizens must have thought: Oh, we had a war. Go Rome.” McNeill believes that events like this show us that we shouldn’t assume that the way a constitution is written isn’t necessarily how it functions. Following Augustus’ example, any state system could have its puppeteer.

Professor of Art History Danielle Joyner told a story surrounding a man named Theo in the Holy Roman Empire on his birthday in 819. Theo was granted access to an astronomical encyclopedia in a library and searched through it for drawings of Zodiac charts and celestial bodies. He was amazed by the links between the times of the year and positions of the stars and remembered being told, “The cosmos are always making music.” Once satisfied, he reflected on his gratitude for the education he had received and all the teachers in his life. Joyner ended with a tongue in cheek remark: “And, most of all, he was grateful that he could trust that leaders were well educated.”

If you were asked which ancient civilization you could visit, what would you say? Probably not the Fatimid Caliphate, which Professor of Religious Studies Martyn Smith called “the coolest empire you’ve never heard of.” Smith said, “Though you’d never guess by the number of Shia Muslims today, the Fatimid Caliphate was an ascendant Shia empire spanning much of northern Africa. It produced numerous pieces of beautiful art and architecture and led an interesting fusion between Islam and Neoplatonic thought.” Smith’s main focus was the rule of caliph Al-Hakim bi-Amr Allah from Cairo around the year 1019 CE. Al-Hakim was a controversial ruler; while he was generous and admired by many, he made a number of harsh, erratic moves. He banned innocuous foods such as arugula, cracked down on women being in public, ordered curses against every Sunni caliph and even tried to destroy the Order of the Holy Sepulchre in Jerusalem in 1009. His rule is important to remember today, Smith said, because it raises the question: “What is the breaking point for madness in a leader?”

Professor of Music, Sara Ceballos, referred to the book “Champion des dames,” by Martin le Franc, as it illustrates a shift in musical taste around 1419 in England. Le Franc named several singers who were critically acclaimed at the Council of Constance; they were lauded for exemplifying “the English style.” After playing a few examples of songs they may have sung, Ceballos emphasized how important music patrons were in determining people’s tastes at the time, calling them “tastemakers.” “If something like the Burgundian school of composers could shape music for the following hundred years, you should ask yourself: ‘Who is making your taste?’”

Professor of English Garth Bond’s lecture was presented in absentee by postdoctoral fellow of Jewish Studies, Elliot Ratzman. Bond talked about the events leading up to Henry VIII’s declaration of the Church of England around 1519, such as his frustration over not finding a male heir. He discussed the refusal of Thomas More (author of “Utopia”) to acknowledge Henry’s supremacy, leading to his execution. The lecture’s title, “Calm Before the Storm,” presumably alludes to the current day preceding a storm. Bond suggested that the audience check out the film “A Man for All Seasons” about Thomas More.

In another lecture about 1519, Professor of History Edmund Kern discussed the importance of the printing press in Germany. “The printing press then had a similar, though less drastic, effect compared to the internet today,” he said. His talk revolved around Martin Luther’s numerous escapes from legal action after distributing his controversial ideas in print. Elector Frederick of Saxony continually protected Martin Luther from arrest even after his being named an arch heretic. Part of his success was again attributed to the printing press. According to Kern, due to distributed information Martin Luther, “Peasants across the German countryside threatened to rise up if a hand was laid on Martin Luther.” Kern’s connection to today was in Frederick’s being a prosecutor. He said, “We’ll see what Prosecutor Robert Mueller has to say.”

Professor of History Brigid Vance lectured on the significance of the Donglin Academy in China’s Ming dynasty around 1619. Members of this school of thought believed that the Wanli emperor was not ruling from moral authority due to his apathy and disconnect from the everyday lives of his constituents. This effort to appeal to the emperor and change his methods of ruling led to the execution of Yang Lian, head of the Donglin Academy. His death made him a martyr, prompting Vance to ask, “What role do intellectuals have in politics? What about the role of higher education?” She argued for their role by referencing the Book of Changes (a Chinese divination text), saying that only individuals acting to create a collective moral imperative can uphold peace.

The emphasis of the talk seemed to be implying that the main application of these ideas is in modern politics, mainly the Trump administration. However, as useful as these analogies may be, there are limitless other places to apply them. Considering the cyclical nature of history, certain ideas become timeless as far as intellectual curiosity is concerned.