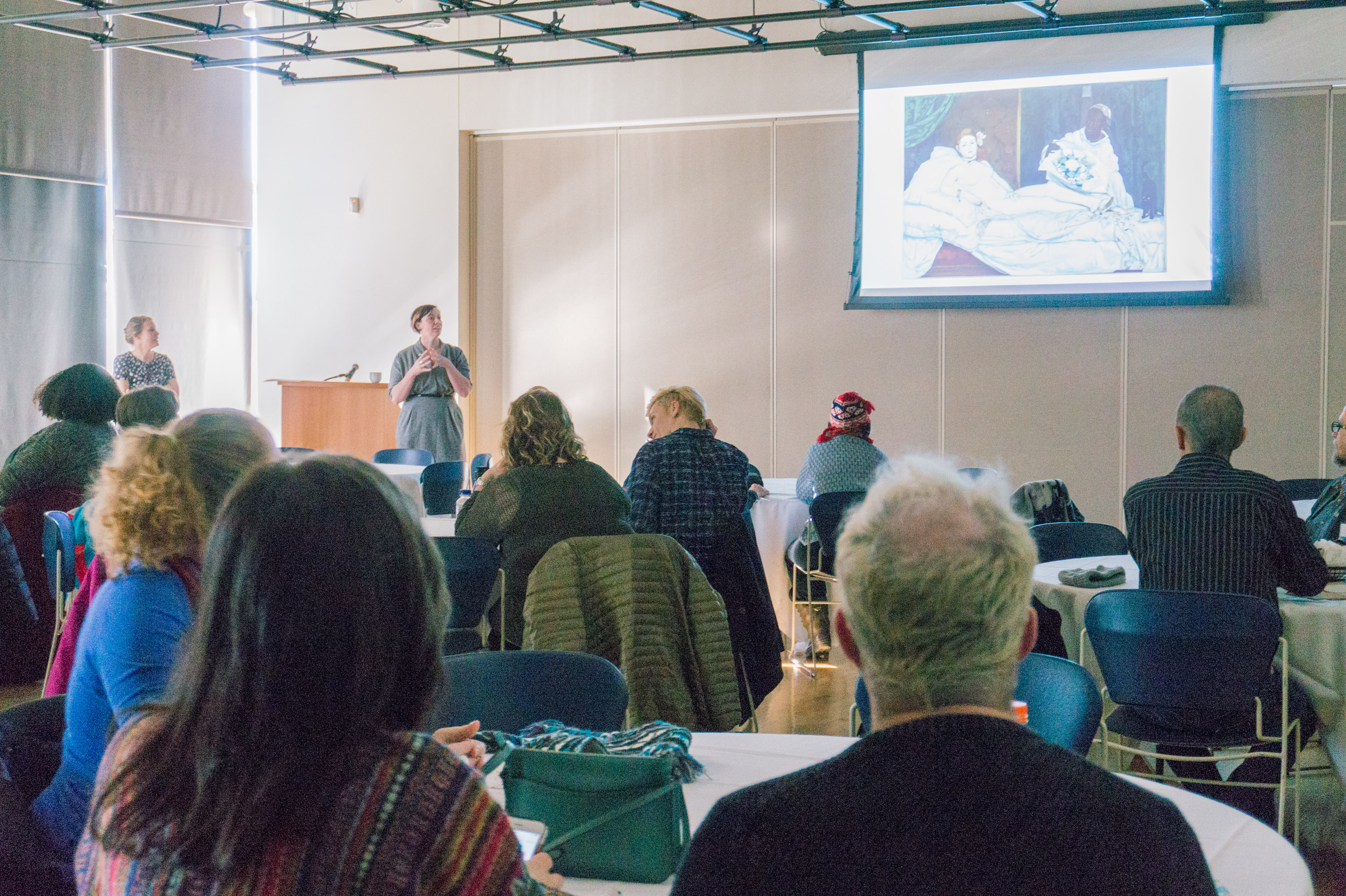 To teach attendants how to discuss controversial art, the cultural competency lecture “More Than Meets the Eye: Engaging with Controversial Art” was presented by Assistant Professor of Art History, Curator of the Wriston Art Center Galleries and Museum Studies Interdisciplinary Area Program Director Beth A. Zinsli and Associate Professor of Art History Elizabeth Carlson in the Esch Hurvis Room of Warch Campus Center on Wednesday Jan. 16 at 12:30 p.m.

“The hardest art to talk about,” said Carlson, “is the art where I’m caught off guard.” Carlson and Zinsli began by mentioning how many people think controversial art is synonymous with contemporary art. Both professors countered this assumption by saying that the viewer’s identity is what makes art controversial.

The first painting that was discussed was “Olympia” by Édouard Manet. When the audience discussed “Olympia,” they weren’t given the title or the name of the artist, which made it visible how much modern ideas influenced what the audience thought would have been controversial in 1865 when the painting first appeared in an art gallery.

The audience generally thought that what would be controversial about the art was that it appeared that the painting was depicting a sex worker. What was actually controversial was that, to the viewer in 1865, it looked like she was in a morgue, and that she looked like a disgraced version of Titian’s “Venus of Urbino.”

While discussing “Olympia” by Manet, Carlson and Zinsli introduced the idea of viewing a work of art as a historical moment that also continues to be in the present as people view it today.

Next, Zinsli and Carlson showed two paintings by Archibald Motley called “The Octoroon Girl” and “Mammy.” With both of these paintings, both professors emphasized the importance of reading a painting correctly by keeping in mind who the artist was and what the time period was.

For these paintings, it was key to understand that Archibald Motley was an African American man and that these were painted in the 1920s as portraits that were meant to show dignity in their subjects. “Time and place,” stated Carlson, “really make a difference in how we understand and discuss art.”

In contrast with Motley’s paintings, they then showed a painting titled “Open Casket” by Dana Schutz, which graphically depicts the open casket at the funeral of Emmett Till. This painting was the source of significant controversy in 2017 when it appeared at the Whitney Biennial. This is due to the fact that it was painted by a white artist which many saw as inappropriate.

To conclude the lecture and discussion, Carlson and Zinsli encouraged the audience to consider present and historical context of both the subject matter and the visual style, authorship and exhibition space when looking at and discussing art in the future.

After this statement, they took questions from the audience. The next cultural competency lecture will be “Islam in America: The Success Story of Dearborn, Michigan” by Prof. Martyn Smith, held on Wednesday, Feb. 13.

The talk was given by Assistant Professor of Art History, Curator of the Wriston Art Center Galleries and Museum Studies Interdisciplinary Area Program Director Beth A. Zinsli and Associate Professor of Art History Elizabeth Carlson. Photo by Taylor Blackson. To teach attendants how to discuss controversial art, the cultural competency lecture “More Than Meets the…