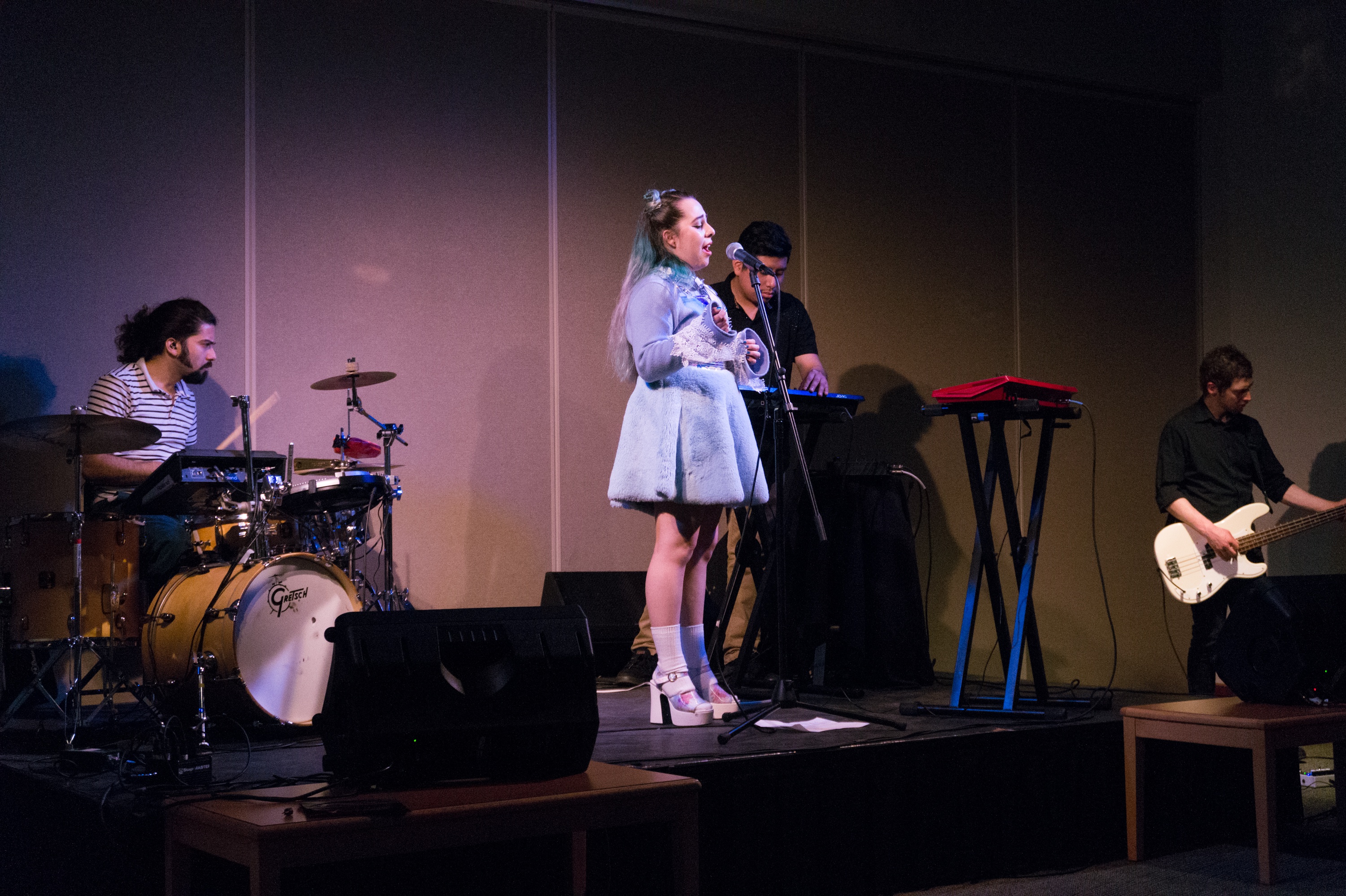 Sin Color performing to a packed crowd in Mead Witter.

On Thursday, Feb. 21, Alianza, a student organization that brings awareness to social and political issues facing Latinx students, hosted L.A.-based band Sin Color in Warch Campus Center in celebration of People of Color Empowerment Week. Sin Color’s lead singer, Crisia Regalado, is classically trained in opera and the band combines her specific style with the sounds of bossa nova, cumbia, pop and disco to create their own traditional, pop and dance music. At their Lawrence performance, the band switched effortlessly between traditional Spanish ballads and electronic dance beats. They performed a few covers, including Minnie Riperton’s “Lovin’ You,” but stuck mainly to their own unique songs.

Regalado stepped on stage dressed in a monochromatic eclectic light blue bubblegum girl outfit. Platform heels, space buns and a shimmering shirt and skirt made her the center of the room. The full band was with her: drums and keyboard at the back with the bassist and guitarist to the left and right of the small stage. Introducing the musicians halfway through the set, Regalado also noted where each person was from—El Salvador, Puerto Rico, California and Mexico. They are based out of south L.A. now, but the influence of Latin pop and traditional Latin music informs a lot of their sound. The guitarist played the electric guitar how one would be expected to play a classical guitar—light and rhythmic and very fun to watch. The rhythms that the band achieved with their danceable drum beats, fun synth sounds and other percussion beats made it hard not to tap your feet or get up to dance.

Regalado’s opera background is evident in her singing, and she uses her large range to expand the band’s genres even more. Her singing is expressive, done in Spanish and occasionally English, and when she has breaks in a song, she dances or steps to a small synth for some instrumental jams. Her range enables her to use her voice as different instruments, singing along with the keyboard or guitar or adding “oos” and “ahs” I didn’t know a human could do with their voice. Several times during the show, I saw audience members drop their jaws at the strength and talent of Regalado’s voice. Each member was charming and passionate, and in between songs, Regalado used the break to tell the audience, “I hope this music reminds you that you’re amazing,” and told us that taking breaks to experience things like music is important.

After a pause at the end of the show, Regalado said into the microphone, “This is when you’re supposed to chant ‘otra, otra!’” which the whole room then started to chant. The last song was a Cumbia song, with a bit of a synth and electronic flare to it. People finally stood up to dance and the atmosphere was lively and wonderful, with people stopping by to watch and listen after hearing the music echo throughout the building. After a standing ovation, the audience moved to look at the merchandise table or speak with the band personally about how amazing the show was. Right next door, the Uncovered Art Show was going on, so many people headed over to support the student art. But five minutes later, Regalado’s voice could be heard through the walls as she belted out an impromptu solo after-show for a smaller audience. The power of her voice amazed the small crowd, and for a few minutes, the group was speechless.

The band made it clear how grateful they were to be here, even in the harsh weather. They were passionate and lively, talented and kind. Sin Color can be found on Spotify and Soundcloud and has a social media presence on Facebook and Instagram. Check them out!