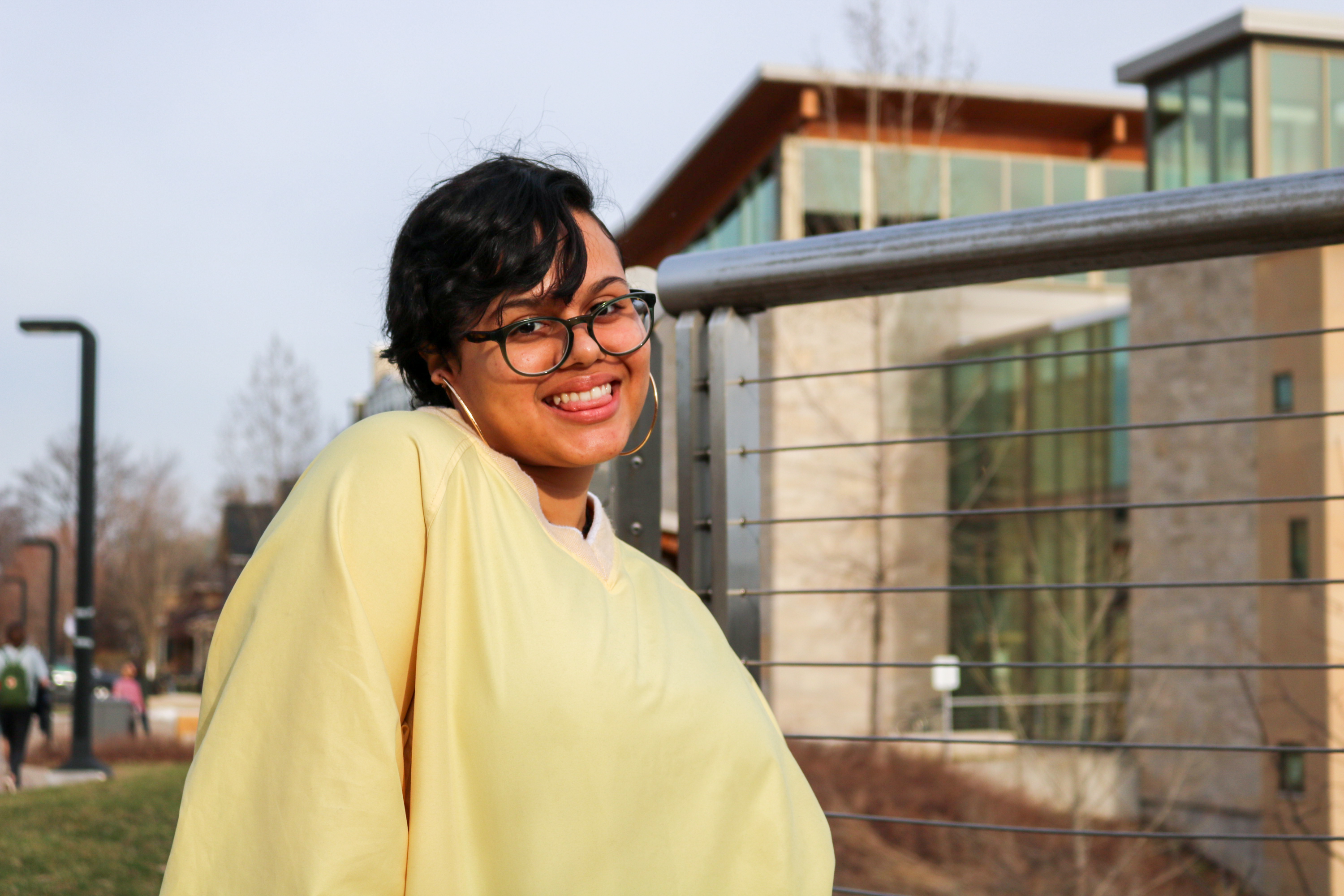 To identify as a womxn is to expect solidarity with others who identify the same way. The assumption that there is a universal and singular womxn experience erases the nuances and variety that exists. This column seeks to address those intersections in an effort to celebrate and deconstruct the reality of womxnhood by exploring the various ways it is expressed.

In the midst of this interview, freshman Meralis Alvarez-Morales asked if we could break for roughly 30 minutes. One could imagine that a conversation based deeply in personal experiences could become overwhelming, but that was far from the reason why she asked for this recess. Alvarez maintained a calm demeanor throughout the interview, even while juggling issues regarding the personal, politics, economic mobility, social injustice, abstract concepts, religion and all the interconnected webs that exist in her life.

Alvarez quickly logged on to a scheduled phone interview for a potential internship in her hometown of Chicago before launching right back into our conversation. If there is one lament Alvarez has, it is that there is not enough time for all her activities (notably as the Project Coordinator of LUCC, Vice Chair of Student Welfare Committee and a chair nominee to both the Judicial Board and the Committee on Diversity Affairs (CODA)). Alvarez spreads herself thin sometimes, all in pursuit of her singular ambition. Her singular focus, however, does not limit but rather empowers her. She retains her agency through all of her decisions with a keen self-awareness and fearlessness.

Alvarez was born in Ponce, Puerto Rico, but she spent her formative years in Chicago, Illinois. Her family retained a strong connection to their homeland and national identity, notably through exclusive use of Spanish at home, but there was a schism for Alvarez. She felt like she would never belong anywhere because she could never be American enough or Puerto Rican enough. Even becoming bilingual became a balancing act. “I had to learn English to survive, not to communicate,” she explained. “I realized that when you don’t know the language, people control your narrative, make you look incompetent and take away your agency. [I] learned the language to become autonomous over my being.”

As much as she loves Chicago and the camaraderie it fosters, there is a darkness that is undeniable. Coming to Lawrence, Alvarez had hoped to get in touch with a softer side of herself. Instead, Alvarez finds herself to be much harder—for the better. Now, she is unwilling to compromise on her purpose and will break tradition if necessary to create opportunities for herself. “I already am everything I envisioned myself to be,” Alvarez said, “but [my motivation] is improving my quality of life, my parents’ quality of life. I have a clear vision of what I want my life to be, but in order for me to ascend, I had to descend into knowing myself. I wanted to be the best version of myself.”

“I want to be a professional recording artist,” she continued, “sharing my music, my story and my experience. I want to take back my agency and widen the light given to Puerto Ricans. I want to be a part of the rewriting.” She left the Conservatory of Music in her determination to break into that space by paving her own way. Alvarez noted that currently, the Puerto Rican voices that dominate the music industry are distinctly masculine and consumerist. The door hasn’t been made wide enough for Puerto Rican womxn, especially ones that aspire to use their platform to both empower and make bodies of art. Alvarez wants to widen that door and create meaning through her multidimensionality.

Alvarez is distinctly aware of how easily her narrative and voice can be silenced or manipulated. She maintains that Western culture prefers only to allow one voice from a group speak for its entire population and that it further labels that voice as the group’s definitive experience. Outreach for diversity and inclusions tends to be superficial because of this notion. It is why she is so adamant in her involvement in student organizations that offer outlets to express onself. Only she will be able to speak and fight for herself. If other Puerto Rican womxn relate to her experience, good comes from her persistence. If other Puerto Rican womxn rise up and rebel against her perspective, all the better. Her presence will have opened opportunities for their involvement and changed the focus.

Alvarez refuses to be categorized by simplifying identifications that produce generalizations. This is why she does not consider herself a feminist because of its historical tendency to exclude non-white womxn. She finds herself leaning more towards womanism, but even within that ideology, there are problems in its discourse because it also suffers from the same flaw.

“I stand up for whoever I stand up for [because] injustice is injustice,” Alvarez said. “If I were to just say I’m advocating for the Puerto Rican community, I have to realize that there are so many communities that exist within that one community. To make generalizations is dangerous because it limits.”