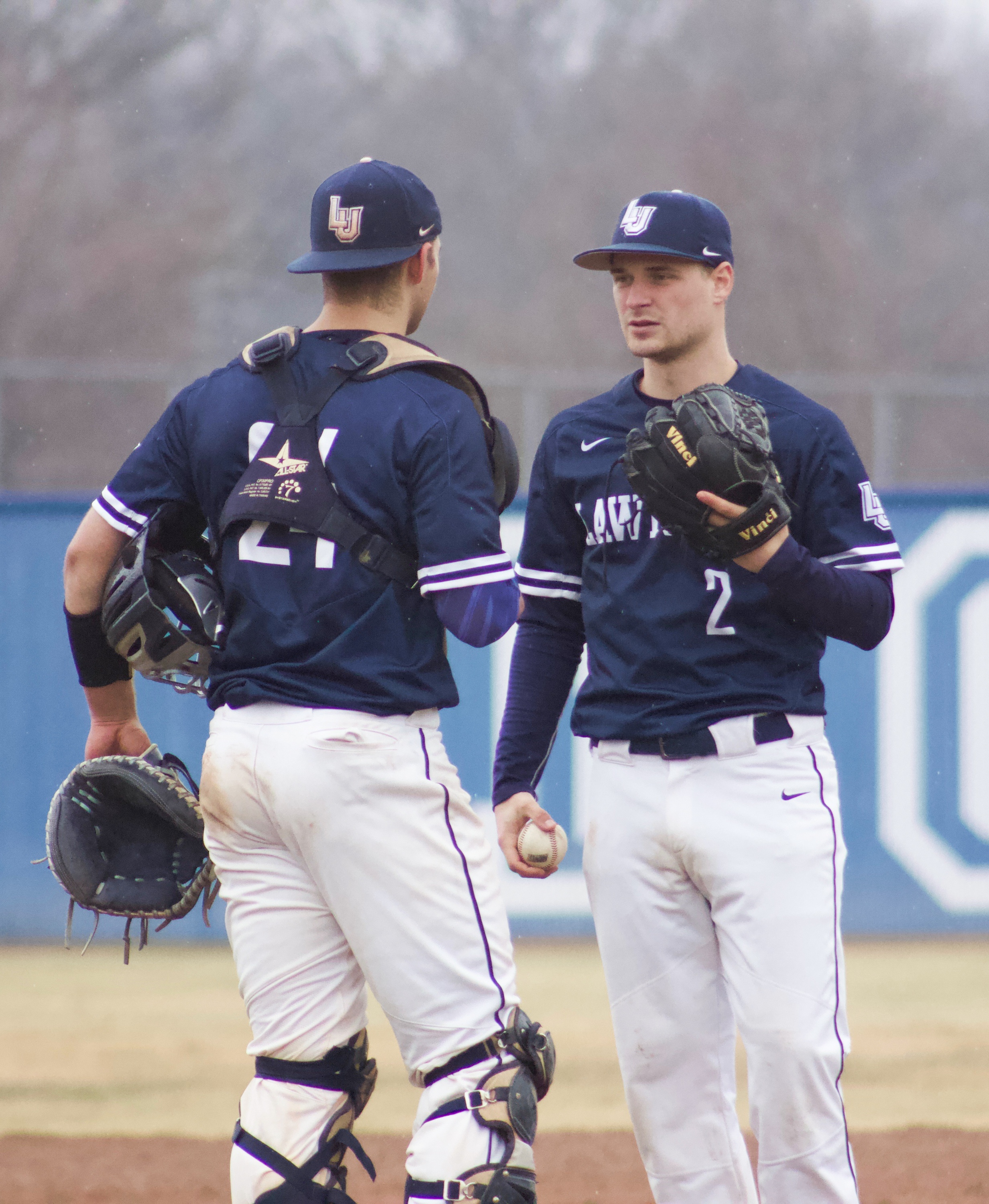 Junior Patrick McDonnell has a strategic chat with his pitcher.

This week has been a difficult one for the Lawrence University baseball team. They were supposed to host a double header against the University of Chicago on Monday, Apr. 22; however, a pair of home games was not in the cards for the Vikings due to the rains flooding their field. Needing to get the key divisional conference games in before the end of the season, Lawrence headed down to Chicago yet again to play the games. The University of Chicago is a formidable opponent, as they boasted a 15-6 overall record and a 4-2 Midwest Conference record going into the games.

It proved to be a challenging day for the Vikings offensively, as they only were able to amass four hits across the two games. In the first game, the University of Chicago put together three “three up, three down” innings to start the game. Lawrence’s first base runner came in the bottom of the fourth inning when senior Nolan Spencer was hit by a pitch. At this point in the game, the Vikings were already down by six runs. The University of Chicago wasted no time getting on the board, as they scored in the top of the first inning. They added four more runs in the third inning and then another run in the top of the fourth inning to extend their lead to 6-0. The University of Chicago then had a massive fifth inning in which they scored eight total runs off of two singles, two doubles and a triple. The Vikings were finally able to string something together in the sixth inning. With two outs, Spencer walked, bringing freshman standout Spenser Ross to the plate. He singled to second base and Spencer was able to advance to third on the play. Then, sophomore Nick Pastrone hit an RBI single to right center and Lawrence was on the board. The score stood at 14-1 at the end of the sixth inning. The University of Chicago added three more runs in the seventh inning to win the seven-inning game 17-1. Ross and Pastrone were the only Viking hitters able to record a hit in the game.

The second game got off to a better start as three of the first four Lawrence batters were able to reach a base. Spencer walked to get things going and Ross grounded out; however, Spencer was able to advance to second on the play. Pastrone then reached on a fielding error, bringing junior Patrick McDonnell to the plate. He singled up the middle allowing Spencer to score and the Vikings took the early 1-0 lead. Unfortunately, Lawrence struggled from there. The University of Chicago scored four runs in the second inning and another two in the third to take a 6-1 lead. They kept pouring it on as they scored three runs in the fifth inning, four runs in the sixth inning and another three runs in the seventh inning. In the end, the University of Chicago won the second game 16-1 in seven innings. Ross and McDonnell recorded the only Lawrence hits in the contest.

The Lawrence pitchers struggled throughout the day as they gave up 13 walks to only three strikeouts in the first game. The second game was not much better, as the Viking pitchers walked seven and struck out no University of Chicago hitters. However, they did not give up a home run in either contest.

With the two losses, Lawrence’s record falls to 3-16 overall and 0-8 in Midwest Conference play. They are currently sitting at the bottom of the North Division of the conference. There is little time to dwell on these games or rest, as the team prepares for important games against Beloit this coming Saturday, Apr. 27, and Sunday, Apr. 28. Lawrence is scheduled to travel down to Beloit College on Saturday for a double header before hosting the Buccaneers for another double header on Sunday. The team hopes to start putting things together and end the season on a high note.