Softball in the heat of conference 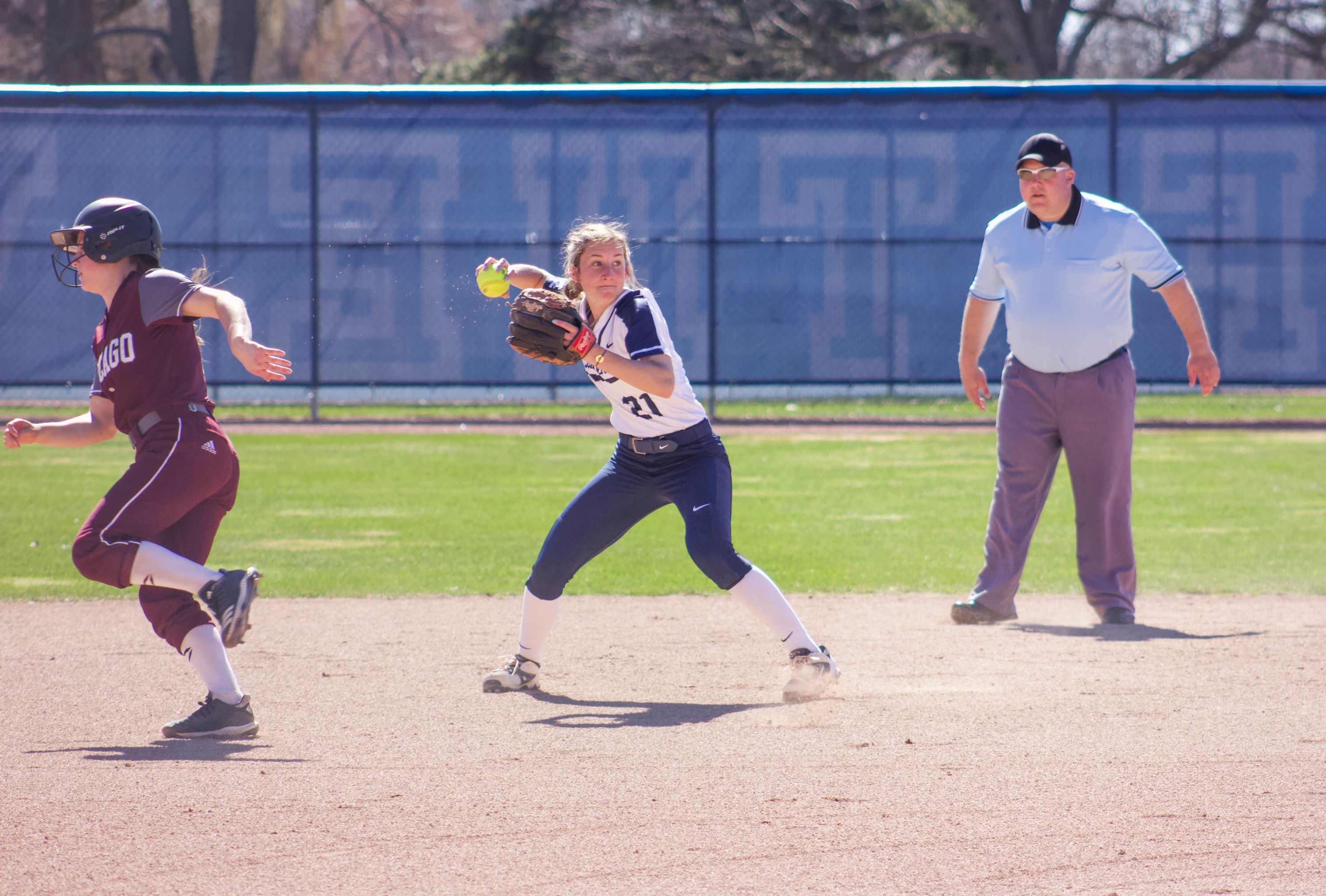 Above: Senior Rachel Urich makes it look easy as she fields the last out of the inning.
Below: Sophomore Ceara Larson works hard in dirt against Chicago, earning her second Midwest Conference Player of the Week honors.
Photos by Caroline Garrow.

Part of the success for the Vikings came from the depth in their offensive line-up and in their defensive game. “Playing double headers is something our program is very used to,” commented junior Emilia Jackson. “Thanks to our intense off-season practices and workouts, our team is equipped with enough endurance to be effective and successful in double headers.” Not only is it important to have enough endurance for the back-to-back games, but the team also needs to have an abundance of energy and drive in order to have a positive mindset when they play. “Maintaining our energy and drive against both Ripon and University of Chicago was an integral part of our victories,” added Jackson.

Against Ripon, the Vikings won the opening game of the double header 5-0. Jackson pitched the game and allowed six hits and had a total of four strike-outs, but she still managed to hold on and earn a shutout. During the nightcap, senior Madeline MacLean allowed three hits and managed to strike out a Ripon player, only sacrificing one run in their 9-1 win. “In the Ripon double header, we had the intention of winning some conference games,” stated junior Maria Reiter. “We were excited to be able to play despite the weather conditions.”

In the opening game of the Chicago double header, the Vikings had their first weekend home game and had a great turnout from students, families and coaches alike. “Playing at home this past Saturday was so nice,” commented Reiter. “We have been playing on the road for most of our season, so it was very nice to see a good fan turnout.” The fan participation was a great energy booster for the Vikings in the double header on Saturday, and it helped carry them to the 1-1 split with Chicago. The Vikings won the opening game 4-2. Jackson pitched for the opening game again, allowing eight hits and two runs, and she also stole two strikeouts. The Vikings were not as fortunate in the nightcap against Chicago, but managed to stay relatively close in runs until the final inning, losing 11-7. MacLean was the first pitcher in the nightcap. She allowed 11 hits and six runs, while junior Lexi Angemi stepped in as a pitcher and allowed one hit and one run while managing to strikeout one player from Chicago. To bring the game to an end, Jackson stepped in and allowed five hits and four runs. “The support we got from fans was crucial in our success over Ripon and University of Chicago,” commented Jackson. Being on the road can be tiring for the Vikings, but as long as they get to play, they are happy.

Looking ahead, the Vikings have some important conference games in the remainder of their season. All of their conference games are played over a one-month period, meaning that their season is very quick when it comes to playing the other conference teams before the Midwest Conference Championships. “Our number one goal as a team is to make the Conference tournament,” stated Reiter. “We also want to continuously improve and grow as a team.” Currently, the Vikings are ranked sixth in the conference and have some tough games ahead of them against Lake Forest College on Thursday, Apr. 25, and Illinois College and Grinnell College this Saturday Apr. 27, and Sunday, Apr. 28, respectively. The double headers this weekend will be played on a neutral site in Janesville, Wis. and Thursday will be their last home conference double header. If they take these games one inning at a time, they will be able to focus on the current competition and hopefully come out on top and move up in the ranks of the conference. Jackson commented, “As long as we come out to each game with positive energy, passion and 100 percent effort, we believe we will be successful.” If they make it into the top four in the conference, the team will head into a double elimination Midwest Conference Championship Tournament.  With the amount of unique love and support that the Vikings give each other, the team should have little to no problem moving forward and achieving their goals laid out before them. Hopefully the weather will prove to be favorable over the next couple weeks of competition.