Catching up with the Green Roots initiative 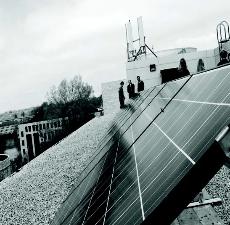 Beginning nearly two years ago in the fall of 2008, the Green Roots Initiative has impacted the Lawrence campus in many noticeable ways.
Green Roots’ website describes the initiative as “a two-year long environmental initiative that will establish the framework within which we will initiate specific institutional policies and procedures to ‘green’ Lawrence.”
These policies and procedures have included programs such as Recyclemania – a program designed to reduce waste – and bringing in lecturers. The organization has also reduced paper use through various means. Printers have been purchased that are capable of printing double-sided. Physical course catalogs were replaced with .pdf files as well.
Jeff Clark, associate professor of geology and chair of Green Roots, put it in perspective: “2,000 copies of those catalogs], 350 pages each; that kind of thing adds up.”
The Presidential Report was also combined with an issue of Lawrence Today to cut back on paper use.
On top of organizing programs designed to reduce Lawrence’s impact on the environment, Green Roots also brings in lecturers on various subjects. Last May, Green Roots brought in urban farmer Will Allen, the man responsible for Growing Power, an organization that stresses the importance of
farming fresh foods, especially in urban communities.
While at Lawrence, Allen discussed the health problems of inner city populations and solutions that could be obtained with urban farming.
Besides organizing specific policies, Green Roots also facilitates students’ initiatives by pointing out opportunities and funding that Green Roots itself cannot provide. They helped Greenfire bring political activist Ralph Nader this past Sunday to give his talk, “The Great Conversion: Environmentalism
over Corporatism.”
Besides speakers, Green Roots also pointed students Will Meadows and Austin Federa towards resources that they could use to have solar panels installed on the roof of Youngchild. Most of the funding for the solar panels was provided from institutions outside of Lawrence.
Clark confirmed the future of Green Roots, stating, “The committee itself is going to continue essentially in the same format for another three years.”
Clark says that one area he hopes to expand on in the future is energy use and reduction. Over the winter, Green Roots was responsible for lowering the unused dorm temperatures to 68 degrees. This policy helped reduce Lawrence’s energy cost by ten percent and lowered overall carbon dioxide output.
In the future, Clark hopes that the data gained from Recyclemania can improve Lawrence’s ability to recycle. Even though Lawrence placed highly in amount of materials
recycled, we still produced an overwhelming amount of waste. Clark hopes that Green Roots can look at the data and understand what can be done to improve Lawrence’s waste reduction.
A problem that Green Roots faces has to do with balancing projects. Clark says that projects that provide insulation for buildings across campus would lower costs and provide environmental benefits. However, these projects do not excite the public as much as the installation of solar panels.
Said Clark, “We’re always playing that game too, impact versus visibility. 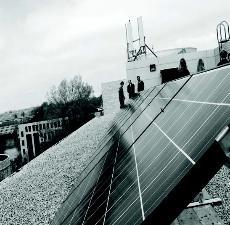