Metcalf on the cutting edge of modern music at the con. 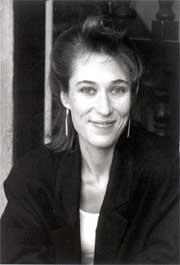 A new face at the Conservatory is strengthening the base for contemporary music at Lawrence. Joanne Metcalf, recently hired for a tenure-track position, brings her international experience to the composition department.In Europe, Metcalf has been constantly engaged, beginning with her studies with the Dutch composer Louis Andriessen and continuing up to her ongoing relationship with the highly-regarded vocal performers named Hilliard Ensemble.

Last week, a member of Hilliard, the tenor John Potter, premiered her song cycle Doom-Begotten Music in York, England. Hilliard has also released the CD recording A Hilliard Songbook, which includes Metcalf’s choral work Music for the Star of the Sea.

In August, there will be a premiere in Germany of her song setting of texts from Song of Songs.

At Lawrence, Metcalf says that one of her goals is to help “keep people informed about the world of music, with what’s going on in Europe in America…and inspired by what is going on now in contemporary composition and performance.”

Regarding the students she has worked with so far, she says, “I’m really impressed and amazed at just how hard-working my students are. They’re awesome. People seem to be interested, curious, and very much wanting to learn.”

Metcalf’s music will receive a Lawrence premiere when Jonah Nigh performs three movements of Doom-Begotten Music at his senior recital. The text and title are taken from Edward Arlington Robinson’s Tristram.

Nigh also performed the movements at the Faculty Composition Recital on May 14.

As a professional musician, Metcalf’s experiences have ranged widely. In Los Angeles, she was a founding member of an experimental vocal ensemble that used improvisation and extended vocal techniques.

Since then, she has focused on composition, including her studies at Duke University and a residency where she lived and worked at the Aaron Copland House.