President of Microsoft returns to Appleton to deliver talk 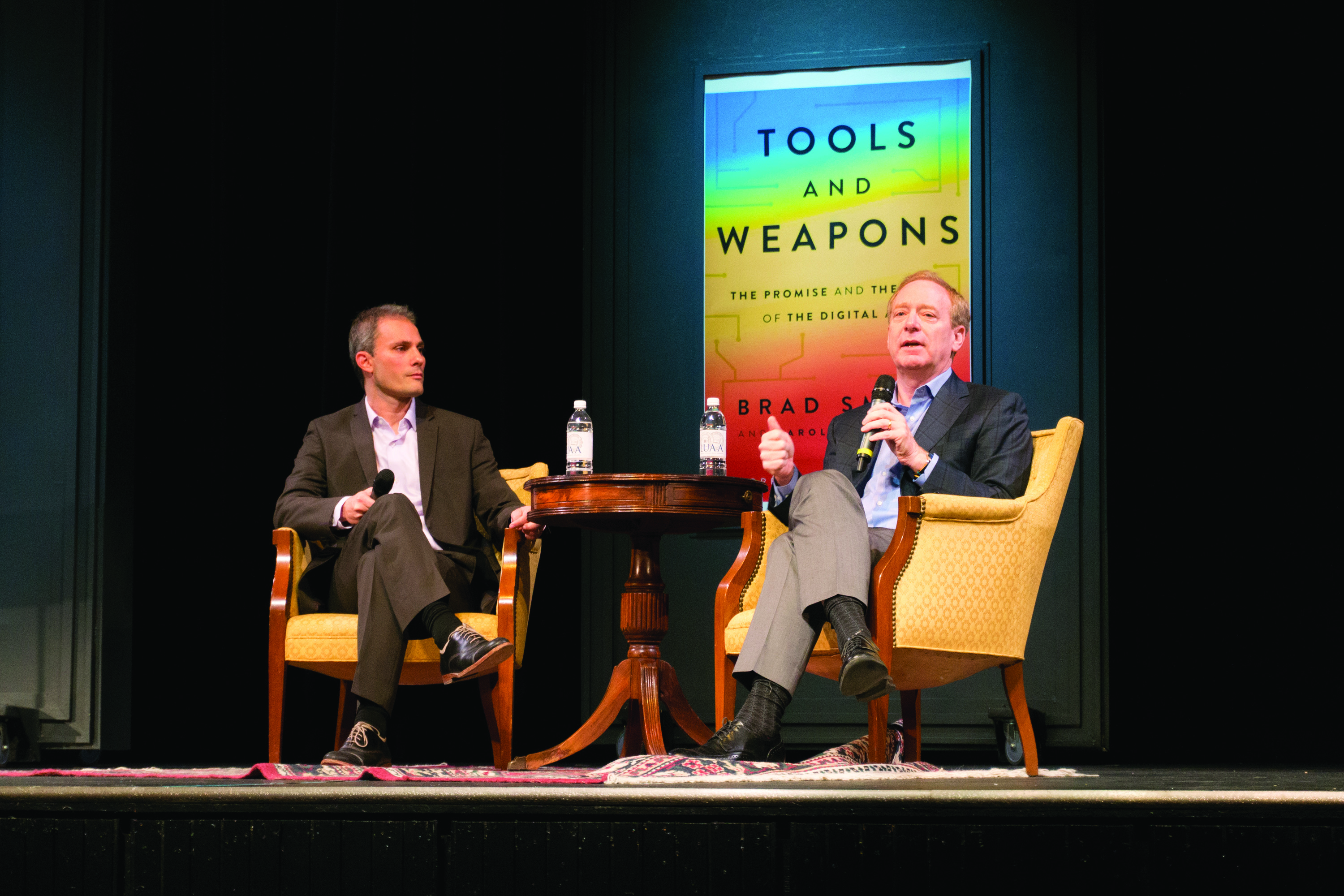 On Friday, Oct. 18, Microsoft President Brad Smith returned to his hometown of Appleton to deliver a talk on his book “Tools and Weapons: The Promise and the Peril of the Digital Age.” The event took place in Stansbury Theatre but was open to the public. The first half was formatted as an interview between Smith and Professor of Mathematics Scott Corry, and in the second half of the event, the floor was opened up to audience questions.

Brad Smith has worked at Microsoft since 1993, currently serving as the president and chief legal officer. Smith worked on various issues over his career including immigration, cybersecurity, privacy, ethics, artificial intelligence and human rights and has been described by the New York Times as “a de facto ambassador for the technology industry at large.”

Preceding the talk was a musical performance by junior Ben Portzen and seniors Zoe Markle and Nolan Ehlers. Smith was introduced by Dean of the Conservatory Brian Pertl who spoke briefly of his own time at Microsoft before coming to Lawrence and how it is applicable to the kind of education he seeks to provide to Lawrentians.

Smith and Corry were welcomed to the stage with a resounding round of applause. Corry opened up the interview with a question about Smith’s experience growing up in Appleton. Although his family moved around frequently, Smith said, he has always considered Appleton his hometown.

“We moved here when I was in the eighth grade,” Smith said. “The three years that I spent at Appleton West really shaped my entire future.” Smith remarked on the major changes Appleton has undergone in his time away from the town and added that he still reads the Post-Crescent a few times a week. “It’s just so gratifying to see how well things are going, and it’s good to be back.”

Corry’s questions turned to the topic of Smith’s book. “The book is really about the collision between technology and society,” Smith said. He added that most of us are not especially well-educated on the issues of technology or government, but we are all affected by both. Smith explained that our current technology is largely a result of decades of work by engineers and computer scientists, but the future of technology will be much more multidisciplinary.

According to Smith, “All of us who are alive today are the first generation of people that are creating machines with the power to make decisions that were previously only made by people.” Therefore, one of the most fundamental questions we have to ask is how these machines will make these decisions. The answer to this requires an interdisciplinary approach, Smith said.

In talking about artificial intelligence (AI), Smith explained that AI is driven entirely by data and in that way, data has become the oil of the 21st century. “I have never met the developer of an AI app or system who says that they have enough data,” said Smith. “They always want more data.”

This brings up the question of who is going to benefit from all of the economic power of data in the coming decades. According to Smith, the power is likely to be concentrated in areas like Silicon Valley and parts of the east coast of China. “That’s not a future we should get excited about,” said Smith. “We need to spread the power of data more broadly.”

In the question and answer portion of the event, an audience member asked Smith his perspective on how to get underrepresented groups to be part of the “digital age.”

“What we’re finding in the country today,” Smith responded, “is that jobs that require digital skills pay better than other jobs, and when we look at the data about who is acquiring these skills, what you see is that it’s a group that is more white, more male, more affluent and more urban than the nation as a whole.” Smith said that the first step is to get coding and computer science classes into every high school in the U.S., which is something Microsoft has been working on with their program Technology, Education and Literacy in Schools (TEALS), which is now in 500 high schools throughout the country.

Smith offered advice to Lawrence students seeking a career in the computer sciences or other fields. “One thing I’ve always found among people who are truly successful is a huge sense of curiosity,” said Smith. “People do well when they ask lots of questions, when they’re interested in lots of things and when they’re prepared to start asking questions not knowing entirely where the answers may lead. That kind of curiosity doesn’t end when you graduate from college, and people should start pursuing it.

“The second thing I would say is that people benefit when they have the courage to push the edges of the envelope a little bit,” he said. “Don’t be bashful about pushing to do what you want to do. Be thoughtful, be respectful, listen to other people, but at the end of the day, make sure your voice is heard too.”