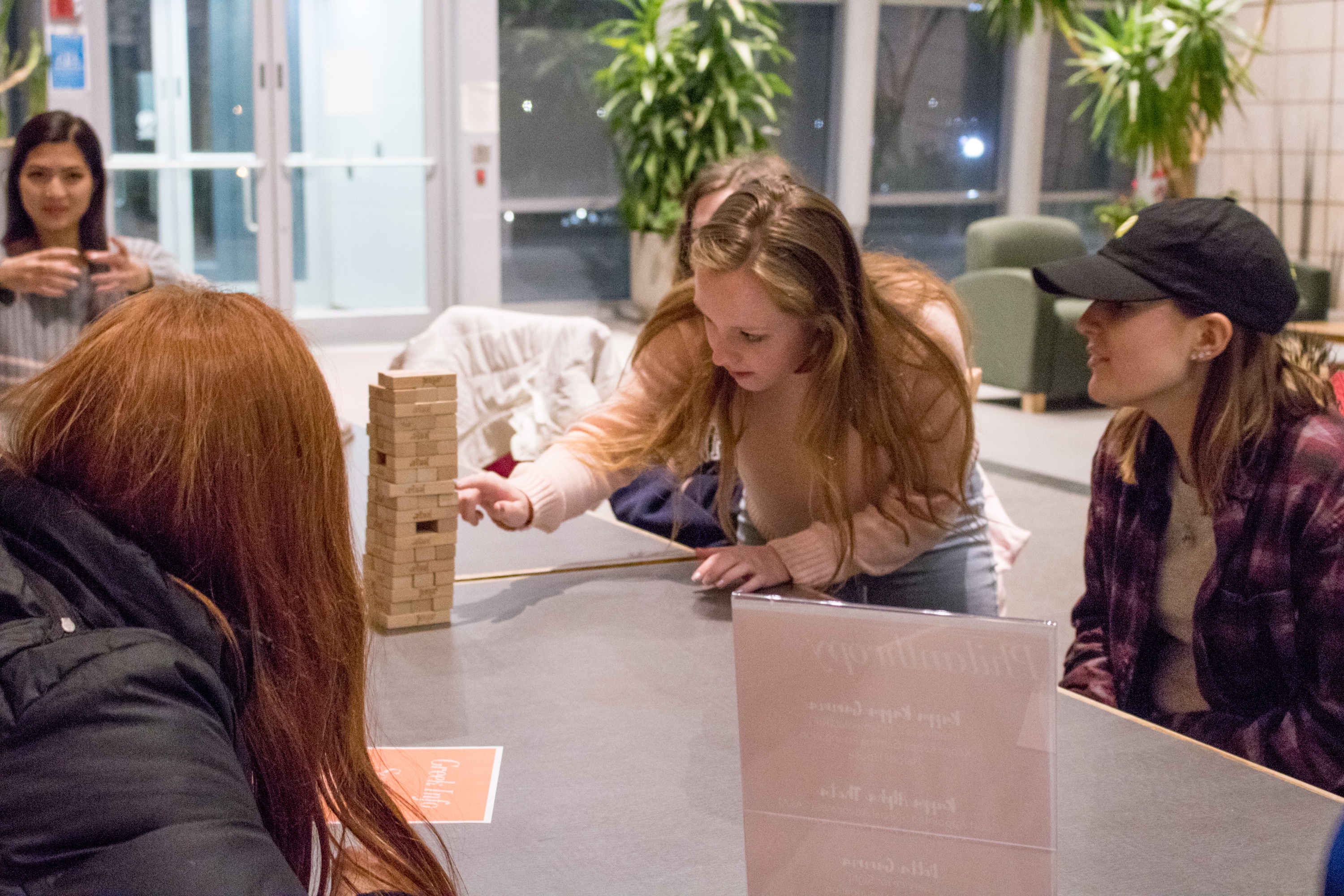 During this past week, many female students have been participating in Primary Recruitment with the intent to join one of Lawrence’s three Panhellenic sororities. The process began on Sunday, Jan. 12, and will conclude today, Friday, Jan. 17.

The Panhellenic Council is the governing body of the Panhellenic sororities on campus: Kappa Alpha Theta, Kappa Kappa Gamma and Delta Gamma. These sororities were founded on the principles of integrity, intellectual development, philanthropy and life bonds of friendship.

Although Sigma Alpha Iota and Beta Psi Nu are not Panhellenic sororities, they are still included in events throughout Greek Week, which takes place in Spring Term. These two sororities were not part of the recruitment process that occurred this past week.

Unlike most universities, Lawrence hosts recruitment during Winter Term. Although having recruitment later in the year causes the number of participants to generally be fewer, there are certain advantages to the later recruitment.

According to the Vice President of External Recruitment for the Panhellenic Council, senior Madeleine Stevenson, the delayed recruitment allows women the opportunity to “fully adjust to life on a college campus and figure out themselves and their schedules before committing to such a big time commitment.”

Although it has been proposed that moving recruitment to Fall Term may increase participation in Greek life, there are some drawbacks. Sophomore Morgan Fisher likes that recruitment occurs during Winter Term because it allows the sororities to be more dynamic and less homogenous since people know other students from outside of their chapter. Fisher also pointed out that it makes the recruitment process less intimidating.

The first round of primary recruitment took place on the second floor of the Warch Campus Center on Sunday afternoon. This round provides interested women the opportunity to meet and socialize with the different sororities on campus.

The second round of primary recruitment is the most casual round and provides women the chance to learn more about the philanthropies of each sorority. Prospective members learned about the core values of each chapter on Monday this past week.

Each sorority has a specific philanthropy that it is dedicated to, and because philanthropy and academic excellence are the main focuses of the Lawrence sororities, these are an incredibly important aspect of Greek life on campus.

The Kappa Alpha Theta Alpha Psi chapter supports Court Appointed Special Advocates, which is an organization that supports neglected and abused children as well as those in the foster-care system by pairing them with a court-appointed advocate. Members of Kappa Alpha Theta also volunteer across the Appleton area and throughout campus.

On Tuesday, prospective members were encouraged to attend an informal event in order to view the chapter rooms that are located in the Panhellenic wing of Colman Hall. This provided them with the chance to go into the different rooms where the chapter meetings take place and talk in a very informal setting.

The third round of primary recruitment occurred on Wednesday and is known as Decision Day. This is the most formal round and provides women with the chance to experience what being in the chapter would be like by experiencing a small ritual.

On Decision Day, the women put bids in for the chapter they want to be a part of by ranking their preferences. They sign a Membership Recruitment Acceptance Binding Agreement, but the recruitment process is still not complete.

Because the objective of recruitment is to ensure that each prospective member finds the right fit where they will be happiest, bidding is a mutual decision between the prospective member and the sorority. The new members of each chapter found out what chapter they were matched with on Thursday. Other members of each sorority have to wait until Bid Night, Friday, to find out what chapter the women chose.

On Bid Night, another secret is also revealed. Those who coordinate recruitment and act as recruitment counselors — members of the Panhellenic Council as well as two women from each chapter — remain anonymous in terms of which chapter they belong to.

This anonymity is used to eliminate the possibility of bias. The intention of recruitment is to encourage participation in Greek life, not one specific chapter. Bid Night is when the recruitment counselors are able to finally reveal their chapter.

A couple weeks after recruitment has taken place, new members of each chapter will be paired with their Bigs who act as their mentors in the sorority. Initiation typically does not occur until later in Spring Term.

For those who may be interested in joining a sorority but did not complete recruitment, there is still a possibility to be recruited. Because each chapter needs to have the exact same number of members, there is Continuous Open Bidding in order to reach that balance.

Continuous Open Bidding is a much less formal recruitment process, which generally occurs during Winter Term. In order to be included in Continuous Open Bidding, it is encouraged to reach out to at least one of the sororities so that they are aware you are interested. Contacts for each sorority can be found on the Lawrence University website under the directory of student organizations.

Freshman Alex Freeman playing Jenga at a sorority informational session held in the Steitz Atrium. Photo by Larissa Davis. During this past week, many female students have been participating in Primary Recruitment with the intent to join one of Lawrence’s three Panhellenic sororities. The process began on Sunday, Jan. 12, and will conclude today, Friday,…