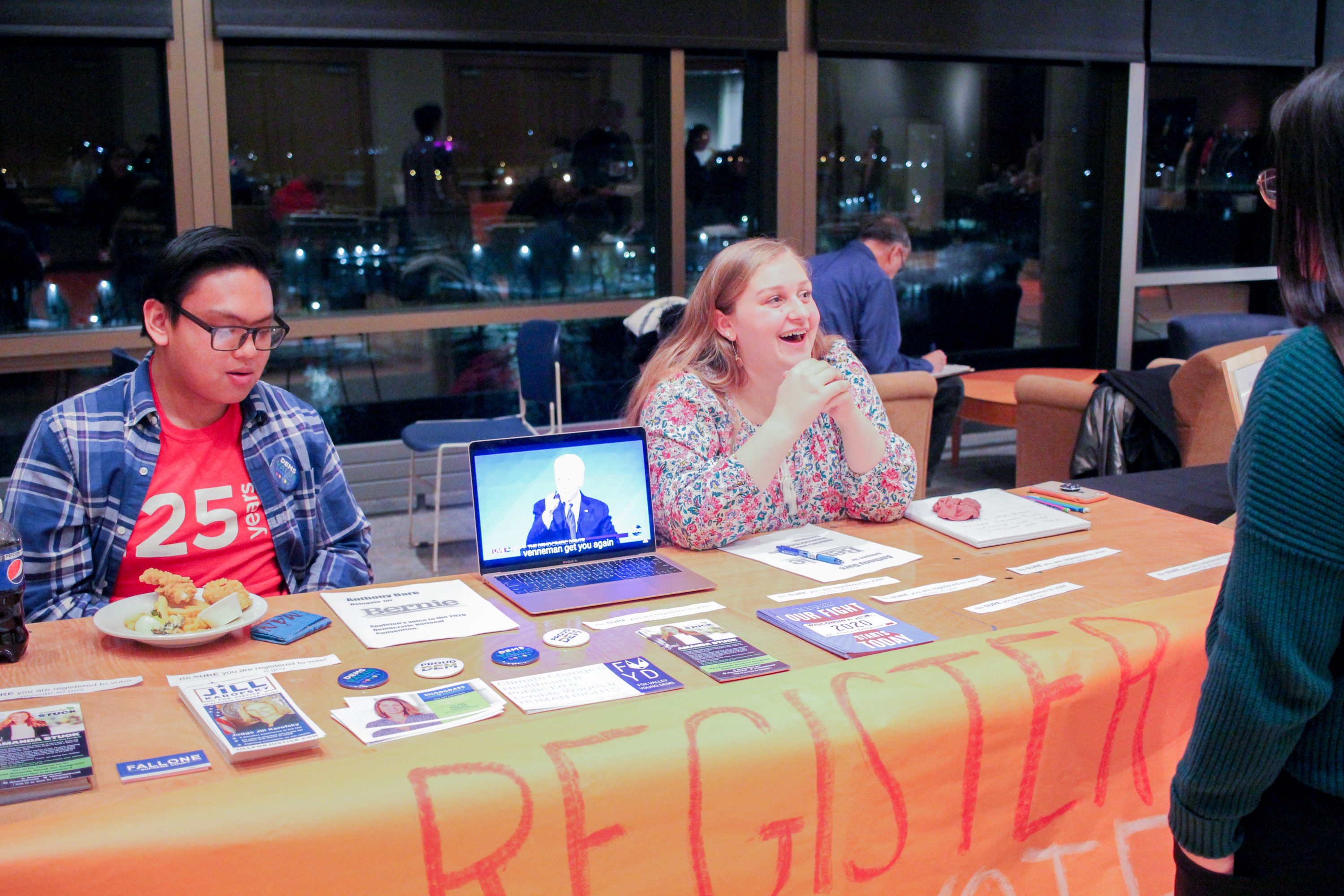 One booth had information on voter registration to encourage participation in upcoming elections.

On Friday, Feb. 7, Lawrence’s first Climate Action Festival was held in the Somerset Room of the Warch Campus Center. The event featured tables with information on climate change and concrete action that regular people can take to make a difference.

Last term, seniors Elizabeth Bridgwater and Christina Sedall came up with the idea to host a climate event that would focus on environmental justice issues and make the topic of climate change action less overwhelming.

“We were interested in the idea that organizing around the climate crisis could be social and action-oriented and that it should incorporate environmental justice issues,” said Bridgwater. “We both felt that an event of this format was most likely to help people build connections with each other, and we believe that these people-to-people connections are vital for addressing the climate crisis.”

The festival had multiple booths with activities attendees could do to take action. “We wanted people to produce some action: writing the postcards to Wisconsin voters,” said Sedall. “We wanted people to connect with orgs on campus: Greenfire, Sunrise Movement, Lawrence University Native Americans (LUNA). We wanted there to be education: mini library from the Mudd, Lawrence University NA, LU Dems register to vote, Divestment booth. We wanted there to be reflection and connection: art and journaling table. To show this is a justice and humanitarian issue: LUNA and donations to Puerto Rico.”

During the event, sophomore Meralis Álvarez spoke about the 2017 Hurricane Maria and the recent earthquakes that have devastated the island of Puerto Rico, as well as how the U.S. government failed to provide relief to the people of Puerto Rico. Álvarez also pointed out that events such as the hurricane are occurring more frequently as we begin to see the consequences of human actions.

Álvarez, senior Jessenia Zelaya Francisco and sophomore Kelly Vences have been organizing relief efforts for Puerto Rico. Students should be on the lookout for more student organization events around campus to raise funds for Puerto Rico.

Álvarez offered advice for students interested in helping with relief efforts: “Donating to grassroots organizations like Colectivo Umoja is the best way! There are many more like Brigadia  Solidaria and Rayo de Luna (these were grassroots orgs that helped during Hurricane Maria and are most likely still in need of donations and supplies from the aftermath of the hurricane—  yes even two years later and we still are dealing with the effects of the hurricane — and the earthquakes.) I would suggest that students look them up online! I would also encourage students to stay away from donating to large organizations like the Red Cross or UNICEF because the money they donate is often used to cover costs of operation instead of helping the people of P.R. Another thing is that in order to help the people of Puerto Rico in the best way, we must do a better job educating ourselves — and so I would recommend that they speak to our GOVT dept on the political situation in P.R. to understand why federal relief hasn’t been received; citizenship, economic things etc.”

“We had Nola Adé and her band come and play because the climate crisis doesn’t have to be something reserved for lecture halls and the news,” said Sedall. “It can be something we tackle in social settings. In fact, it has to be. This must be collective action. And we collect around dance, music, art and food. Her music is so positive, it was perfect to have that kind of love and energy.”

According to Bridgwater and Sedall, there are many actions people can take if they are interested in getting involved. One of the ways to be involved is to search for and connect with organizations in the community, such as groups regarding fair housing, homelessness, religious groups, identity driven groups, cultural organizations or anything else. “Engage with whatever is your interest and figure out how the climate crisis affects that community/group. Integrate that into your meetings,” Sedall said.

“A huge thing I advocate for is that people join a grassroots group or political movement that reflects their values!” Added Bridgwater. “An organization I think is doing especially compelling work is Sunrise Movement, which is a youth-led movement to stop climate change and win a Green New Deal. Students can get involved with the Sunrise Movement through the Greenfire club at Lawrence — currently, a group of people within Greenfire are organizing a massive climate strike for Earth Day and will challenge local politicians to support the Green New Deal.”

A major theme of the event was that those who have privilege should use it to help those with less in the coming changes the world will be facing with the climate crisis.