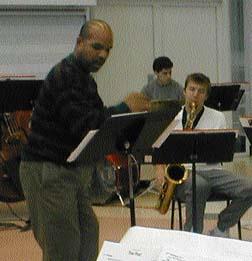 Don’t be surprised if you hear some really great music coming from the Jazz Studies department here at Lawrence this year, because there are some new faces in the department that are looking to take things up a notch. One of those faces belongs to Jose L. Encarnacion, a well-established Puerto Rican jazz saxophonist, clarinetist, and flutist. Encarnacion ‘s official title at Lawrence is the Minority pre-doctoral fellow in music. His resume reads like a “Who’s Who” in Latin Jazz and I recently got to spend some time asking him questions about his experiences, influences, interests, and goals for his work at Lawrence.

Encarnacion was born in Rio Pedras, Puerto Rico, where he grew up listening to and playing music in the folkloric tradition of Puerto Rico called Bomba. He played first in a group called Tierra Negra, and then turned to salsa music, playing with the likes of Roberto Roena and the famous Cepeda family.

He was first introduced to jazz when he was in the ninth grade. “My big influences were John Coltrane and Dexter Gordon,” says Encarnacion of his early experiences with jazz. He eventually devoted all of his studies to jazz and improvisational music at the Free School of Music in San Juan, Puerto Rico.

He left Puerto Rico at age 19 to continue studying jazz at Berklee College of Music, where he would later receive his bachelor’s in jazz performance. After Berklee, Encarnacion spent a brief period in New York City for a while as a freelance musician, and then went back home to Puerto Rico, where he played mostly salsa and Latin jazz.

About ten years later, he decided to pursue his master’s degree at the Eastman School of Music in Rochester, NY. It was during his time at Eastman that he met Lawrence’s other new face to the jazz department, Fred Sturm. Sturm would eventually become Encarnacion ‘s adviser for his master’s degree.

“I have a lot of respect for Fred… he is amazing… a super teacher and amazing composer and arranger,” were just some of the words Encarnacion had to offer about Sturm. He added that he particularly admires Sturm’s ability to interact well with students as a real human being, and connect with them. Sturm and Encarnacion became good friends; it was through Sturm that Jose learned of the job opening here at LU.

After he met the LU administration and went through the initial interview process, Jose became quite enthusiastic about the prospect of coming to Lawrence. When he learned that he had received the position at LU, he said, “I was happy… I knew right away that it was going to be a great experience for me. I could tell that the students were eager to learn, and also that I would be able to learn and grow as a musician from my interaction with the students and particularly the professors.”

Now that the year has gotten into full swing, Encarnacion says he plans to focus on helping his students to improve their improvisational skills and to become familiar with other musical traditions. He encourages his students to approach every style with the question, “How can I use it in my improvisation?” He added that learning to improvise is a lifelong process: “I’m still learning too, you know.”

When asked if he had a particular piece or recording or even a single style of music that he absolutely could not live without, Encarnacion said, “Music is music; I love everything… I just try to see what I can do with every situation that I encounter.”

Encarnacion has certainly done just that. He has been widely recorded in styles from Puerto Rican folkloric music to salsa, jazz, latin jazz and more. Of all of his recordings, Encarnacion says his work with the Domingo Quiones and Umberto Santa Rosa are best representative of his salsa work, while his work with Umberto Ramirez is a good example of his latin jazz records. For some more traditional jazz from Encarnacion, look for his Dave Rivello Big Band recordings.