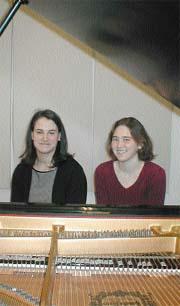 Scores of Lawrence conservatory students perform concerti every year. For performance majors, it’s a given part of their education to perform music with orchestral accompaniment. With the constant availability of musicians with concerti under their fingers, the demand for orchestras will never match the supply. Few people ever get the chance to perform their concerti with a full orchestra. That’s what the Lawrence Symphony Orchestra Concerto Competition is all about.

Last Saturday, in the early afternoon, a small band of anxious students gathered around an empty spot on the Lawrence Symphony Orchestra bulletin board. Within minutes, the empty spot was replaced by the announcement that Hillary Nordwell, piano and Nicole Messier, soprano, had won the 2002-2003 LSO Concerto Competition.

The Nov. 23 orchestra concert will present Nordwell and her interpretation of Mozart’s Piano Concerto no. 12 in A Major. Nordwell began working on the piece when she was in Vienna last term, which she found exciting because Mozart wrote and performed the concerto in Vienna. The original accompaniment was for either small orchestra or string quartet, which shows the intimate quality of the piece. “It’s got a chamber feel to it.”

Nordwell, a senior who also performs in countless chamber ensembles, will move from the center of the orchestra, where she plays with the LSO as a violist, to front and center. “It will be very exciting to work with the orchestra under Ms. Reischl in a different context,” she says.

Messier will be performing three arias from Antonin Dvorak’s opera Rusalka. Her performance on Jan. 25 will create a program that includes Johannes Brahms’s Fourth Symphony. The matchup is a great coincidence, as the two composers were great admirers and supporters of each other’s work, Brahms in particular of Dvorak.

Messier feels that the chance to perform with an orchestra is “a huge honor, because it’s a competition that singers generally don’t enter and win.” Messier, in her super senior year, learned two of the arias over the summer and decided to go for the competition in her last year here.

When asked what they would like those listening to their performances to hear, Nordwell responded that the Mozart “is just so charming, and I want to get that across.” Messier felt that the audience should get a sense of what the character is really feeling, even though the text is in Czech.

Both have come far and worked extremely hard to have a chance to perform with an orchestra. Best of luck to both, and for all the rest of us, sit back and enjoy.