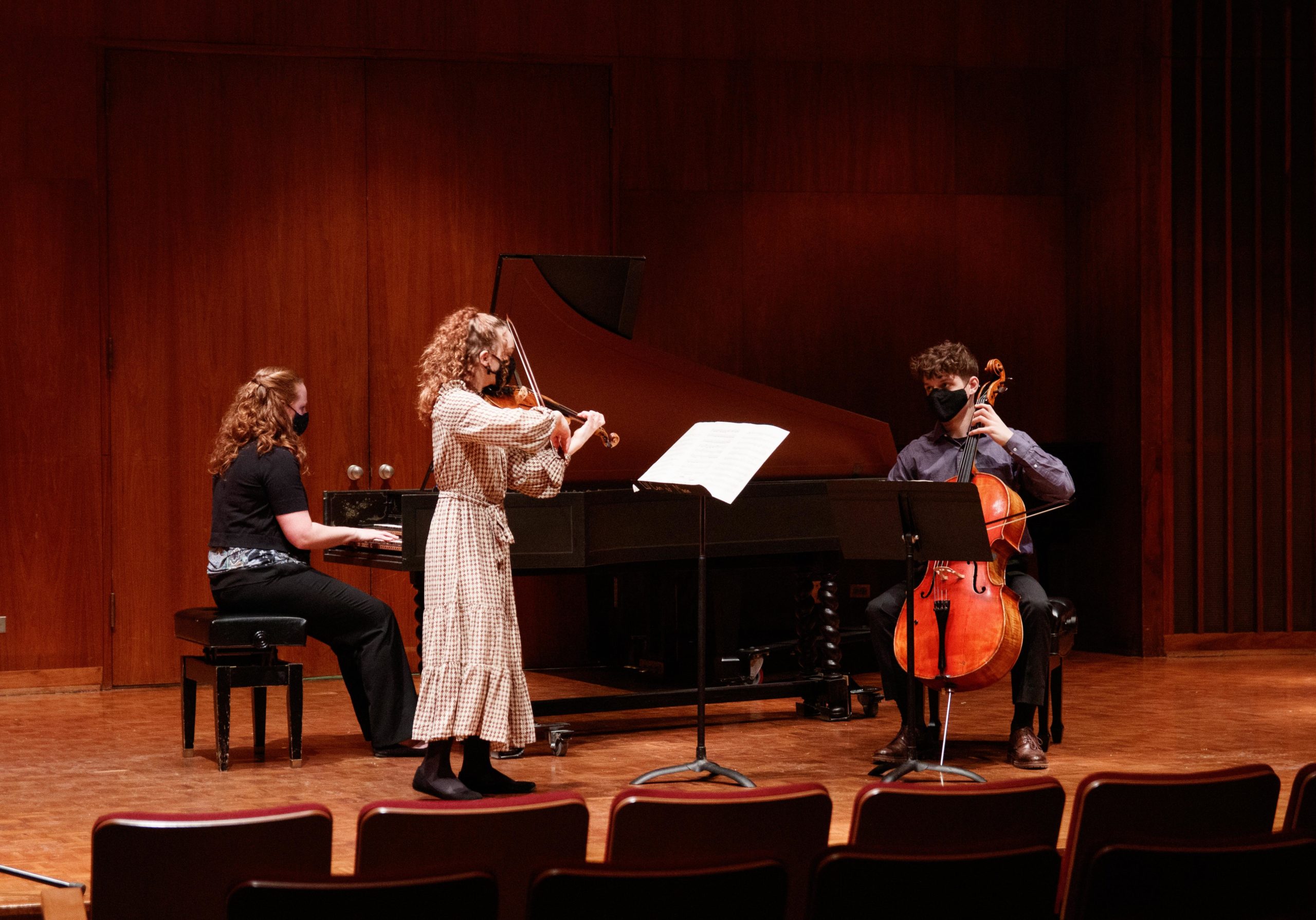 Beth Fryxell’s junior year violin recital was held on Saturday, Feb. 6 at 11 a.m. As well as being open to a very limited audience in Harper Hall, the recital was livestreamed. For the music performance major, students are required to give junior and senior recitals where they play pieces from a variety of time periods.

Fryxell needed to play a Baroque piece and a Romantic piece this year. So, the first piece was George Frideric Handel’s Sonata for Violin and Basso Continuo in A Major, HWV 361, op. 1, no. 3. She was accompanied by junior Alex Lewis on the cello, as well as Sarah Wheeler ‘06 on the harpsichord. After the piece, Fryxell explained that she and Lewis used baroque style bows, which are more slender than a regular bow, thus presenting a lighter sound to match the piece. On choosing this piece over others from the period, Fryxell says, “I played it in like seventh grade but really badly and not with any baroque stylistic choices, so my goal was to perform it more accurately to the time period.” She also took Early Music Revivals with Associate Professor of Music Sara Gross Ceballos, where she “revived” this piece. The playing was bright and quick as she moved her fingers deftly along the strings.

For the second piece of the program, the Romantic piece, Fryxell chose Three Romances for Violin and Piano, op. 22 by Clara Schumann, accompanied once again by Sarah Wheeler, this time on the piano. As the stage was set, Fryxell noted that Schumann was a legend of her time, only able to resume her piano career once her husband died and she needed to support her seven children. The piece itself was much different than the first, with longer musical phrases that felt much more emotional. Each movement was distinct, separated by a pause. One captivating thing about this performance was that Fryxell seemed to feel her playing throughout her whole body, which absolutely translated into the music and her performance.

The third and final piece of the program was a shorter one called Levee Dance op. 27, no. 4, by African-American composer, Clarence Cameron White. She was accompanied once more by Wheeler on piano. Originally, Fryxell played this piece in Associate Professor of Violin Samantha George’s violin studio. Each member of the studio recorded a piece by a BIPOC composer, and Fryxell was particularly drawn to this one after hearing it on a solo violin album by Rachel Barton Pine. In her introduction to the piece, Fryxell indicated that Cameron’s intention was to “promote African culture and spirit” through his work. She also pointed out that there was a quote from the spiritual “Go Down Moses” in the middle of the piece. It was a fluid and strong piece to round out the program with stronger bow strokes interspersed with plucking and swifter sections. By the end, she thanked the audience for coming and was handed flowers by her family for the great performance.