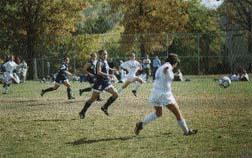 The women’s soccer team continued to excel from where they started last week. This time the victim was St. Norbert College.

A goal from Danata Janofsky, this week’s MWC Offensive Player of the Week, ensured a 1-0 victory against the Green Knights. After their first two Midwest Conference games, the Vikings are 2-0 against the title contenders.

To begin the game against St. Norbert, LU Coach Moira Ruhly started with Carissa Ford in goal. Ford made some amazing saves as St. Norbert piled on the pressure in the first 15 minutes. Captain Katie Wilkin, this week’s MWC Defensive Player of the Week, replaced Ford and continued the excellent performance in goal by keeping the slate clean.

The game was concentrated in the midfield and had a slow start, but it picked up as the LU forwards tried a few shots at goal. The teams battled to a scoreless first half.

The recess was good for the LU team; they piled more pressure on St. Norbert, and were awarded with a goal in the 68th minute. Sarah Slivankski and Greta Raaen assisted Janofsky to finish off a fine move.

The women from Lawrence hoped to find another goal, but were nearly punished in the 74th minute, when St. Norbert counterattacked.

With the goalie beaten, freshman Emily Cain headed the goal-bound effort out. The team defended well the rest of the way until the referee sounded the whistle to end the game.

This is LU’s second consecutive victory against the women from St. Norbert.

Next on the team’s schedule is a road trip to Knox and Grinnell this weeeknd.