Downer Commons to be converted to art gallery 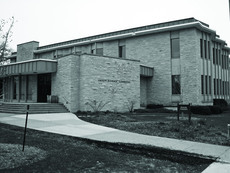 Downer Commons has been empty for the majority of this academic year. It will soon be housing a student art gallery
Katie Van Marter-Sanders

Downer Commons has been empty for the majority of this academic year. It will soon be housing a student art gallery (Lindsay Hayward)

For the rest of spring term, the former Jason Downer Commons will be used as a temporary art gallery for Lawrence student artwork.
The gallery’s opening will take place April 28 and will be celebrated with food and live musical performances. Jonathon Vanko, a freshman studio art major, spearheaded this project.
Vanko reported that his idea about a new use for Downer Commons stems from a conversation had at a Beta Theta Pi dinner. After discussing a piece of Vanko’s artwork then on display in the Warch Campus Center, he and his friends agreed that “there should be more places for student artwork to be on display” around Lawrence’s campus.
After this conversation, Vanko began thinking about places to display student art on campus. Vanko mentioned creating a gallery of student art in Downer Commons during his Introduction to Sculpture class and noted, “The idea… became a sort of joke among the class.”
Vanko decided to try to make the idea into a reality. First, Vanko sent a 17-page proposal to President Jill Beck’s office. Vanko and Beck met for about an hour, and Vanko was given the green light to present his proposal at a cabinet meeting.
After the cabinet’s approval, Associate Professor of Art Rob Neilson was appointed facility advisor while acting Associate Dean of Students Amy Uecke and Assistant Dean of Students for Campus Life Curt Lauderdale became the staff advisors on the project. During this time Vanko started walking through Downer, making exhibit plans with Dan Meyer, Lawrence’s director of facility services.
While the Lawrence administration supported the project, the Appleton Fire Department was concerned about the safety issues involved in housing an art gallery in the old dining hall. Inspectors initially worried about pieces of art violating the fire code and the need to establish safe and clear exits from the building. However, the fire chief walked through the building, heard about Vanko’s plans and gave Lawrence permission to open the art space.
With the gallery’s opening fast approaching, students interested in submitting artwork to be displayed in the former Downer Commons should pick up a form from the front desk of the Wriston Art Center.
The gallery also needs volunteers to help on opening day and throughout the term. Students interested in volunteering at the gallery should sign up through the Volunteer Center.
Now that Downer Commons is officially being converted from dining hall to art gallery, Vanko says that he is “busy like never before” but looking forward to offering students “a new place to display artwork” and “to experience the work of our peers.” Vanko hopes that the new art gallery will allow Lawrence students to be proud of and inspired by their peers’ artistic works.