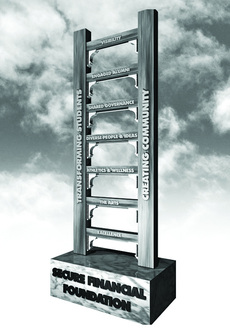 Lawrence University’s Strategic Planning Committee has gone public with its new goal of developing a collaboratively constructed strategic plan for the next ten years of life on the Lawrence campus. “Going public” is the motto of this committee, a group of people who bring diverse and unique perspectives to the table from their academic disciplines and occupations.
The committee is comprised of 16 members, including faculty members, administrators, trustees, alumni and students. The committee is co-chaired by Professor of Biology Beth De Stasio, and Dean of the Conservatory of Music Brian Pertl. The two student members on the committee are Eric Weinlander and Eric Murray.
For the past term, the committee has been reviewing the plan from 2005-2010, a “problem-oriented” document that found weak spots in the university’s system, to then create strategies that were intended to fix these problems. Unlike the 2005-2010 Strategic Plan, the 2010-2020 Strategic Plan will be based around goals and aspirations rather than problems.
This more optimistic approach to the planning process allows members of the Lawrence community to share their visions about what they would like Lawrence to look like for the next ten years without dwelling on the university’s shortcomings.
In order to learn about the visions and desires of the Lawrence community, the committee sent a survey to students, faculty, staff and representative alumni, inquiring about what they would like to see grow, change, or remain the same in the next ten years. There was a response rate of 20%, a solid starting point to begin organizing areas of focus.
This survey is one example of how the committee is striving to include the entire Lawrence community in the strategic planning process. Co-chair Beth De Stasio stated, “This is a transparent, inclusive, bottom up process. We want to hear from everybody.”
Another way that the committee is reaching out to the community is through their newly created blog, which can be found on the Lawrence website and can act as an interactive dialogue across the campus.
Eric Weinlander, one of the student members of the Strategic Planning Task Force, stressed the importance of the well-balanced composition of the committee, pointing to the comprehensive goals that have been gathered from surveys and discussions.
“It’s damaging to isolate the separate areas [of campus],” stated Weinlander. “This is about everybody who is a stakeholder in what Lawrence is.”
Some of the goal categories that have been laid on the table are community, wellness, athletics, academics, facilities, technology, diversity and sustainability. These categories are not final and are open for discussion, but are reflective of the results of the surveys conducted.
When the committee first experimented with the structure of the strategic plan, they drew a ladder. The two rails of the ladder represented the two ultimate goals of the campus: to transform students and to build community. As the committee develops more specific goals for Lawrence’s future, the members will incorporate the goals into a final image representative of the 2010-2020 Strategic Plan. The creation of the strategic plan for 2010-2020 includes everyone on campus and will be completed by the end of this term.