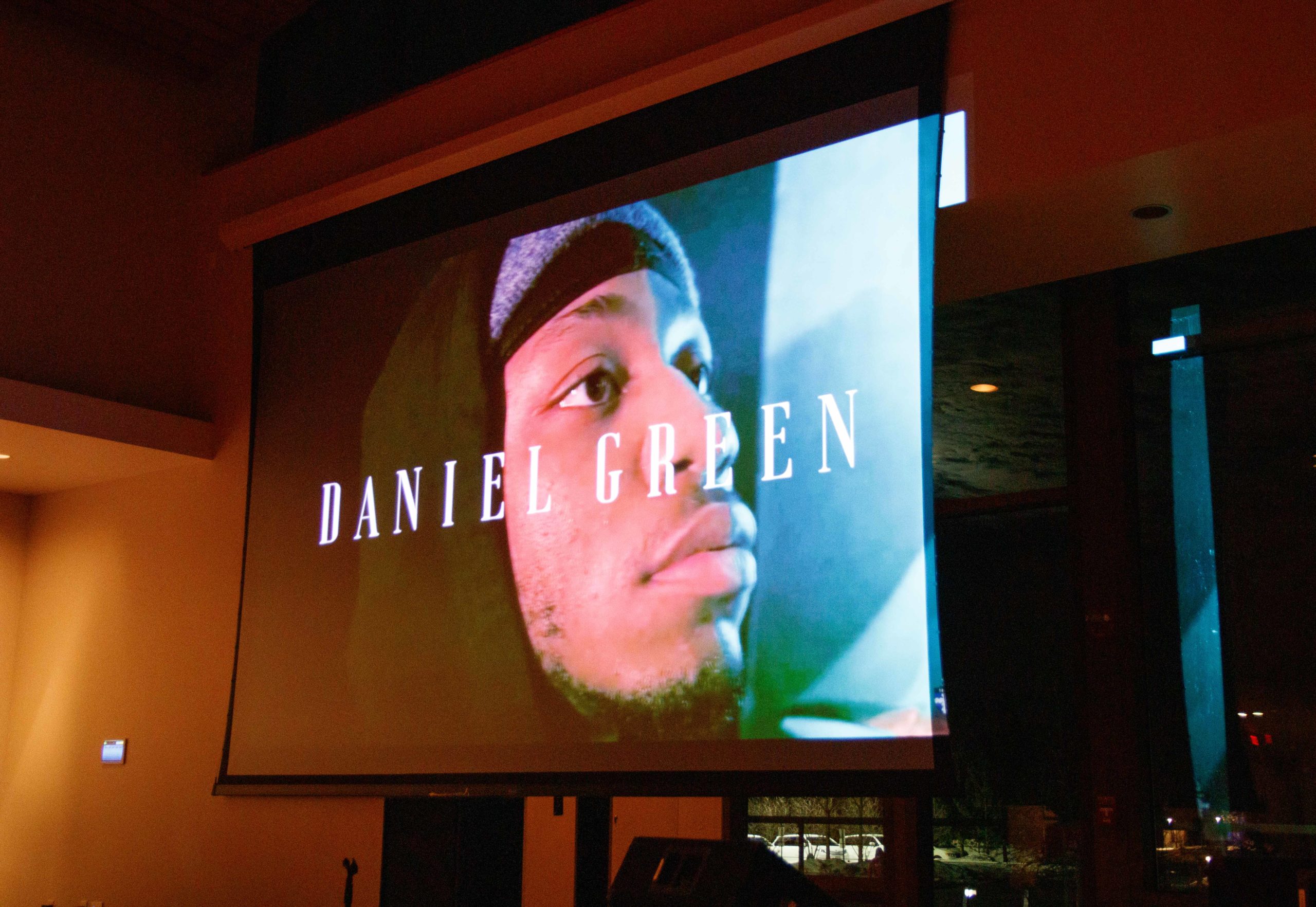 A group viewing session for the event was held in Somerset, projected here is fifth-year Daniel Green’s performance.

This year, the Black Student Union’s (BSU) annual production of Cultural Expressions for Black and Brown empowerment was themed “Black Love” and took place in a hybrid setting, streaming live on YouTube with a group viewing in Somerset on the evening of Saturday, Feb. 27. The full 2021 program is still available on the Lawrence University YouTube channel.

BSU President and Lawrence junior Sarah Navy facilitated the live in-person viewing, which opened with junior Hannah Jones’s powerful recorded rendition of “Lift Every Voice and Sing,” often recognized as “The Black National Anthem” since its creation by the National Association for the Advancement of Colored People (NAACP) leader, James Weldon Johnson, which was first performed in 1900. The program was hosted by senior Kye Harris and featured contributions from Lawrentians across a wide variety of artistic mediums and class years.

Among these student contributions were performances of original poetry, spoken word pieces, original songs and covers that showcased the participants’ talents and level of preparation for the event. Each entry aligned with the theme of “Black Love,” a topic explored by Harris and other participants throughout the exhibition. Performances were interspersed with student thoughts on the concept, connecting ideas of family, community, friendships, healing, acceptance and self-love in addition to the love of traditional romance. Many focused on Black Love as a total and complete knowledge and acceptance between loved ones, a theme exemplified in many of the students’ writing.

The first poem on the program was entitled “Intersection” by senior Janai Robbins. In this work, Robbins explores a feeling of tension between isolation and solidarity when she contemplates Black Love in the world today. First-year Monique Johnson also shared her thoughts on the topic through delivery of an original spoken word piece, in which she eloquently explored her relationship to the theme and contends, in her words, that Black Love has the ability to provide a driving “purpose from within.” Sophomore Savon Williams and junior Earl Simmons also performed a spoken word piece, theirs more idyllic, romantic and image-driven, recited by Williams and set to music with Simmons on the piano.

Finally, the program’s arsenal of vocalists included original songs by freshman Xavier Yon and fifth-year Daniel Green as well as beautiful and creative student covers of Chloe X Halle’s “Ungodly Hour” and “You Are So Beautiful” by Billy Preston. Yon, musically known as Norcom, performed a piece entitled “Human Life,” which grappled with the difficulties of embracing moments of joy and love during ongoing strife and violence. The Bailey sisters’ “Ungodly Hour” vocals were renewed here at Lawrence by sophomore/senior sibling duo Brittany and Meghan Hunter, adding a unique jazzy flair to the Grammy-nominated duo’s original version while costumed just as fashionably.

Harris closed the event to thunderous applause by reaffirming that the celebration could not have been possible without the tireless work of Navy and the rest of the BSU board members, including sophomores Savon Williams, Imani Williams, Tyler Antoine and Amaka Uduh. For Lawrentians who missed out on the event’s premiere last Saturday, the full recording is still available for streaming on the Lawrence University YouTube account for those wishing to catch up on the work of their talented classmates’ celebration of Black History Month.