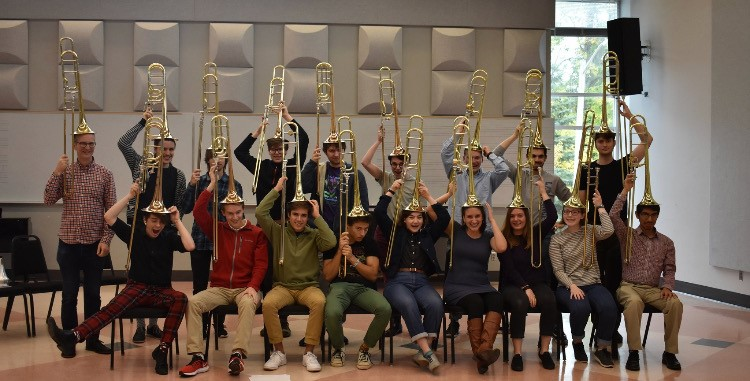 The trombone studio is working hard to stay connected despite the many changes that have occurred since the onset of the COVID-19 pandemic. I spoke to junior Mikayla Frank-Martin and sophomore Ryan Saladin about how the studio is promoting musicians and adapting due to the pandemic, and both emphasized the importance of social media in creating a space where Lawrence students can connect with and get to know members of the studio.

The trombone studio’s Instagram (@lawrencetrombones) and Facebook page (Lawrence University Trombone Studio) are used to create a space for the studio members to show their work and connect with other Lawrence students and the community as a whole. Saladin’s motivation for creating the Instagram was to highlight the “unique environment” of the studio which is untraditional in its diversity of musical expression. The studio is undivided between classical versus jazz players or between music majors versus non-music majors. Frank-Martin shared that, “We just wanted to create it so we could promote the studio and spread awareness of what we’re doing and promote certain people in our studio as well. We do studio member spotlights so then people can get to know and see what each member of the studio is doing.” The studio member spotlights demonstrate the work that students are doing not only within the studio, but as artists and students in general. Updates and links for performances are shared through social media as well, which is especially important as currently there’s a lack of in person performances.

Frank-Martin also highlighted the “tight knit community” of the studio, which feels incredibly important during the pandemic. The studio “often feels more like a group of friends,” according to Saladin. Tim Albright, assistant professor of music, is a helpful facilitator of the close community, and “really great about promoting community and addressing individual needs and supporting everyone,” as stated by Frank-Martin. Classes are currently in a hybrid setting, which is accessible for students who are off campus. They are held in person and through Zoom at the same time in order to accommodate every student. Frank-Martin noted that, “it feels like people who are off campus are a part of the studio,” due to the dedicated and innovative work of Tim Albright and the supportive student community, and the studio feels like “a big family” which focuses on supporting each other’s needs and growth rather than competition. It’s is an encouraging space even for non-majors, since everyone has “respect for each other as musicians.” According to Frank-Martin, the studio’s primary focus is becoming “the best musicians we can be.”

There are multiple upcoming student recitals and projects to look forward to this term. On April 16, Daniel Johnson will release a single titled “Mighty Sketch,” and the full album, Childhood Sketches, will also be available on Spotify on May 28. Frank-Martin and Jacob Dikelsky are performing a joint junior recital at 8pm on April 16, and on April 18 Omar Tlatelpa-Nieto’s junior recital will be performed at 8pm. On April 24, Nathan Graff will perform his junior recital, and Allie Goldman will release the first episode of her senior recital podcast. The recitals can be accessed at https://livestream.com/lawrenceuniversity.