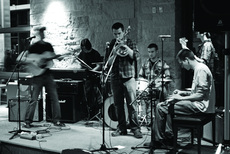 Where were you Saturday April 5? If you did not go to the café, then you missed out on another great concert that Lawrence’s Band Booking Committee has put together this year. The Daredevil Christopher Wright, a band from Eau Claire, has played a show at Lawrence every year since my freshman year, and they never cease to amaze.
The opening band, The Gentle Guest, also from Eau Claire and on Amble Down Records, started the night off with some captivating songs that are very difficult to place into a specific genre. Their music can be described in terms ranging from Americana to – as the band said – punk. The Gentle Guest’s 50-minute set contained songs from their 2008 album “We Are Bound To Save Some Souls Tonight” as well as several tracks from their new album, set to be released this summer.
The way Erik Rykal, the lead singer of the band, interacted with the audience was also noteworthy. Near the end of the set, he led a successful sing-along, claiming that he would wait up to an hour for the audience to get the words right. The audience was clearly enthralled, as the majority of the people in the cafe sang along. It is always impressive when a band gets people to sing along with a song they do not know.
As The Daredevil Christopher Wright took the stage just after 10, the audience moved forward. The band opened with a theme song of sorts, also called “The Daredevil Christopher Wright,” which tells the story of the death of a risk-taker. After the song, the band asked the audience if they were ready to hear more songs concerning death. The lead singer, Jon Sunde, explained that they write songs of this nature because of their comfortable middle-class childhoods. Death was all that they felt they could worry about.
Songs like “The Daredevil Christopher Wright” really showcase the talent of this band on the rise. Although the band only contains three members, the harmonies of the three are simply stellar. Each member could be the lead singer of the band, or any other band, for that matter. Like the more popular Fleet Foxes, many of Daredevil’s songs contain sections of purely vocal harmonies. These vocal harmonies, most notably on the song “Isn’t It Enough?” make the music fan wonder: Why haven’t these guys gotten more recognition?
One thing you can tell while watching Daredevil play live is that the guys have great chemistry. They constantly switch instruments, and although Sunde seems to be the lead member of the band, each of the three members gets a chance to sing and carry a song, whether on acoustic guitar, electric guitar, bass, drums or xylophone.
Hopefully Lawrence can keep the Daredevil tradition alive next year and bring this great band back to campus. It was entirely clear in watching the reaction of the audience that Lawrence students – and the non-Lawrence Appleton community – have a great appreciation for the band. The majority of the crowd sang along to nearly every song, making for a truly special concert experience.
Band Booking Committee’s next concert will be May 22 in the café and will feature Voxtrot, a rock band from Austin, Texas.