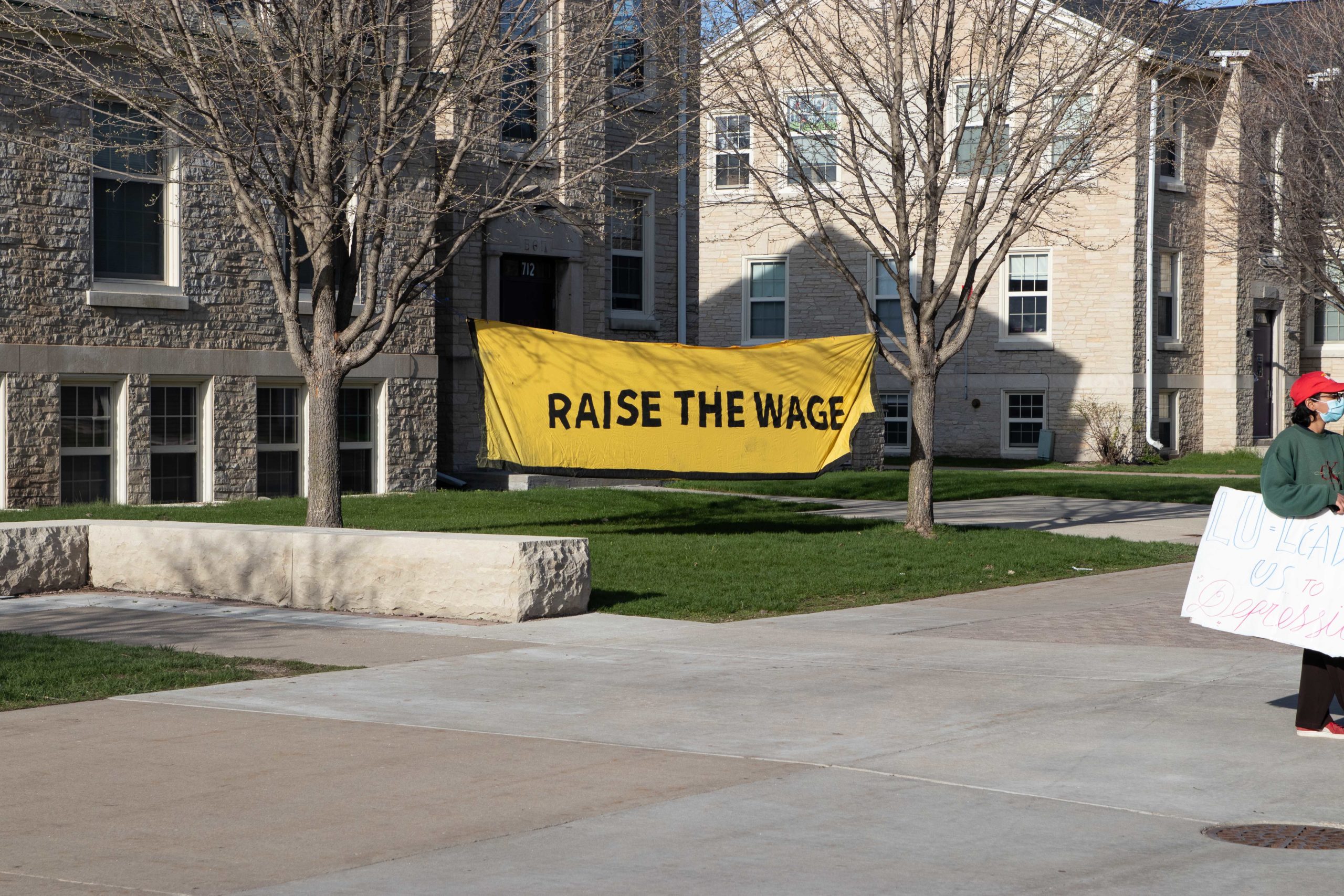 A “Raise the Wage” sign displayed across from Warch Campus Center. Photo by Sarah Navy.

A Student Worker Demonstration “Pay Us 15!” was held by Student Liberation Front (SLF), Sunrise Appleton and Students for a Democratic Society (SDS) on April 16 from 5:30 to 6:30 p.m. near the Warch Campus Center. This event called for the Lawrence administration to increase student workers’ minimum wage to $15 per hour to respond to students’ financial difficulties, including their tuition fees alongside their academic life.

About 30 students attended the protest. Organizers of the event put out signs including “Wage Increase Now” and “Raise the Wage” to express their demands. They also distributed fliers regarding the demonstration to students who walked by and asked if they had signed the electronic petition form in support of raising students’ minimum wage.

The idea for this demonstration came about when SDS reached out to Junior Barrah Shamoon, the organizer of the “Pay Us 15” initiatives, about campaigning around this movement to demand the administration raise student minimum wage, according to Junior Terrance Freeman, Co-founder of SDS. After contacting SLF and Sunrise Appleton, the three organizations decided to hold the demonstration together.

During the event, students including Shamoon, Freeman, sophomore Gustavo Zuniga, the Founder of SLF, and freshman Anders Hanhan, the Hub Coordinator of Sunrise Appleton, made speeches. Shamoon recalled returning to her hometown in Pakistan during her sophomore year to introduce Lawrence University to high school students in her community as a student ambassador while struggling financially.

“I really should have said ‘don’t come here,’” Shamoon said.

During his speech, Freeman stressed the essential function of student workers on campus and the importance of a minimum wage increase for the well-being of students, including those who come from low socioeconomic backgrounds and must seek off-campus jobs, which compounds the stress from academics and extracurriculars. Those jobs drain students, Freeman said, and diminishes their ability to function as students.

“We need to raise the student minimum wage, and we have to raise it to $15,” Freeman said. “We can’t wait that long [for the administration to raise the wage $1 per year] because there are students on this campus who need that money now.”

After Freeman, Zuniga spoke, arguing a student minimum wage raise would encourage students to apply for on-campus jobs and spread out the workload among students, therefore fulfilling the job demands while ensuring the stresses from occupations are not overwhelming.

In addition, Hanhan said in the protest that a $15 hourly wage is only a bare minimum wage to survive in the Appleton Community. College students should not pay their debt for their higher education during their whole lifetime, Hanhan said.

According to Hanhan, Sunrise Appleton endorsed the demonstration and thinks a $15 minimum wage on campus is just a starting point for raising student income.

The demonstration went better than Shamoon had expected. She believes students were well engaged with the speakers at the event, and she thinks the event opens the possibility for future actions. According to Shamoon, the initiative group plans to approach  LUCC and eventually meet with the administration.

“We don’t expect to solve this issue immediately,” Freeman said. “The event’s purpose is to inform the students about this movement, raise the awareness and give them contact or knowledge.”

Shamoon decided to address the issue of raising the minimum wage on campus after repeatedly being denied the financial aid she needed due to Lawrence having insufficient funds for international students. The movement has been something Shamoon has wanted to initiate since she began working in the Fall Term of her freshman year but never had the time.

“To be honest, I still don’t have the time to lead this movement and am only doing it due to personal economic stressors, since I’m at the end of my rope trying to survive in the U.S.,” Shamoon said.

As the event came to an end, Shamoon encouraged students to acknowledge and support this continuous movement.

“Listen, even if you feel okay economically,” Shamoon said, “Listen to who is on the line of poverty. It is important that we express our demand and negotiate with the administration… So please, try to listen to our voice.”