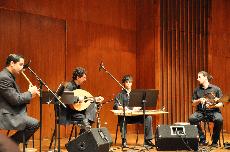 Harper Hall was almost full five minutes before the start of the Near Eastern Music Ensemble’s Monday night concert. As I finally found an open seat in the front row, I thought about how strange it was to see Harper Hall full.
Many performers have trouble filling a third of the theatre, and I can only think of two other “sold out” Harper Hall performances – the Dobet Gnahore and Happy Apple concerts two years ago. Given Harper Hall’s mediocre attendance record, it was refreshing to see such a large turnout for the first installment in Lawrence’s World Music Series.
Before the concert started, Sonja Downing, Lawrence postdoctoral fellow in ethnomusicology, introduced the ensemble and spoke briefly about Near Eastern music.
She explained that unlike the Western tone system that divides the octave into 12 equal parts, the Arabic tone system divides the octave into 24 equal parts and allows Arabic musicians to use modes that are foreign to Western music. After these short and informative remarks, the ensemble took the stage.
Ensemble leader William Shaheen began the concert with a slow improvisation on the oud, a Near Eastern string instrument that looks a bit like a guitar. When the improvisation ended, the ensemble immediately began an upbeat song in 10/8 time, titled “Sama’I Bayati.” Afterwards, Shaheen introduced the musicians and their instruments.
He first introduced Michael Ibrahim, the ensemble’s ancient Arabic flute – or nay – player. Shaheen then introduced Ali Amr, the ensemble’s qanun player. The qanun is an ancient, trapezoidal instrument that has upwards of 70 strings stretched across its surface.
Shaheen briefly explained how to play the qanun – it is plucked with metal picks – and acknowledged the 18-year-old Amr.
Afterwards, Shaheen finally introduced the ensemble’s percussionist, Tareq Rantisi and his three instruments: an Arabic version of the tambourine called a riq, a frame drum and a hand drum called a doumbek.
After Shaheen’s introductions, the ensemble played a 1930s composition initially written for dancing, titled “Raqsit Badi’ah.” The composition began with an up-tempo melody, which the ensemble played in unison.
After finishing the melody, each musician played a solo. Shaheen played the first solo as he improvised over a quiet ostinato held by Amr and Rantisi. As Shaheen’s solo slowly became louder and faster, it showcased both his technique and his command of Arabic modes.
Like Shaheen’s solo, Amr’s solo was also terrific, mainly because it demonstrated the qanun’s full sonic potential. The qanun sounds a bit like a mix between a harp and a slide guitar, but even that comparison does not do the instrument justice. It has a very distinct sound, and it was fascinating to hear such a unique instrument in a solo context.
Rantisi took the last solo on the Arabic tambourine. He did not play especially fast, but he got a wide variety of sounds out of a very small instrument. Rantisi’s solo evoked memories of percussionist Glen Velez’s playing at the Trio Globo concert last year, so when my friend and I talked to Rantisi after the show, we were not surprised to hear him cite Velez as one of his idols.
The ensemble played for about an hour and a half, and the songs became even more impressive as the concert progressed. Each song featured numerous improvisations, and Shaheen did a wonderful job of explaining the historical and musical significance of each composition. I especially enjoyed his explanation of improvisation.
While I mostly listen to jazz, the Near Eastern Music Ensemble’s use of interesting sounds, modes, textures and rhythms convinced me that improvisation can be exciting and beautiful in other musical contexts. 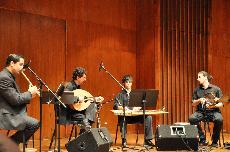