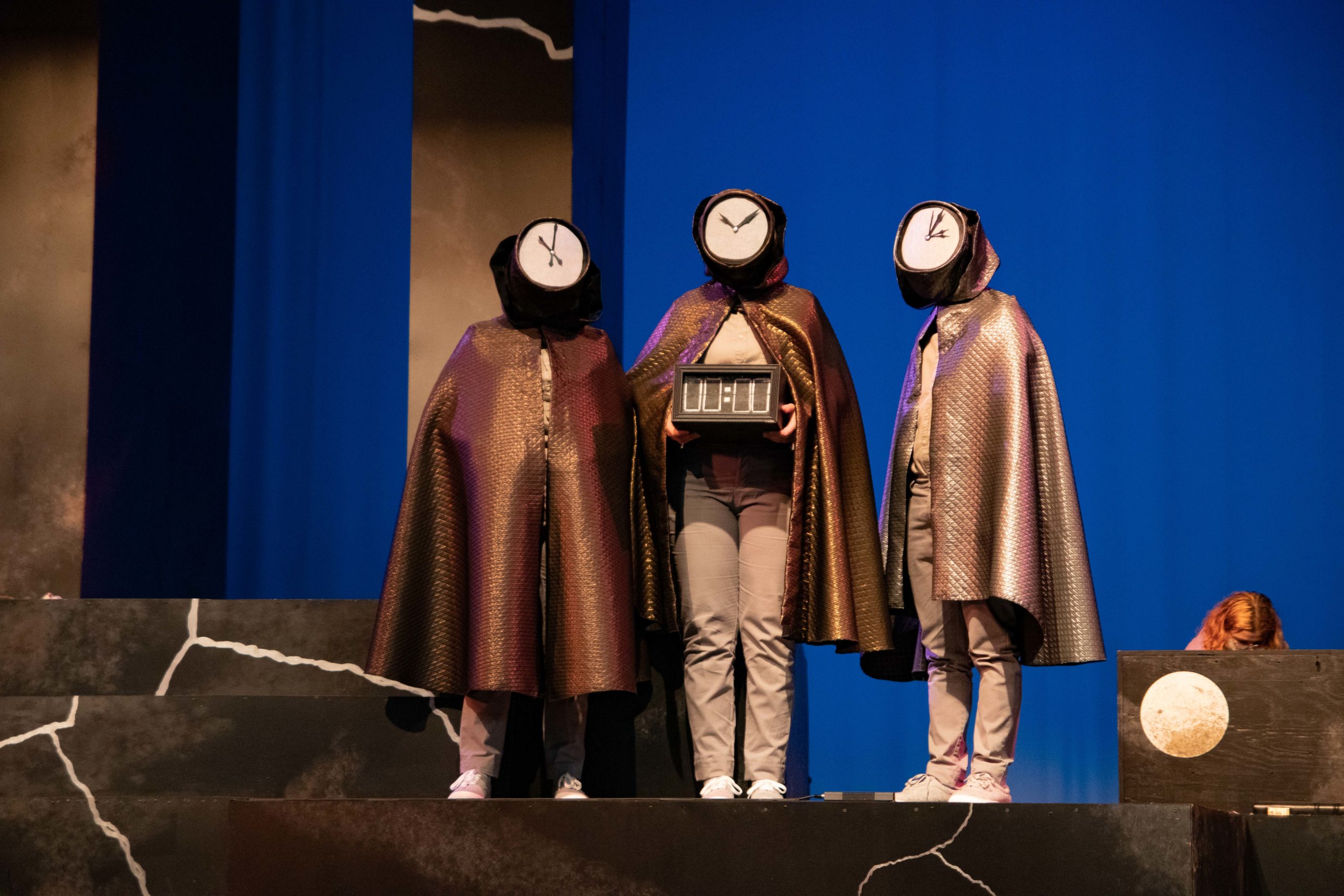 The Lawrence University Department of Theatre Arts performed The Domino Effect starting on Thursday, May 20. Photo by Alana Melvin.

This past weekend the Lawrence University Department of Theatre Arts performed their version of The Domino Effect, a play written by Fin Kennedy. The production was directed by Kathy Privatt and stage managed by junior Riley Seib.

The play, performed in the campus’ Stansbury Theater, is set in Hamlets, London, and follows the life of a girl named Amina who refuses to speak, played by senior Lexi Praxl and sophomore Frankie Sobel. Amina grows up with her mother, Nibijah, played by sophomore Madeline Guest, as well as her father, Samit, played by freshman Jon Winkler. Amina’s father is a clockmaker and struggles to keep the family financially afloat. In turn, Amina’s mother abandons the two to go work in America.

Exploring how one small action can lead to a series of unfortunate events, like a startled fox somehow causing a butcher to lose two of his fingers, The Domino Effect deals with themes of time, family and unintended consequences. In addition to well defined acting and narration, the production also showcased an impressive set featuring gigantic dominos and a video screen, designed by Aaron Sherkow. The costumes of the play, designed by Isabel Kelly, were mostly uniform and simplistic, but also utilized impressive and intricate fox and sheep costumes, as well as reflective capes. Movement was also an important aspect of the production, as the actors, all taking on roles of narrators, had to perfectly time their lines with their actions. In addition, detailed footwork lining up with video effects was a significant feature of the show.

Sobel, who plays Older Amina, as well as Narrator, Fox and Teacher, comments on the multiple roles the cast took on, saying, “I think that going from being a narrator to not being able to communicate through words was a really cool experience. I forgot how much I rely on words in my everyday life and to be able to let that go and just ‘be’ was really fun to explore on stage.”

The Domino Effect, featuring aspects of detail-oriented speaking and movement, was a show full of complex theatrical elements colliding together. Each performer carried an important and crucial role for the overall function of the play. Remarking on her favorite aspect of the production, Sobel says, “My absolute favorite thing about The Domino Effect was the ensemble element of the show. Being able to build off of friends on stage knowing that everyone has each other’s backs was amazing.”

Live theatre has obviously looked different this year than in years past. Luckily, the theatre department has been able to continue performances throughout this academic school year with radio shows during fall term, student-written plays in winter term and The Domino Effect this term. All performers were masked during the production and seating in the theatre was socially distanced. Sobel, a theatre major, mentions the challenges performers have faced this year due to the pandemic: “The biggest challenges related to COVID-19 are probably finding ways to navigate through a production in order to keep everyone safe. But to be completely honest, as this pandemic has gone on the easier it has been to make theatre and it is incredibly rewarding to be able to share stories with people,” Sobel states.

To summarize the meaning behind the performance, Privatt’s “Director’s Note,” written in the production’s program, states: “While choosing to tell this story here in Appleton, I took to heart Fin Kennedy’s words about his goals as a playwright: ‘I don’t try to tell people what to think, but I want to give a platform to people and themes that most of the public wouldn’t have access to.’”