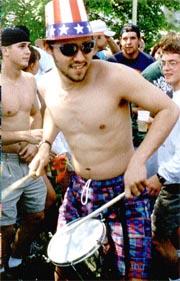 Local acts, such as the Sambistas and other student ensembles, have entertained the crowds of Celebrate! in the past.
Ceilidh Mar

Local acts, such as the Sambistas and other student ensembles, have entertained the crowds of Celebrate! in the past.

For the Lawrence student body, third term brings to mind a slew of springtime activities, from games of Frisbee on Main Hall green to the infamous senior streak. One of the best-known events is Celebrate!, a Lawrence-sponsored festival designed to include all of Appleton. It has been called “Lawrence’s gift to the community.” For the event, the quiet campus transforms into a bustling thoroughfare for craft vendors, performance-goers, and the occasional rowdy townsfolk looking for something to do. The founding concept was a renaissance festival designed as a senior honors project. Faculty and staff dressed in costumes and participated in games and events related to the era. There was even a game of human chess on Union Hill. The students who had helped plan this first festival loved the idea so much they formed committees to make the festival an annual event. During the next couple of years, Celebrate! evolved into its current state and gained its exclamatory title.

Celebrate! has always been a student-driven event. Soon after its conception, student enthusiasts formed the Subcommittee of Programs for Special Events. This group was involved in the planning of Celebrate! in addition to the Homecoming program and a winter ball. Eventually the planning fell to SOUP, which now assigns an independent planning committee to prepare for the large groups of people attending, to book groups, and to enlist student help for set-up and events.

During the nearly thirty years of Celebrate! the planning committee has made many changes to the event. One of the most recent changes was the decision four years ago not to allow the sale or consumption of liquor at the festival. Now other vendors fill the flattened grass spots where kegs used to stand. The vending fees provide a large percentage of the money used for the festival’s set-up and bookings, allowing for free admission to the festival and its performances.

This year’s performances and events will include a live band as well as a children’s area and craft and food vendors from all over the Fox Valley. The events are family-oriented and are meant to bring in parts of the Appleton Community that don’t typically have a chance to see the Lawrence campus. It also allows the groups and individuals involved to earn money or volunteer to help.

Because of College Avenue construction, one of the main planning concerns for Celebrate! this year was access to campus. Luckily, plans indicate that the area should be clear by early May.

Celebrate! will take place May 11 during mid-term reading period. Those students who don’t plan to avoid the crowds by hiding in their rooms should make sure to carry their star keys as the buildings will be locked to allow for privacy and prevent damage. Students are asked not to give the public access to the buildings. There is no fee for attending and performances will be going all day. If you are interested in volunteer or paid positions as an individual or group to help with set-up, publicity, security, crowd control, or other aspects of Celebrate! contact Megan Brown at X7566 or leave a message for the Student Committee for Celebrate! with student activities at the Memorial Union.