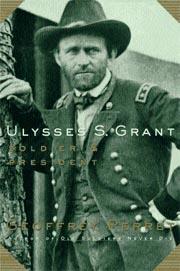 For decades, the historical consensus toward Ulysses S. Grant has been generally negative in many circles. Numerous scholars have dismissed him as an ineffectual president and a general who triumphed more from luck than military talent. In recent years, this traditional viewpoint is being challenged. One historian who attacks the standard opinion is Geoffrey Perret. In his book Ulysses S. Grant—Soldier and President, Perret provides a reevaluation of Grant’s life and career, coming down firmly on Grant’s side. This book was named as a New York Times Notable Book of the Year. Perret studied at Harvard and the University of California at Berkeley. He specializes in United States military history and has written eight other books on the topic.

Using a rather colloquial writing style, Perret depicts Grant’s colorful life, from his childhood years with his self-made entrepreneur father, moving on to his sometimes joyous, often frustrating years at West Point. The book gains momentum as Perret tells the story of the romance between Grant and his wife, Julia. Julia was the love of his life, often impractical, but always comforting.

Perret uses their relationship to separate the human side of Grant from the efficient military man. Some of the book’s funniest scenes come from the conflict between Grant and his irascible, bigoted, slave-owning father-in-law; a man who entitled himself with military honors he did not deserve and who was a staunch supporter of the Confederacy. As the book continues through the Civil War and Grant’s presidency, Perret increasingly paints Grant as a well-meaning, coolly capable man who was often thwarted by his more mediocre and shallow contemporaries.

Perret attacks the assertion that Grant was a third-rate military tactician by analyzing Grant’s Civil War battle plans and strategies positively. In addition, Perret disparages many of Grant’s fellow officers who spread slanderous rumors about the general out of ambition or sour grapes. Perret acknowledges that while Grant occasionally abused alcohol, he was not the constant dipsomaniac Grant’s detractors brand him. While many hold that Robert E. Lee was the superior fighter and the victim of unfortunate circumstances, Perret criticizes Lee’s motives and stratagems.

Perret’s strongest criticism of Lee appears in his summary of Lee’s long-inevitable and long-delayed surrender at Appomattox. Lee arrived dressed handsomely in a well tailored, polished uniform, and Grant entered dirty and disheveled from the journey. In Perret’s description, “The tall handsome man who looked like the conqueror (Lee) possessed the trappings of power as romance but was in fact impotent; the other man (Grant) possessed the romance of the real, the authentic, with mud on his boots and the crushing might of superior organization” (p. 359).

Perret creates a readable and informative biography of Grant. While historical assessment is never finished, Perret’s strongly written defense of Grant is a strong argument for the approval of the man. Ulysses S. Grant—Soldier and President is for those with an interest in the Civil War, U.S. history, or historical debate.

Chris Chan Geoffrey Perret&s book Ulysses S. Grant8212;Soldier and President challenges traditional criticisms of the eighteenth president&s personal and public life. For decades, the historical consensus toward Ulysses S. Grant has been generally negative in many circles. Numerous scholars have dismissed him as an ineffectual president and a general who triumphed more from luck than…