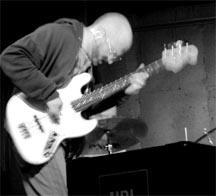 The Minneapolis/St. Paul based trio Happy Apple brought an exciting and fresh sound to the Underground Coffeehouse on Wednesday, April 3. The jazz/hip-hop/funk/drum & bass/jam group packed the coffeehouse with their anticipated return to Lawrence. Some may remember the performance last year on the same stage, which did not attract a large crowd because of the poor job advertising. Regardless to say, everyone not familiar with the trio was completely taken by surprise by the show. This time, Happy Apple played to an overcrowded coffeehouse, with people standing throughout the performance.The group’s concept cannot easily be placed in any one influence, or even several influences; instead, they draw upon a plethora of more general styles and include a lot of their own original concepts of music.

One influence which did seem to have a particular effect on their music was the free jazz style established mainly by Ornette Coleman in the 1960s. Coleman’s style seemed particularly evident in the saxophone player, Michael Lewis, who restricted himself only to what his horn was capable of playing. Another aspect of Lewis’s playing, which seemed particularly appealing, was the way he would think of a motive, and manipulate it and play with it in a variety of ways. It goes without saying that Lewis was not just some saxophone player improvising thoughtlessly, but instead, was a true musician who could come up with a creative idea in every musical situation.

The rhythm section, consisting of Erik Fratzke on bass and David King on drums and a variety of other percussion toys, did not just blend in the background behind Lewis, but were an equal part of the group. The interaction between the members of the trio was astounding; when one person would present an idea, the other members of the group would respond to that idea right away, building intensity and energy.

Fratzke began many of the tunes with very melodic bass lines, stuff that you would not hear in most other jazz or funk oriented groups. His playing was very unique, laying down a solid foundation in all sorts of time signatures (from simple four-four, to more complicated compound meters), while at the same time creating a melodic line that could be listened to on its own. His solos were also very well conceived and built upon—one really felt like he went somewhere with his ideas rather than a typical stagnant bass solo, common in many groups.

The drummer, King, was entirely absorbed in what he was doing the whole time on stage. He brought the music in many new directions that the listener would not even think possible. They might begin a tune in a straight-up funk groove, and King would go into a fast swing or hip-hop groove, or completely free up the time with tasteful chaotic drumming. Neither Lewis nor Fratzke were ever thrown by the directions he pursued, but they would often look on with happy surprise because of the ideas he came up with. Another aspect of his playing that was especially intriguing was his use of sounds and colors. He used everything from the waterphone to walkie-talkies and found new ways to play the drums with a megaphone.

On stage, the group seemed to be having a great time playing together. They were all interested in what each person was playing, and were having fun chatting with each other between tunes. One could tell that they had the utmost respect for each other and for the audience, as it never felt like they were playing down a level for the listeners. On the contrary, King would look up and grin to the audience occasionally when the group was really getting intense, showing that he was having the time of his life.

After the show the group stuck around for a while to sell recordings and t-shirts and talk with people. They were all very friendly people, not at all stuck-up and pretentious, as many big name musicians commonly are. Overall the group was very entertaining, it had something that everybody could enjoy, from the elitist connie to the casual listener. It is fortunate for the Lawrence community that the Coffeehouse Committee is able to bring in such original and entertaining groups.