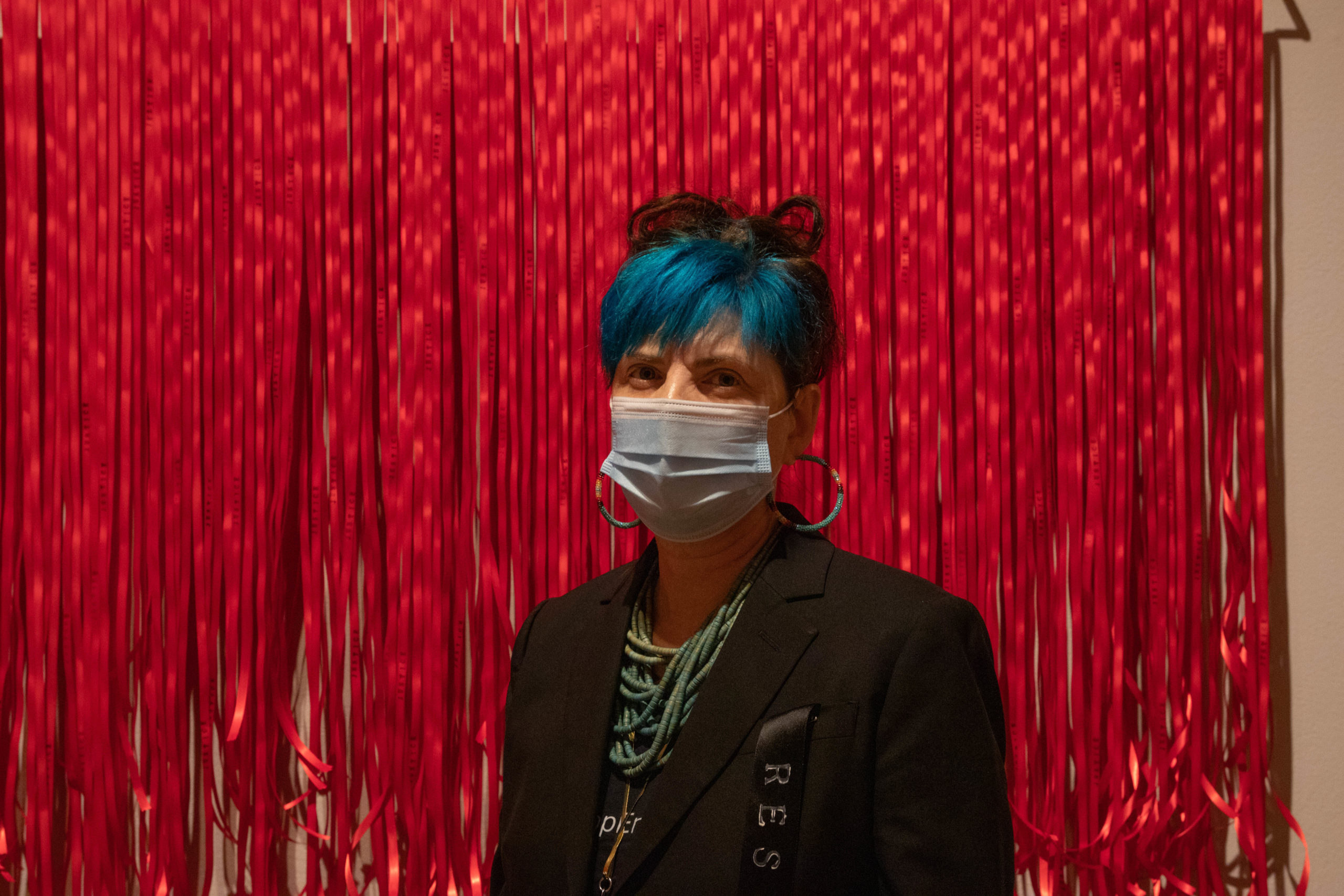 Artist Valaria Tatera gave a talk to the Lawrence community last Friday, covering topics such as tribal sovereignty, murdered and missing Indigenous women and girls and Two spirits. Tatera’s artwork will be on display in the Wriston Art Galleries through Nov. 19. Photo by Alana Melvin.

Artist Valaria Tatera spoke at the Wriston Art Galleries last Friday afternoon about her work for a captivated audience. Tatera is a Wisconsin-based contemporary visual artist, and a member of the Bad River Band of Lake Superior Chippewa. Tatera opened her talk by providing a background on her work and its purpose. She began by sharing that her artwork “addresses the impact of colonization on Indigenous erasure, visibility and resistance.” Her work “explores […] racism, tribal sovereignty […] and murdered and missing Indigenous women and girls and Two Spirits.” Advocacy is an important facet of her work, and Tatera’s work also functions as a means of healing. She provided a disclaimer that her art is not meant to speak for all Indigenous people. Although her work speaks about important social issues, it “is also my personal struggle with self-identity and historical trauma.”

Tatera provided context and explanations for Erasure, Visibility, and Resistance as well as other prior installations. Tatera stated, “In my art I like things very orderly,” which became apparent through her descriptions of her work. Good to the Last Drop, the first artwork in a continuing series about the pipeline which runs through her reservation in Northern Wisconsin, is about tribal sovereignty. The water in the piece comes from Lake Superior and is contained in small jars. She explained the importance of water, stating that “water is the essence of life […] water provides sustenance […] and cultural teachings.”

In some of her installations, Tatera “started to explore how to utilize ribbons,” which have a “cultural, historical and personal significance.” It is a powerful means of self-expression. “As an artist, ribbons are visually tactile […] they have movement and weight.” She explained her piece, You’re on Native Land, which makes use of ribbons and addresses the erasure of Indigenous people. Tatera emphasized how Indigenous people are often not included in discussions of critical race theory and political discussions, which is something she addresses in her art. “We are ghosts on our own land.”

She shared context for a piece displayed at MOMA entitled, iKill the Indian, Save the Man, which addresses the national historic tragedy of residential boarding schools. “This piece is about holding space for the survivors, the descendants, those that never made it home and about my family. It is also about being seen.” She explained the government policy of residential boarding schools, which was systematic cultural genocide. At these schools, children were abused and “you couldn’t practice cultural traditions, religions, language or dress.”

Tatera’s work is currently on display at the Wriston Art Galleries from Sept. 25 through Nov. 19.