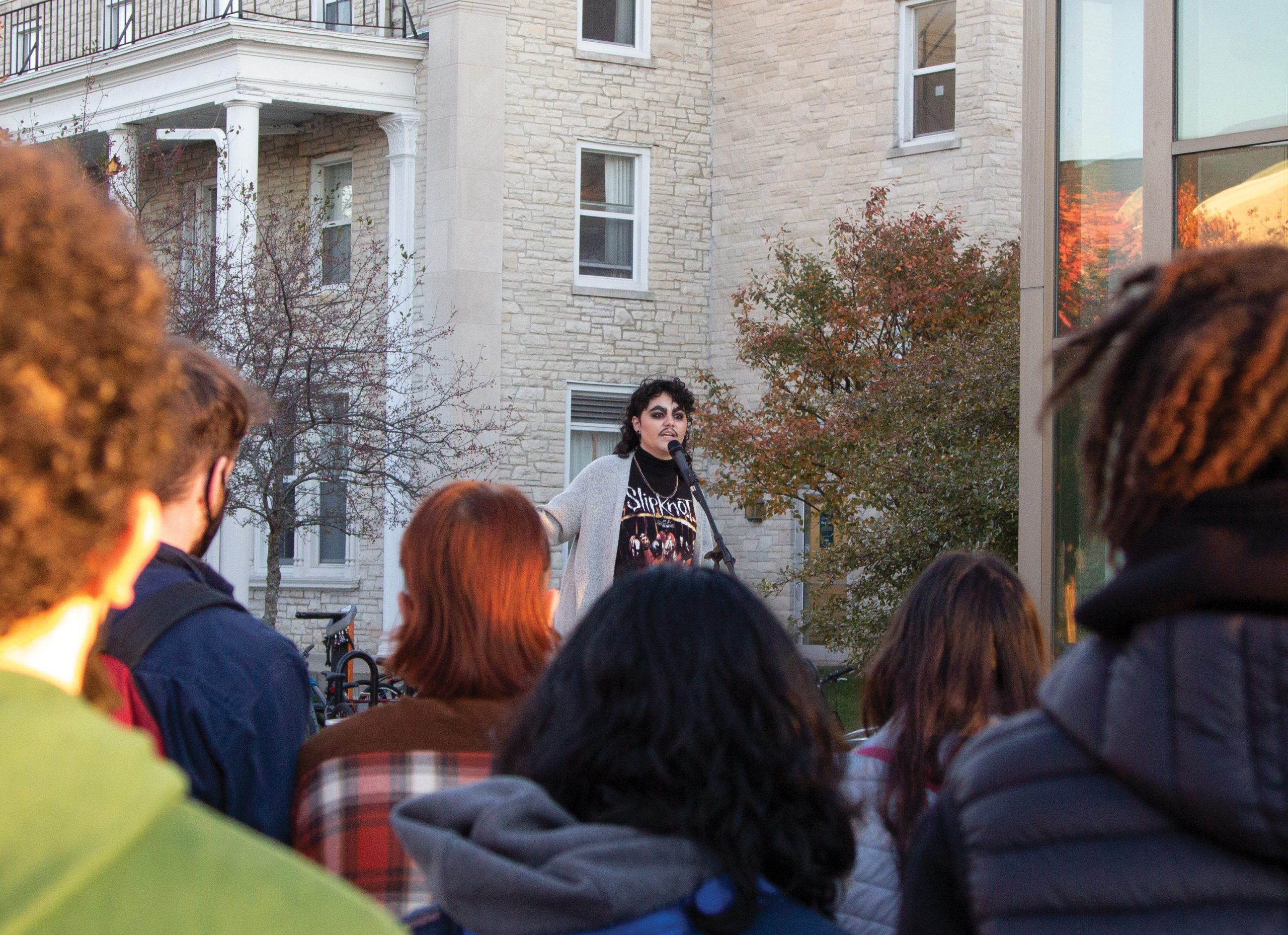 Sophomore Jonnie Urban speaks at the Appleton SDS “Fight for $15” rally outside of the Warch Campus Center on Oct. 25. Photos by Adam Fleischer

An upcoming Fair Labor Resolution, which aims to have Lawrence paying students at an hourly wage of $15, has gained support from both the LUCC Sustainability Committee and the Student Welfare Committee (SWC). The resolution will be proposed and voted on during an LUCC General Council meeting in early Winter Term and, if approved, will be passed on to President Laurie Carter to advocate for the resolution to the Board of Trustees, according to sophomore Anders Hanhan, the LUCC Sustainability co-chair.

The Fair Labor Resolution demands the minimum wage on campus to be increased to $15 per hour. The resolution furthermore emphasizes that while Lawrence University charges an average of $26,162 in tuition annually, many students are compensated with a wage of $7.25 per hour for their labor. The annual income adds up to around $4,350 on average, which is less than 20 percent of the tuition payment.

For the origins of the $15 wage movement at Lawrence, follow this link: https://www.lawrentian.com/archives/1018214.

The resolution further demands LUCC asks the Board of Trustees to allocate funds towards student worker income, raising the student worker minimum wage to $15 per hour by the start of the 2023–2024 academic year without depriving existing privileges such as financial aid, scholarships, student activities set-aside and diversity programs.

The Fair Labor Resolution originated from the demands written by Appleton Students for a Democratic Society (Appleton SDS) and has since undergone reviews and revision, according to Hanhan. The resolution was edited by Appleton SDS members as well as some LUCC committee members. The demands were first introduced at an on-campus rally on Oct. 25, in an effort to raise awareness of this continuous movement on campus.

On Oct. 29, LUCC Sustainability Committee voted on and approved the Fair Labor Resolution, according to Hanhan. Lawrence not only has to be sustainable environmentally but socially and economically as well, Hanhan said. Hanhan also said that the status quo of students being burdened with schoolwork while also working hourly to try to combat the burden of debt is not sustainable.

On Nov. 3, in an effort to push the movement forward, about 10 members of Appleton SDS attended the LUCC General Council meeting and spoke about their demands regarding raising minimum wage.

At the meeting, senior Terrance Freeman, the Appleton SDS chair, stressed the crucial function of student workers, such as mailroom workers, info desk workers and library workers, on campus. Without student workers, Freeman said, Lawrence would not function on its own.

In addition, SWC plans to promote further discussions on the resolution in Winter Term, according to senior Mikayla Frank-Martin, the SWC chair.

On Nov. 8, Frank-Martin and LUCC Vice President senior Meralis Alvarez-Morales had a meeting with Human Resources Manager Lisa Van Zeeland and Vice President for Finance and Administration Mary Alma Noonan to discuss students’ concerns over low wages on campus. After the meeting, both Van Zeeland and Alma Noonan expressed that they will take such issues into consideration as well as promote further discussions in the future.

“While I invite open conversations, this is a complex issue that does not have easy answers and is being carefully considered at a university-wide level,” Van Zeeland said. “I’m happy to share our financial information with students, just as we do to our trustees, faculty and staff. In fact, our audited financials are always posted on the website, too.”

While the fight for $15 minimum wage is happening within LUCC, Appleton SDS is continuing its activism through rallies on campus. Since last Spring Term, Appleton SDS has collected around 250 student signatures on its electronic petitions, in support of increasing minimum wage to $15 per hour, according to Freeman.

To read about SDS’s organizing efforts from Spring Term, follow this link: https://www.lawrentian.com/archives/1018754.

“While our resolution passes through…I would like to emphasize that the ‘Fight for $15’ will only come to its conclusion when the core demands of this campaign are adequately met by the Lawrence administration,” Freeman said. “We, Appleton SDS, will not settle ourselves with a set of concessions offered by the administration.”