Happy May Day, from workers around the world 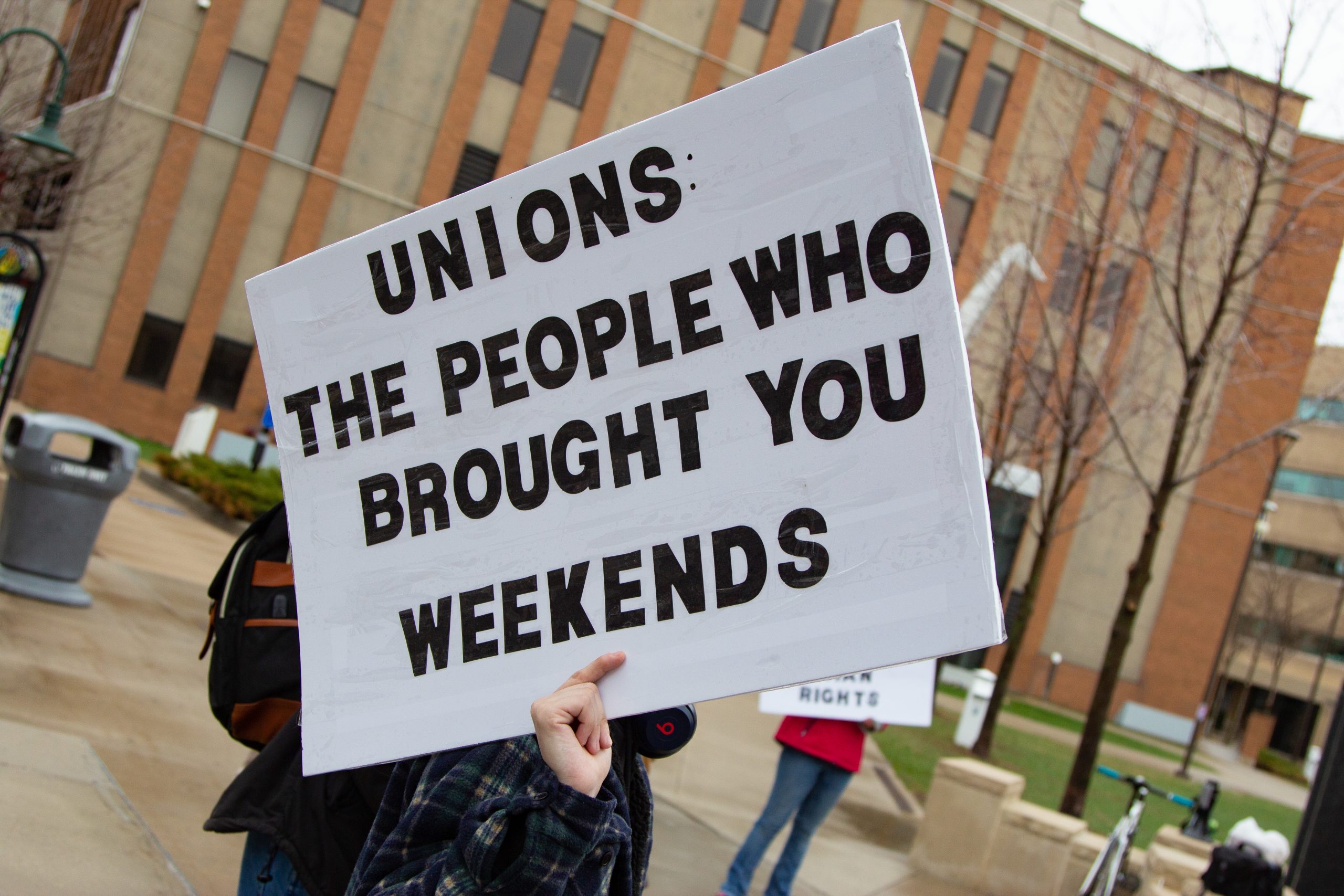 A sign held up at the May Day Rally in Appleton. Photo by Adam Fleischer.

May Day was born in 1886 in Chicago. Agricultural workers had gone on strike to fight for an eight-hour workday and better benefits. The Chicago Police Department functioned as a security force for the McCormick Harvesting Company, violently attacking demonstrators. On May 3, a bomb went off in Chicago’s Haymarket Square, and eight anarchists were accused, tried, and hanged without any actual evidence that they had set off the bomb. This event, known as the Haymarket Affair, continues to inspire workers to fight, and gave birth to International Workers’ Day.

In 2022, union activity has been breaking 2021 records, partially due to a pandemic that has continued to expose glaring inequalities in our society. According to the National Labor Relations Board, union petitions are up 57% from the same time last year. Many of these efforts are taking place at the biggest companies on Earth.

159 Starbucks locations have filed union petitions. 44 have been successful, while four have not and the rest remain to be seen. Out of those 159 petitions, 13 were filed from August through December 2021, and 146 have been this year. That’s an increase of over 1100%. The first petition was in Buffalo, N.Y., and has spread to places like Denver, Tallahassee, Chicago, New York City, Seattle and even a store in Appleton. As these petitions continue to pop up, organizers and corporate have brought in important figures to represent each side, with Howard Schultz traveling to Starbucks locations to convince workers not to unionize, a violation of the National Labor Relations Act, and U.S. Senator Bernie Sanders (I-VT) coming to support the workers.

Starbucks isn’t the only multinational corporation that has been dealing with union organizing. At the Staten Island Amazon Plant, union organizer Christian Smalls successfully won a union election, joining the Retail, Wholesale and Department Store Union (RWDSU). Going forward, the Teamsters Union is trying to unionize the Amazon facility in Nisku, Alberta, in the Edmonton area. The election in Bessemer, Ala., that the National Labor Relations Board ordered a do-over for, is still uncalled. Furthermore, an Apple store at the Cumberland Mall in Atlanta has become the first Apple store to file a union petition.

College students and faculty are also demanding their rights. At Kenyon College in Ohio and Wesleyan University in Connecticut, students working as Community Advisors and Residential Advisors have been organizing for higher wages and more of a say in campus policies. In mid-April, Kenyon’s CAs went on strike. Student food workers at Grinnell College in Iowa formed a union in 2016, and the college administration has been hostile towards attempts to expand the union to cover all student workers. In March, student workers at Dartmouth College in New Hampshire voted to form a union. Lawrence has seen its fair share of student organizing too, from the CAs asking for a higher stipend at the beginning of this school year to the recent efforts by student workers in the Commons to increase their break times and pay.

Workers in all sorts of other industries not traditionally represented by unions are continuing to unionize and organize, including theater workers in Columbus, Ohio, faculty at Santa Clara University in California and dancers at Star Garden Topless Dive Bar in North Hollywood, Calif. Cannabis workers, nonprofit employees, bus drivers and pharmacy workers are joining in on the fun. Even staff in the offices of Congressional Democrats have been organizing for better pay and treatment.

It’s not just in the United States. In 2020, around 250 million farmers went on strike to protest Indian Prime Minister Narendra Modi’s proposed neoliberal agricultural reforms, and on May Day 2022, thousands of workers in Panama, Ecuador and Brazil rallied and protested against their neoliberal governments. In Bolivia, President Luis Arce led May Day marches in the cities of Oruro and La Paz, where students, housewives, farmers and workers from many other industries marched with him; regardless of borders, workers around the world are rising up and demanding more.

This movement is nothing new. Unions and labor rights have been decimated during every presidency since the neoliberal administrations of Jimmy Carter and Ronald Reagan. Yes, even your favorite ones. This movement has been brewing for decades, and I encourage the workers of the world to stand up and keep demanding democracy in the workplace.
Happy May Day. United we bargain, divided we beg!