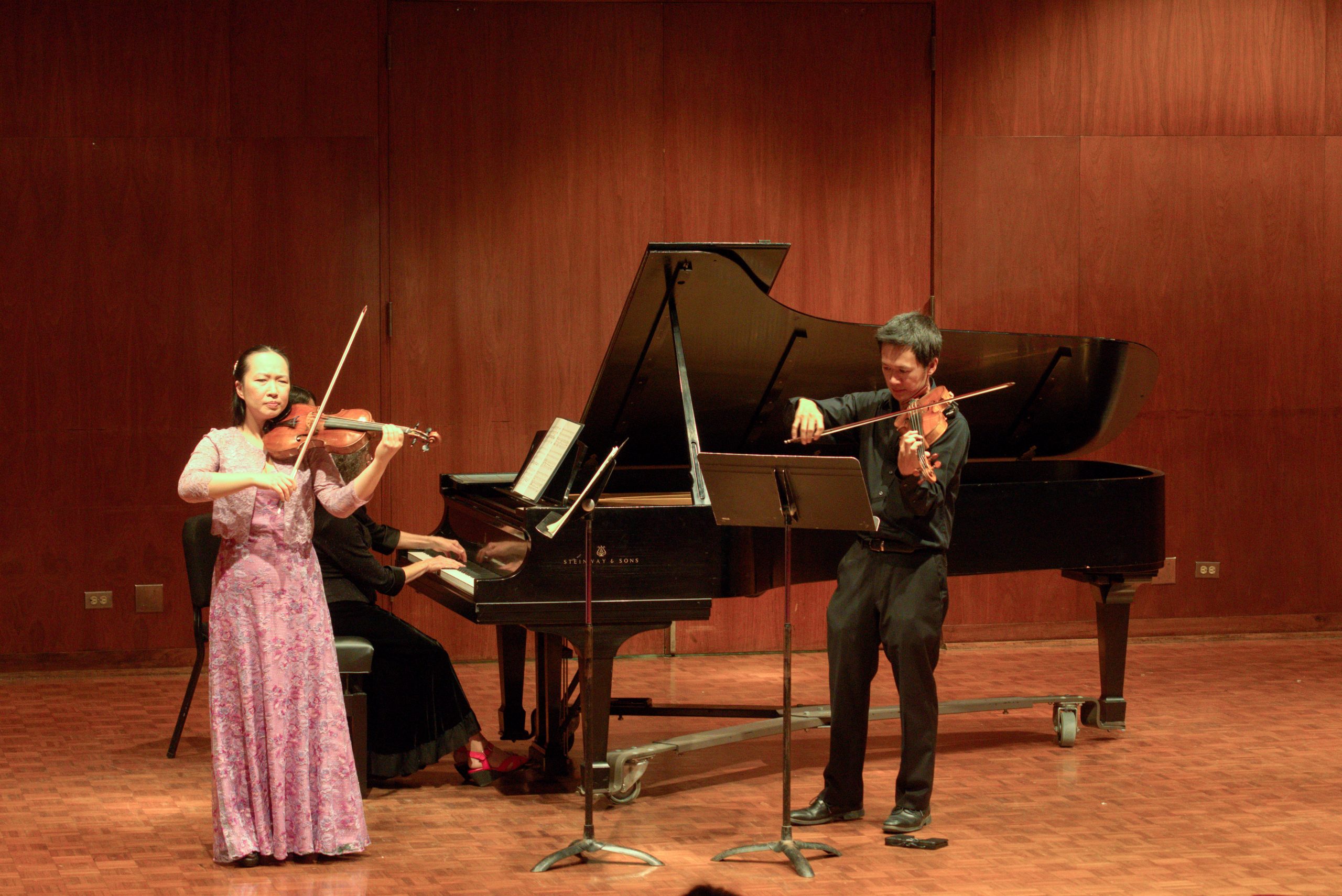 Guest performer Gregory Lee joined Lawrence’s George and Marjorie Olsen Chandler Professor of Music Catherine Kautsky, pianist, and Associate Professor of Music Wen-Lei Gu, violinist, for a well-attended recital in Harper Hall on Monday, Oct. 3. Lee is a professor of violin at the University of Oklahoma and concertmaster of the Oklahoma City Philharmonic.

The program began with Brahms’ Sonata No. 1 for Violin and Piano in G major, op.78, performed by Kautsky and Lee. The first movement of this sonata, vivace ma non troppo, displayed within it a great variety of characters.

It started with a simple, easily flowing melody, as though depicting an idyllic landscape. This melody recurred throughout the movement, interspersed with moments of structured firmness, dejection, passion and even some dance-like passages.

Lee characterized this sonata as “introspective,” and from just the first movement, its range of moods as well as an overarching spirit of intimacy did seem to convey inner struggle. The audience eagerly applauded after this first movement, setting a pattern for enthusiastic acknowledgement of the performers that continued throughout the recital.

The second movement, adagio, began slowly and with sincere sadness but soon became more forceful, with ascending and descending lines in the violin punctuated by chords in the piano. As the earlier feeling of melancholy returned in the violin, figures in the piano maintained a sense of motion before transitioning to somber chords, reminiscent of a funeral march. The movement ultimately took an unexpected final turn, ending on a lighter, more hopeful note.

In the third and final movement, allegro molto moderato, the violin took charge from the beginning, with a confident assertiveness matched by energetic arpeggios in the piano. In some sections the intensity subsided, and the music became more playful. Towards the end of the movement, the music became settled, ending in a resolved and pensive state.

After a short break, Gu and Lee took the stage for the second piece of the program, Leclair’s Sonata No. 5 for Two Violins in E minor, op. 3. Leclair lived in a different country (France instead of Germany) and a different time period (Baroque instead of Romantic) from Brahms, and the style of this sonata was accordingly in contrast to the previous.

The first movement, allegro ma poco, started and ended with energetic canon-like sections in which a melody begun by one violin was promptly imitated by the other so that the beginning of one line intertwined with the ending of another. The music was agile and ornamented with sparkling trills.

The second movement, Gavotte: andante grazioso, was in the character of a graceful, moderately paced dance, as its title would suggest. It served as a nice break after the emotional turmoil of Brahms and the ceaseless energy of Leclair’s first movement.

The final movement of this sonata was similar to the first movement in its character and canon-like structure. Through rapid passages, the two violins remained in satisfying harmony and synchronization, like one entity, before reaching a triumphant end.

Next, all three performers finally shared the stage together, jumping into 20th-century Russia for Shostakovich’s Five Pieces for Two Violins and Piano, arranged by Levon Atovmyan. Lee prepared us for what we were about to hear by explaining that “unlike typical Shostakovich […] there’s no biting grotesqueness [or] dissonance,” and instead characterizing the set as “charming.”

The first of the pieces, Prelude, began with only piano. The violins came in simultaneously, in harmony, shortly thereafter, as if the curtain had been drawn back on a scene of two lovers tenderly expressing their dedication to each other. The undulating piano continued to serve as a backdrop for the two lovers as they picked up the pace for a section in which I pictured them galivanting through a meadow together, before resuming their original character.

The next piece, Gavotte, was a bouncy, airy, almost frivolous piece with a contrasting, slightly more laid-back middle section. It ended with a plucked note from the violins together with a staccato from the piano, getting a laugh from the audience.

For a complete mood change, the following piece was an Elegy. The violins together mourned a loss as the piano again provided a sense of constancy in the background. For a brief moment, the violins took on the fluttery character of a butterfly, but they soon returned to their previous grief.

The fourth piece in this set was a Waltz, in which the classic down-up-up rhythm of the piano gave momentum to the music, keeping the carefree melodies of the violins aloft.

The final piece of this set was a brisk and spirited Polka. The music slowed as if moving into a more solemn section as it neared the end, but it finished by promptly regaining its liveliness.

To conclude the program, Gu, Kautsky and Lee performed Suite for Two Violins and Piano in G minor, op. 71 by Moszkowski. The first movement, allegro energico, began with and continuously returned to a stormy and emphatic character. Amidst this storm came the calm, including a touching solo section played by Gu.

The second movement, allegro moderato, was warm and heartfelt. Some sections were conversational in nature, with the piano and each violin passing around different iterations of the same theme, expressing both unity and individuality in their voices.

The third movement, lento assai, was nostalgic, meditative and a tinge bittersweet, like someone reflecting on fond memories, while the final movement, molto vivace, had some heartiness and spunk to it. After a serene middle section, the piece ended in a torrent of focused speed.

Overall, this guest-faculty recital featured compositions from a range of time periods, countries and styles, performed by different combinations of instruments, and it made an impressive display of emotional variety, making it possible for each of us in the audience to feel a connection with the performance.