“Being Funny in a Foreign Language”: not that funny, too many languages 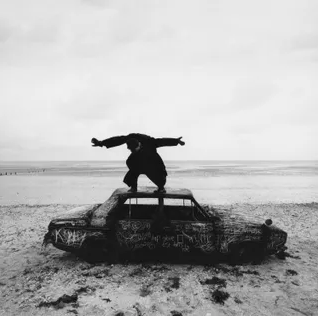 Indie electropop band The 1975 released their fifth album, “Being Funny in a Foreign Language,” on Oct. 14, 2022. The group consists of Matthew “Matty” Healy on vocals, Ross MacDonald on bass, George Daniel on drums and Adam Hann on guitar.

Following the sporadic critical acclaim of their last record, “Notes on a Conditional Form,” The 1975 knew they had to focus. At its best, “Notes” featured some great pop songs; at its worst, it slugged on without much substance. Twenty-two tracks on one record lends itself to both monotony and inconsistency.

This is likely why the band cut the track length in half on “Being Funny in a Foreign Language,” clocking in at 11 tracks and 44 minutes. Cutthroat pop producer Jack Antonoff — who has worked with the likes of Taylor Swift, Lana Del Rey and Lorde — also joins the mix. The records Antonoff has helped to create are considered masterpieces in the pop music canon because of their sharp edge of focus.

Unfortunately, this focus hardly comes to fruition on “Being Funny.” This is evident in the album’s lead single, “Part of the Band.” I’ll admit, I have a soft spot for this song: its rambling lyrics, string work and rickety melodies charm me on every listen.

But behind this charm comes frankly bizarre commentary without much substance. Healy sings about falling in love, queerness, cancel culture, drug use and everything in between. The lack of attention on any one given topic leaves the song in a very liminal space, but at least it’s somewhat self-aware: “Am I ironically woke? The butt of my joke?”

The problems in “Part of the Band” permeate through the rest of the record. While the band may be self-aware of their scatter-brained nature, it comes off incredibly limp.

“The 1975,” “Being Funny”’s opener, sets this tone. While I enjoy Antonoff’s production and the tune at the heart, Healy again rants about practically everything under today’s sun: QAnon conspiracies, the American Dream, mental illness and endlessly scrolling on social media. “I’m sorry if you’re living and you’re 17” is the only lyric that mildly ties these ideas together.

I was expecting these dystopian, modern-day issues to be somewhat resolved throughout the record. That is to be expected when you set a problem — resolution. However, the band resorts to a myriad of cuts about love to varying degrees of success.

It’s hard to say whether this love is the resolution. “Happiness,” while glistening with its slap-bass and danceable groove, features strangely sparse lyrics given the opener. Maybe that was intentional, but it’s as if the song doesn’t know itself — getting lost in its instrumentation, never quite escaping the abstract. It is a fun listen, as with most of this record, but I don’t get much of anything out of it.

“Looking For Somebody (To Love)” and “Oh Caroline” pull the veil off slightly more but are quickly masked by their production again. To reiterate, the music is good: I love how electric and exhilarating these two tracks are. However, the explicit nature of “Part of the Band” feels forgotten on these cuts, despite the fact that they sandwich “Part of the Band” on the album.

By the midpoint of the record, it’s hard to say what point The 1975 are trying to make. Are they setting up a broad critical analysis of the powers that be, or are they falling in love? This wouldn’t be a problem if these narratives were threaded together in an intimate and unique way. In fact, the band does this on one of the tracks.

“All I Need to Hear,” a clear highlight musically and lyrically, is a stereotypical but beautifully profound ballad. By juxtaposing the dystopian world with the longing of Healy’s vocals and lyrics, The 1975 display a sharp conscience for pop music that I wish they tapped into more on “Being Funny.” With each listen, it becomes increasingly heart-wrenching and ultimately timeless.

One of my favorite lyrics in the track describes how Healy doesn’t need to hear the “music” or “crowds and the cheers”; all he needs to hear is that his subject loves him. This is hilariously ironic considering how fickle and fluffed the rest of the album is, covering half-baked narratives with grandiose instrumentation. I interpret this point as intentional, however — I just wish we got there sooner.

The rest of the record drifts by, featuring mildly interesting music with the same narrative problems. “Wintering” features a cool concept but suffers from surrounding tracks; “Human Too” boasts unique production in the context of the album but a notably weak chorus; “About You” attempts to be an anthem but coasts too much to leave an impact.

The closer, “When We Are Together,” tries to wrap the bow on “Being Funny,” but it only leaves me scratching my head. It’s set up as this stripped-back and heartfelt song with lyrics professing love for Healy’s subject. Yet, oddly enough, the critical commentary comes back as a last-ditch effort to make the record seem cohesive. Some of the last lines are about wearing socks with sandals and cancel culture, which, in my opinion, doesn’t make sense, considering how lovelorn a majority of the record is.

I suppose I might not understand “Being Funny” quite yet. Maybe the polar narratives The 1975 set up will be explored as time passes by; but given how fleeting pop culture is nowadays, I highly doubt it. At least I can say the music here is generally fine, albeit inconsistent: every instrumental has some character and charm. I’m just left wanting something richer.