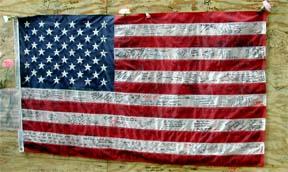 This flag was on display at Ground Zero.
Cameron Kramlich

This flag was on display at Ground Zero. (Cameron Kramlich)

I recently took the opportunity to visit Ground Zero. All over New York there are shrines decorating firehouses with pictures of loved ones and messages of empathy. As I exited the subway at City Hall Station, the heavy mist provided an ethereal accent to the banality of city life. As I walked west, after I crossed Broadway, the city grew quiet. I could see the Mrs. Field’s and J&R stores open for business, yet something was not quite normal.

Folks were polite, and people were not talking. I had entered a place of worship.

Next to a church, a giant wooden observation platform rose above the rubble, adorned with countless messages of “God bless America” and “We shall overcome.” It was difficult to suppress the emotions building up inside my body. Damaged buildings surrounded the area, wrapped in thick black mesh and draped with American flags. From the edge of the platform, the contrast was striking.

Where death and destruction occurred on Sept. 11, we found a gigantic construction site.

Near this pit was a pole with two street signs pointing in perpendicular directions. Drivers had the option of heading toward the WTC site or uptown. Barriers prevented traffic from entering the bottomless pit, so the taxicabs and delivery trucks headed north.

America faces a similar juncture. As we rebuild our national confidence and try to repair the tattered process for peace in the Middle East, we need to decide whether to turn inward or outward.

Attorney General Ashcroft has placed significant barriers to the reconstruction of a liberal democracy where citizens can savor justice, freedom, and equality.

Engaged in a bombing campaign that has so far failed to dampen terrorism in the Middle East or bring Al Qaeda to justice, we Americans have far more blood on our hands from thousands of Afghan civilians than terrorists have from the martyrs who died on Sept. 11.

Our representatives in Washington, D.C. have decided that, to preserve democracy, we need to place significant restrictions on the thoughts and actions of citizens.

Did the terrorists win?