Warch explains the future of the Lawrence campus 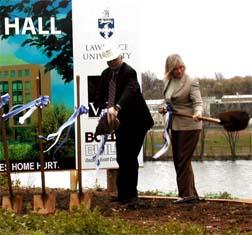 Building on the speech he has been giving around the country, President Warch explained in depth his vision of architecture and campus planning for the future.In the May 3 edition of The Lawrentian, Bill Hodgkiss outlined the process for choosing an architectural firm and site for new buildings, but before that is done, there must be a general vision for what the campus should look like according to Warch.

“The key is to be sure that what you’re doing now fits with some larger sense of what you might do in the future,” said Warch. He believes administration has maintained this philosophy by keeping residential buildings together as well as preserving an academic area. According to Warch, Lawrence tries to group all new buildings into three zones. Excluding the area by Alexander, they are an east residential zone, a west residential zone, and academic core that runs from the conservatory to Briggs Hall. Sasaki, Lawrence’s campus planner, recommends the site for new buildings within the zones with Lawrence administration having the final say on where the new buildings will be placed.

With the new dorm, Sasaki recommended and Lawrence administration agreed that a larger residence hall should be placed on the west end of campus without destroying an existing residence hall.

Once the administration has decided on a building site that will fit well with the campus, the architecture is chosen with the same focus of maintaining campus unity and flow, according to Warch. “We’re looking to integrate the architecture; we’re not looking to build retrograde buildings that look like they’ve been here for one hundred years. We could have gone and said, ‘Let’s build another science building that looks like it was designed in 1960.That way it will look at lot like Youngchild.’ It seems to me that would not be a very imaginative approach to campus architecture,” said Warch.

Warch admits that the architecture is eclectic, but says that they administration has been very attentive when deciding on design. There is careful reasoning behind each plan chosen. For example, if a stranger were to walk around campus, they would probably pick out the Wriston Art Center as the art building and New Science Hall as the science facility. The idea is not to make everything look exactly the same, according to Warch. “You want to do what you’re doing today in order to permit and promote what someone might choose to do tomorrow,” he added.

As for future housing, increasing enrolment will dictate what will be needed. Sasaki has recommended smaller residence halls on the east side of campus by the fraternity quadrangle, but Warch stressed these plans were “very, very, very long term.” He said that the placement of the new campus center will largely direct this placement. The current site favored by administration runs north-south along the fraternity quad to Hulbert House. It will require two to four quadrangle houses to be torn down as well as Hulbert House, according to Warch.

As for potential plans, Warch acknowledges that there will be a need for renovation on existing dorms in the future, although no date or specific plan has been cemented. He reiterated that there are no plans to ever build on Main Hall green saying, “Main Hall green remains essentially sacrosanct,” and that building there “would compromise, probably destroy, the character of the campus in ways that we would live to regret.”