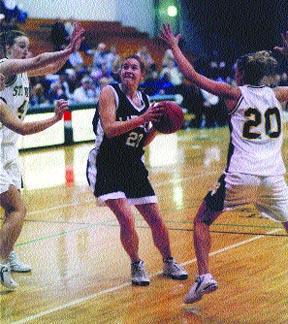 The Lawrence University women’s basketball team kept pace in the Midwest Conference race last weekend by defeating Grinnell 66-22 and Monmouth 56-49. The Vikings are now in second place in the Midwest Conference, only two games behind leader Carroll.”This weekend will show our character as a team, after our setback against St. Norbert,” said Lawrence coach Amy Proctor before the matchup.

Friday night Grinnell gave Lawrence no trouble at all. The closest they got was 8-7 with 11:43 left in the first half, as the Vikings dominated the rest of the half, finishing it with a four minute, 14-0 run, capped by freshman guard Jessi Schmidt’s six points. Lawrence went into the locker room with a commanding 30-14 lead.

Schmidt led the team with eleven points at the break, but failed to score in the second half. With the game wide open, Proctor used this opportunity to give the Viking bench some action. Every player got in the game, and only two players did not score.

Lawrence’s bench was up to the task. They kept the pressure on the Pioneers, at one point holding them scoreless for a 7:37 stretch.

With the end of the bench in the game, the Vikings coasted to an easy 66-22 victory. Sophomore forward Marie Molter led the Vikings with a season-high twelve points and ten rebounds.

“I was pleased with my game, but I could have been quicker.” Molter said.

After their easy win Friday night, the Vikings immediately looked towards Saturday afternoon’s match-up against the Monmouth Scots.

“This will be an important game for us, they are tough and we only beat them by ten last game,” said freshman guard Felice Porrata prior to the game.

“Monmouth is a good opponent, if we win we will be 10-3 in the conference and have a good chance at catching Carroll for the conference title,” said Proctor.

On Saturday, however, all thoughts of conference titles were put on hold, as the team turned their focus toward beating the Monmouth Scots

Both teams started in sloppy fashion. While Lawrence’s defense looked good, it was the exact opposite for the offense. Both teams went back and forth without much scoring. Five minutes into the game Lawrence held a slim 4-2 advantage.

Neither team took good care of the ball as both teams had fourteen turnovers. The scoring picked up near the end of the half as Lawrence got hot from the field and Monmouth hit their free throws. At the half Lawrence held a precarious 28-21 lead. Lawrence shot 46 percent from the field in the first half, while Monmouth struggled, shooting only 24 percent.

As the second half began, LU was out-rebounded by a huge margin. Proctor, unhappy with her squad, substituted five new players into the game, just two minutes into the half.

Despite the lead, the fans were not happy with the calls from the officials. Monmouth went to the free throw line often, and took advantage of it. They hit 72 percent of their free throws, and, with 4:25 left in the game, had closed the LU lead to 50-46.

The leadership of senior guards Beth Pollnow and Dara Rakun took over in the final minutes, helping LU claim their 56-49 victory over the Scots. Rakun finished with sixteen points to lead the Vikings.

“It was time for us to step it up, and the five starters did just that,” Pollnow said.

Pollnow’s two assists in the game pulled her to within nine of the all-time Lawrence record of 386, currently held by Jackie Huss.

With the win, LU advanced to 10-3 in the Midwest conference, and, with a Carroll loss, could host the conference title game on Feb. 13.

Not a single Viking, however, is thinking about that game. “We have to take it one game at a time, and worry about Beloit first,” Rakun said.

Proctor agrees, “We will take it one game at a time, and when Carroll is next on our schedule, we will worry about them.”

The Vikings are on the road next weekend, taking on Beloit on Saturday afternoon. They will return home to Alexander Gym for the final home conference game of the season, against first place Carroll on Feb. 13.