Stankonia: Originality from the “Dirty South 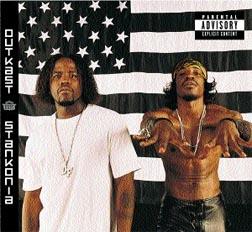 Since Outkast’s debut album burst into the scene in 1994, this Atlanta based hip-hop duo has thrilled listeners with four albums of unique rap music, each one a more brilliant contribution than the last. Known as “Andre 3000” and “Big Boi,” these two artists reached their musical peak with their 2001 release Stankonia. With its recent Grammy nomination, this album has finally earned Outkast well-overdue, universal acknowledgement from the musical community.The title of the album speaks to their overall sound, inviting the listener to a world of fluid, poetic rap mixed with hot hip-hop beats and deep, dirty, southern funk. The album never grows stagnant in its 24 tracks; every single one commands attention in its honesty and musical genius, regardless of whether one happens to enjoy the sound. Not since Mos Def and Talib Kweli released their Black Star project in 1998 has the hip-hop community produced ideas and concepts this original, universal, and lasting. Whether you prefer their innovative beats, masterful lyrical talents, or their overall message and feel, you can surely find something to relate to in Outkast’s music, something that transcends the obstacles of taste and opinion and displays an undeniable greatness.

People complain about hip-hop, often rightfully so. They say that every song sounds the same, or that they lack melody and variety of form. Stankonia is an album for anyone who has ever suggested that hip-hop lacks musicality. Songs like “”B.O.B (Bombs Over Baghdad)” and “Gasoline Dreams” burn with an upbeat mix of rock and techno rhythms, overlain by blindingly quick rap flows. “Stank Love” and “Gangsta Shit” bring the laid-back, in-the-pocket funk reminiscent of George Clinton. “Humble Mumble” combines jungle rhythms with conventional hip-hop. “Ms. Jackson,” “So Fresh,” and “So Clean” lay down the straight, head-nodding rap beats worthy of blaring from any Cadillac’s trunk.

Their rhythmic flexibility, however, serves as a mere background for the true focus of the music: their lyrical and complex rhyming talents. Andre 3000 and Big Boi rap fluidly at any speed and over any tempo, combining fast beats with slow lyrics, vice versa, and everything in between. Songs like “Slum Beautiful” and “I’ll Call Before I Come” show off their ability to maintain a melodic sensibility, even while navigating difficult rhyming schemes.

Music analysis alone would suffice to acclaim this duo’s efforts, but one cannot ignore the conceptual message of the album, which gives it a larger-than-life status. Andre 3000 and Big Boi speak with a controversial yet honest voice that, though it can be criticized, cannot be ignored. Though they obscure their messages behind imagery that at times seems worthy of a literary analysis thesis, certain ideas ring clear throughout. Some songs paint disturbing and sad images of inner city life, many talk of the frustrations and hypocrisies of living and loving in a modern world of divorce and child support, taxes, pre-nuptial agreements, make-up, and sex. Sure, they throw in the occasionally shallow jam, which raps of cars, drugs, and women, but rarely will they do so without adding an element of social criticism. (Apparently they are not dissuaded by the controversy between appreciating inner city life while criticizing its downsides.)

Outkast should definitely win Album of the Year for Stankonia. As opposed to their competition (two musical stalwarts already loaded with awards, a soundtrack, and a still developing artist), Outkast is a group that has just reached full maturity, and has been making the most recent and significant contributions to music, which until now have gone sorely unnoticed. It is high time that they start accumulating recognition of their unique and undeniable artistry.