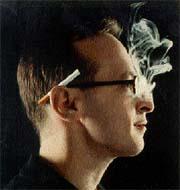 David Sedaris, author and humorist, will be visiting Lawrence this coming Tuesday. He will be giving a rare evening convocation.
Peter Gillette

David Sedaris, author and humorist, will be visiting Lawrence this coming Tuesday. He will be giving a rare evening convocation. (BUST Magazine)

Humorist, playwright, and NPR commentator David Sedaris will deliver a convocation Tuesday evening at 7:10 p.m. in the chapel.Sedaris’ work includes Naked, Barrel Fever, Holidays on Ice, and the recent smash hit Me Talk Pretty One Day.

The Paris, France resident (by way of New York, by way of North Carolina) extracts comedy from the most diverse of moments; it has been said that he’s very funny.

His breakout one-man play, The Santaland Diaries, confronts the trials and tribulations of being an elf at Macy’s. The play proved to be the cornerstone of Sedaris’ reputation when he read it in 1992 on NPR’s Morning Edition. NPR stations are typically near the bottom of the FM dial, near the 90 or 91 frequencies.

Lawrence student Anne Hyde saw Sedaris, who lectures with some frequency while in the states, speak in Madison. Hyde said Sedaris read a handful of stories–some of them works in progress being road-tested–and added his own commentary in between.

The great part about it, Hyde said, was how he was able to read everything with a straight face. She added that he was particularly generous and genial when greeting fans after the performance.

Indeed, widespread exposure from Me Talk Pretty One Day, Morning Edition, and NPR’s This American Life assures that Sedaris’ fans come from a variety of places. In an interview with The Onion AV Club, Sedaris said of his lecture audiences, “Sometimes, there’ll be a college student sitting next to some grandparents sitting next to a Japanese person. It’s all over the place. I look at them sometimes and think, ‘What are you doing here? Why are you—why?’

“Because it’s just not… When you’re on the radio, you don’t even imagine an audience. You’re just in a room, by yourself. It’s the same thing when you’re writing. You don’t really imagine anybody on the other end.”

Sedaris often touches on his family life, growing up gay in the very not-gay South, working, and, perhaps most notably, communication.

Many of the stories in Me Talk Pretty One Day address communication, including “Jesus Shaves,” about a French class in France where a group of diverse foreigners all speaking a second language try to explain Easter to a Muslim, addressing religion and making readers laugh along the way.

With his bestseller, Sedaris is hitting the big-time, some would say.

A book signing will follow the convocation. Sedaris’ books are on sale at many bookstores in the area and online.